BOMBSHELL: SHADOW POPE AT THE SYNOD? ONE OF THE POPES INCAPACITATED? 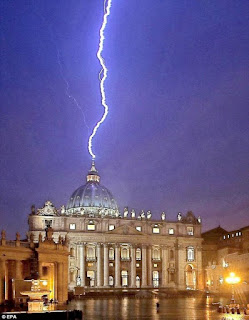 When a pope resigns there is always the possibility of having two popes as we do today. But we all know that there can't be two living popes. One or the other isn't.

Thus this bombshell statement from Cardinal Marx (as reported by CRUX and you can read the entire depressing article there) which highlights in a way I have never seen in my 61 years as a Catholic that we may well be on the verge of a schism with either Germany or the Vatican leading it and one of the two popes behind it:

The dispute between conservative Cardinal George Pell of Australia and the more liberal German bishops broke out into the open Wednesday, with the Germans saying they felt “dismay and sadness” that Pell had fostered division in the synod with his recent public remarks.

The German bishops favor a proposal put forth by German Cardinal Walter Kasper to allow divorced Catholics who remarried without an annulment of their first marriage to receive Communion, as determined on a case-by-case basis. Pell and other conservatives oppose the idea, fearing it will dilute the Church’s teaching that marriage is indissoluble.

German Cardinal Reinhard Marx said (Cardinal) Pell’s recent remarks that set up the disagreement as a battle between supporters of Kasper and followers of Pope Emeritus Benedict XVI was unhelpful and “contradicts the spirit of cooperation.”

And then this little ditty from John Allen from the same Crux publication today!

The German report also featured an unusual public complaint about others in the synod, expressing “sadness and dismay” over the public comments of some unnamed participants.

During the daily news briefing, Cardinal Reinhard Marx of Germany lifted the veil by naming whom they had in mind: Australian Cardinal George Pell, who in an interview with Le Figaro, had phrased the division over the divorced and remarried as a battle between followers of German Cardinal Walter Kasper and Emeritus Pope Benedict XVI, using his given name, Ratzinger.
Finally, the day also got a jolt from a report in an Italian newspaper that Pope Francis has a curable brain tumor. That claim has been denied twice by the Vatican in remarkably strong terms as “unfounded,” “seriously irresponsible” and “completely unjustifiable.”
Though there was no overt evidence that the report was timed to coincide with the synod, some observers in Rome couldn’t help but wonder if it was a preemptive strike — a way of casting doubt on the solidity of the pope’s judgment and thus putting the credibility of whatever decisions he’ll make based on the synod into doubt.

MY FINAL COMMENT: All I can say is WOW and UNBELIEVABLE!

If Pope Francis does have an incurable brain tumour - although denied - that could well be why he has been so changeable during his papacy so far, and possibly being blamed for something he cannot help.

Then, the Pope looks and says, "which of you bishop in Germany is in union with the See of Peter and the Magisterium? Then, when the three of five whom I think state that they are, along with Muller, then he suppresses all existing dioceses in Germany and creates three or whatever new ones and instructs all faithful Catholic to follow the bishop in union with him. So, we lost property. Big deal. The Church is not buildings. It is people united with a bishop united with Peter.

As for which one, well; you're right Father, there an only be one, but let's not go there, at least not yet.

Jan, yes, it could explain a lot. If that is the case, the Benedict has shown the example.

This is both fascinating and distressing at the same time.

It makes me wonder how the German bishops see themselves... Do they really think they're Nicholas in this, or are they self-aware enough to know they're Arius?

You know, the Germans are a real hoot...sado-masochistic automatons, with an abstruse and inscrutable philosophical tradition, who goose-step off, lemming-like, every century or so, led by some megalomanic dictator, toward some insane goal of world conquest. They do make fine weapons, however.

Gene, it has appeared in the past that the Germans came up with and executed their plans as part of some intellectual or philosophical experiment. In this instance, it's rather clear that the German bishops are solely concerned about money.

"We are witnessing the betrayal of Christianity by those who are prepared to accommodate themselves to a secular, godless and churchless world." This is from a statement to the Synod by Metropolitan Hilarian of the Russian Church, the full contents of which are worth reading here.

This is getting curiouser and curiouser

I had a similar thought. For the good of the Church in Germany, some strong action
is needed to reign it in, and then proceed to re-build on what faithful remnant remains.

The whole dang synod reminds me of the wonderful scene in Alice where she asks the Cheshire Cat, "Sir, which way should I go?"
Cheshire Cat: "Well, it all depends on where you want to get to."
Alice: "I don't know."
Cheshire Cat: "Then it doesn't matter which way you go."