THE DEVIL AND THE POPE FRANCIS 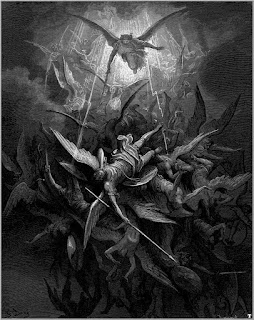 Pope Francis constantly speaks about the devil every chance His Holiness gets. He has done so this morning at His Holiness' daily Mass at the Chapel of His Holiness' place of residence, the Vatican Motel 6.

One has to know that liberal, heterodox Catholics, especially academics, hate the concept of angels in the first place and a super-powerful fallen angel called Lucifer. Speaking about the devil as Pope Francis does and with alarming frequency would be anathema to them, ANATHEMA I SAY!

My clairvoyance tells me that the devil will be included in the final exhortation the Holy Father writes concerning the recommendations of the Synod on the Family. I think this morning's homily is interesting in light of the bishops meeting at the Synod to say the least!

(Vatican Radio)  The Christian must discern all things, even when everything is going well.  That was at the heart of Pope Francis’ homily at Mass on Friday morning in the chapel of the Casa Santa Marta in the Vatican.

At his Friday morning Mass at the Casa Santa Marta, Pope Francis focused his remarks on the necessity of discernment of situations, whether it seems to come from God or from the evil one “who always seeks to deceive, to make us choose the wrong path”.

In Friday’s Gospel reading, Jesus drives out a demon, doing good to the man once afflicted, but some from the crowd of witnesses accuse him of being in league with Beelzebul.

“There was another group,” the Holy Father said, “that did not appreciate him and sought to interpret Jesus’ words and actions in a different way, against Jesus. Some, for envy, others for doctrinal rigidity, others because they were afraid that the Romans would come and massacre them; for many reasons they sought to distance Jesus’ authority from the people, even with slander as in this case.”

Against such misinterpretations of a situation, Pope Francis invited Christians to discern the roots of any given situation, because in the life of faith “temptations always return, the Evil Spirit never tires”.

“The Evil One is hidden,” the Pope said, “he comes with his very educated friends, knocks at the door, asks for permission, comes in, and lives with that person.  Drop by drop, he gives him instructions” on how to “do things with relativism”.

Pope Francis continued, saying “Anesthetize the conscience.  This is a great evil.  When the Evil Spirit succeeds in anesthetizing the conscience, it is then he can claim a true victory, for he has become the master of that conscience.”

What can one do against such attacks?  “Watchfulness,” the Holy Father said, “The Church counsels us to always make an examination of conscience:  what happened today in my heart because of this?”  “Discernement”, he concluded, “From where do these comments, words, teachings come? Who says this? Let us ask the Lord for this grace: the grace of discernment and of watchfulness.”

My comment: As I said in my post below, the Supreme Pontiff's exhortation following the completion of the Synod on the Family will seek to instill in all Catholics the necessity of the last thing I highlight in red Pope Francis said in his morning homily:

“The Church counsels us to always make an examination of conscience(!)"
Posted by Fr. Allan J. McDonald at Friday, October 09, 2015

I think we all agree that the devil will feature prominently in the pope's post-synodal exhortation. I'm sure that you would disagree, though, with my opinion as to what his role will be in that document...

With all respect, is it possible he is suffering from dementia or some other form of mental illness? I am not trying to be disrespectful, I am being honest. He says one thing and then another. His words on the devil or fine and then he allows the synod to be manipulated and the facts to be filtered through a lens of some that may have an agenda.

This is not a normal papacy.

We are in a grave crisis.

Pope Benedict used the phrase "anaesthetize the conscience" in reference to pharmacists selling abortion pills (Pope Francis seems to be quoting him all the time at the moment).

My googling suggests that the earliest Catholic use of the phrase is in Cardinal Schoenborn's book With Jesus Every Day (though I've no idea who coined it originally).

the corrupt national US media suppresses this sort of information

Vox, I look at Pope Francis' daily homilies, his Wednesday talks and other talks. He is orthodox and quite so and I would say conservative. It is the media that takes much of what he says out of context to make him into something he is not, and then hysterical Catholic bloggers take what the liberal media paints him as and smear him in a way that I fear will destroy the goodness in the reform in continuity people who actually could have a friend in Pope Francis if they weren't so paranoid and shrill about him.

Father, is it not the case that these daily homilies are not presented in writing in their entirety in English (or any other language)? That being the case, the vast majority of what the pope says is already being filtered before it even gets to the people for their individual consumption. Even this "homily" that you are talking about is not the actual homily itself -- this is a news story with the reporter's view of what the homily was about.

And that is a problem for everyone who wants to understand what the pope is saying. Neither people on the ultramontanist side nor people who you think are "anti-Francis" are able to deal with his actual words. We are all, though, able to see his actions very clearly. What most people are reacting to right now is the very idea of calling a synod on the family -- why are these things even being discussed?

The impression that I am given is that many bishops are looking for any way they can to get around listening to our Lord's very clear words. We are learning, also, that many of the bishops either lack proper theological training or simply do not possess the supernatural faith.

When a bishop suggests that we should look to the example of Moses as a guide for allowing divorce, there are only a couple conclusions that can be made about such a bishop: he's either an idiot or a heretic. Since I am generally not impressed with the philosophical and theological abilities of churchmen these days, I'll give him the benefit of the doubt and say that he's the former and not the latter. But, calling together a group of idiots, at the very least, demonstrate a staggering lack of prudential judgment.

Fr McDonald, even Cardinal Pell is questioning the make up of the 10 who will write the final synopsis. The position of Pope Francis then is very clear and cannot be said to be misinterpreted. If he doesn't want a liberal view conveyed from the synod why are the majority appointed to write the synopsis liberal in their views on Church doctrine? Can you answer that please?

The Gospel passage (Luke 11:14-28)on which the Pope preached was once familiar to congregations as the Gospel for the Third Sunday in Lent; they heard it every year. It is hardly surprising that those who compiled the new lectionary decided to relegate it to a weekday where few would hear it and then only biennially.

Bouyer remarks on the lectionary: 'there was too much haste to produce anything satisfactory' and it is well-known that Paul VI signed it off without reading it. It is frequently touted as being the jewel in the crown of the Novus Ordo but along with the rest of the 'reform' is more concerned with (usually flawed) theory than with pastoral practice. Why didn't they leave the Sunday lectionary alone and simply add more weekday readings, to cover the days outside of Lent, Passiontide, and the Octaves of Easter and Pentecost which lack their own epistles and gospels? And why suppress the Ember days altogether, with their rich selections of lessons?

One result of attending the EF most Sundays is that I have found less need to make excuses for the Novus Ordo. Bouyer writes: 'After all of this, it's not much surprise if, because of its unbelievable weaknesses, the pathetic creature we produced was to provoke laughter or indignation - so much so that it makes one forget any number of excellent elements it nevertheless contains, and that it would be a shame not to salvage (as so many scattered pearls) in the revision that will inevitably be called for.'

Some may feel that Fr Bouyer was being too generous to the Novus Ordo, 'l'avorton que nous produisîmes'.