REV. THOMAS REESE OF THE NATIONAL CHISMATIC REPORTER (NCR) NOT HAPPY WITH THE SYNOD AND THAT IS A GOOD THING: BE HAPPY; NOT SAD! 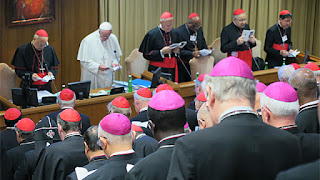 In a way typical of academic progressives, the only way to make their point to promote their ideology is to denigrate the academic and intellectual quality of their opponents. Thus Fr. Reese, SJ, continues that snarky tradition.

These are some excerpts of his commentary on the Synod from his newspaper, the National Chistmatic Reporter (NCR) which you can read in its entirety there.

The pope and the bishops argue that the synod is about the family and decry the media’s focus on homosexuality and divorce, but there is no question that these are the topics around which the bishops have conflict. There is little disagreement over other issues.

The problem is that conservatives do not see divorce and remarriage as simply one sin, which can be confessed and forgiven. They see it as a continuing sin each time the couple has sex. Since they will not stop having sex, they cannot go to Communion. There is no willingness to accept the first marriage as irrevocably broken and destroyed, which would allow the parties to move on with their lives.

One bishop spoke of a child who at his First Communion gave part of his host to his mother and father who were not allowed to go to Communion. Does this child understand something that the bishops do not?


But some bishops would like the church to stop using terms like “intrinsically disordered,” which is heard as demeaning by gays. Even language such as “hate the sin, love the sinner” is seen by some bishops as not helpful since sexuality is experienced as intrinsic to a person’s identity.
On the other hand, some bishops are obsessive in their opposition to homosexuality. Some still see it as a lifestyle choice. Dr. Anca-Maria Cernea, a lay auditor and head of the Association of Catholic Doctors in Romania, gave an impassioned speech at the synod linking homosexuality and Marxism while arguing that homosexuals can be cured.

The bishops are currently trapped in the old theology they learned in the seminary. They are afraid of new ideas and are not consulting with theological experts who could show them other options. As a result, it is unlikely that new pastoral approaches will be coming forth from this synod.

Some progressives still hope that Pope Francis can somehow magically pull victory from the jaws of defeat. I don’t think so. Pope Francis is conflicted. His pastoral instincts are leading him in one direction, but his respect for collegiality is stopping him from getting too far out in front of the bishops.

Never in my lifetime have I heard of bishops and cardinals being so disrespectful of a pope, challenging his organization of this synod, even a few referring to him as a Protestant and threatening a fractured church if he goes against their wishes.

The pope may have the support of the people, but could he win a vote of confidence from this synod?
Posted by Fr. Allan J. McDonald at Thursday, October 22, 2015