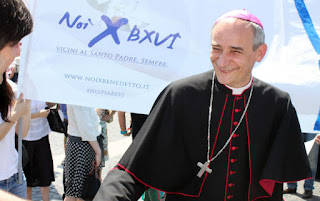 I would like to contrast two statements about the same new archbishop of Bologna, Italy, appointed by Pope Francis today:

This is from Rorate Caeli which is very traditionalists and weary of Pope Francis in general:

New Archbishop of Bologna a friend of the Traditional Mass

Pope Francis named today as new Archbishop of Bologna Matteo Zuppi, up to now Auxiliary Bishop of Rome. He has been mentioned here in Rorate for his visits to Santissima Trinita dei Pellegrini, the Personal Parish of the Traditional Mass in Rome (run by the Fraternity of St. Peter) - for instance, in 2014 - and his discreet attempts to help the Franciscans of the Immaculate.

May God keep him faithful, and may he be a worthy successor of the faithful Cardinal Caffarra in the defense of Christian morality.

This is from CRUX about the same newly appointed Archbishop:

Tuesday brought two more major steps in Italy for this “Pastoral Revolution,” as Francis tapped ideologically center-left clerics known for their social activism to head two of the country’s most important archdioceses in Bologna and Palermo...

From a political point of view, the transition in Bologna is especially striking.

There, Francis replaced Cardinal Carlo Caffarra, 77, a longtime champion of the Church’s conservative wing and a leading opponent of an opening for the divorced and remarried, with 60-year-old Matteo Maria Zuppi, well-known in the city of Rome as a fixture in the center-left Community of Sant’Egidio, known for its work in ecumenism, interfaith dialogue, and conflict resolution.

Zuppi sometimes has been dubbed the “Bergoglio of Italy,” a reference to the given name of Pope Francis.

For observers of Italian Catholic affairs, the move may be seen as tantamount to what happened in Chicago in September 2014, when Francis replaced the late Cardinal Francis George, who led the US bishops in their standoff with the Obama administration over contraception mandates, with the moderate Archbishop Blase Cupich.

Over the years, Zuppi has also been involved in some of Sant’Egidio’s best-known efforts at diplomatic troubleshooting, including playing a key role in negotiations that led to the end of a bloody civil war in Mozambique in 1992.

For his part in the peace talks, Zuppi was made an honorary citizen of Mozambique.

Zuppi also has organized a series of efforts in the city of Rome to provide care for the elderly, the poor, gypsies, and drug addicts, much of it centered in the Trastevere neighborhood where Sant’Egidio has its headquarters.

My Comment: In the name of God and all that is holy, is CRUX (John Allen) telling us that a traditionalist or at least an archbishop who is friendly towards those with EF sensibilities wouldn't provide care for the elderly, the poor, gypsies, and drug addicts??????

Most progressives are unbelievers, viewing the Church as merely a tool for social change. Those that like the EF do so for aesthetic reasons, not because they buy the theology behind it.

If Heresiarch Cupich is a moderate, I'd hate to see what "center left" looks like.

Also, these terms are ridiculous. There are Catholics and there are non-Catholics. It seems only the latter are eligible for the episcopacy these days.