WHILE JOHN ALLEN IS NO ENTRENCHED TRADITIONALIST; HE ISN'T A FLAMING PROGRESSIVE EITHER, SO HIS INSIGHTS ABOUT POPE FRANCIS ARE FAIR AND BALANCED! 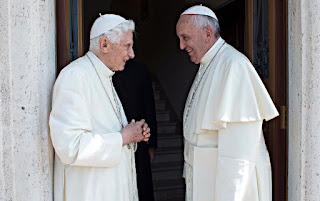 Seeing Pope Francis as shock therapy for the Catholic Church

You can read John Allen's full article at Crux. But here are some key excerpts:

For Catholics accustomed to traditional ways of doing things, Pope Francis is undeniably a shock to the system.

The raucous nature of the synod captures in miniature the spirit of Francis’ papacy. From the very beginning, he’s been a break-the-mold kind of pope.

Americans got a reminder of that during his recent visit when he defied conventional left/right divisions by meeting Kim Davis, the face of opposition to gay marriage in the United States, as well as a longtime friend from Argentina who is in an openly gay relationship.

It was vintage Francis. He exudes a talk-to-everyone ethos, emphasizing that Catholicism needs to get out into the street, even at the risk of getting dirty, in order to make itself relevant. That approach has given Francis enormous popularity inside and outside the Church — including, despite what one might think from some media coverage, generally strong support among the world’s bishops and inside the Vatican itself.

For some in that group, Francis represents a break with Popes John Paul II and Benedict XVI. They charge that Francis has exacerbated the Church’s internal divisions, with some even floating the prospect of a “schism,” meaning a formal splintering into rival camps.

Francis is not the repudiation of Benedict XVI, but the “radicalization” of his predecessor’s legacy.

Benedict, he says, understood that a growing rupture between faith and culture has left Catholicism in a deep crisis, and he laid an intellectual basis for rethinking how the Church can engage a post-modern secular age.

Francis, as he sees it, is now jolting the Church out of long-established patterns to allow the rethinking Benedict wanted to occur — not at the price of diluting the Church’s teaching, but in order to revive its capacity to win hearts and to shape history.

In other words, Francis is basically shock therapy for the Church.

Such therapy is notoriously painful and unsettling, often causing patients to experience confusion and disorientation — both of which are palpably present in some circles of Catholicism these days. Yet there are times when it’s the only way to jolt the patient out of a funk.

Psychiatrists will tell you that shock therapy should be used only as a last resort, and it doesn’t always work. It’s effective only about half the time, and even when it does succeed, its effects often wear off over time.

Viewing Pope Francis this way, however, might at least have the side-effect of reassuring anxious elements of his base that he’s not out to harm Church teaching and tradition. He’s actually trying to save it.


My Comments: I think this all ties into the stealthy Pope Francis which I believe is true. I will eat my biretta if Pope Francis in his exhortation on the Synod on the Family (which will be the only authoritative document that we must acknowledge as authoritative!) if he allows Holy Communion to those living formally in adultery without the codicil that they abstain from the "marital act" since they aren't married in the eyes of God. He will make clear what is already true, that if someone in an immoral adulterous relationship is near death or facing a possible death, they may be readmitted to the Sacraments of Confession and Holy Communion by way of the Last Rights (Anointing of the Sick).

The same will apply to those who are gay. If they are trying to live a chaste life the Holy Father will offer them great encouragement and ask the world to love those who struggle with their sexuality which includes others who are not gay but struggle with various sexual "philias" that are unnatural also, most of which are experienced by heterosexuals by the way.

I think I get the basic argument but the execution of the strategy has been ham handed. The liberals love Francis because they think he's OK with their moral status quo. Being told you are OK to be gay (i.e. sexually active) is music to their ears. Oh sure, they'll vote for Francis in opinion polls.

But will they go to Mass? If they go, why won't they go to communion without first confessing their sins since they heard the Pope tell them they have no sins? So will their involvement in the Church help their souls on this trajectory?

Smug liberals who spent 40 years dissenting on Humane Vitae are likewise living immoral lives but now get to feel even more smug - the Pope has told them they're Christ-like and their hated arch-enemies the conservatives are the real Pharisees.

So everyone who ought to examine their conscience and consider reform for love of Christ is told that Christ doesn't care about sin just their presence.... but he does terribly care about the sins of the hated conservatives so, boo, hiss, yes, indulge in murderous thoughts their direction because: pharisees.

So how do these groups - the sexual libertines and the secular socialists become better disciples of Jesus Christ thanks to this strategy? On what grounds would they need to confront their complicity in sin and seek God's pardon and the on-going support from heaven to conquer the threat of the world, flesh, and devil?

What's the point of winning social points with these people if their involvement isn't going to move the meter on their personal approach to holiness? If they think they can be 'good Catholics' but vote like Nancy Pelosi or 'good Catholics' but live like the hedonists they are?

Without humility (and shame) can a soul be saved? But where would some libertine or lush, some liberal or socialist be struck by a need for humility and shame in their own lives from Pope Francis' strategy?

The end doesn't justify and doesn't even explain every means we might concoct.

Culture is driven by what people worship. If people worship idols or themselves the last thing you do is reinforce their believe that the idols are honorable and themselves are great 'just the way you are'. No, our ancestors had tried and true ways to deal with idols and egotism. It involves smashing the idols and performing miracles of healing, exorcism, and ministry. But that requires true faith without fear of what the cool kids might say.

But here's the thing. the cool kids are going to hell unless someone tell them what they don't want to hear.

Then the Pope should tell all of these bishops, cardinals and other who keep talking about "gay" issues to put a sock in it. It is off the table, stop distressing the faithful.

I will gladly do public penance when proved wrong about him.

Trying to save it? Save it from what? You mean the truth and future of the Catholic faith stands or falls on the actions of a pope? That if he doesn't take radical action, God will go extinct?

Hmm. You say John Allen "isn't a flaming progressive", yet I've just had 2 comments deleted from his site because I stated that (i) transexualism is a disorder and (ii) homosexuality is a disorder. The first is admitted by transsexual themselves, inasmuch as they seek hormonal and surgical therapy, while the second corresponds pretty closely to teaching of Benedict XVI.

There's something very troubling about "liberal" blogs like Crux and Pray Tell and their heavy-handed censorship. Kind of reminds me of a synod I know....

Crux is owned by the Boston Globe once owned by the NYTs. Pray tell is just silly. But it is the progressives who should hate censorship who are the most vicious about doing it. John Stossell's Censorship in America on Fox was scary and it is the liberals who are the Nazis!

Pro-homosexual propaganda is being distributed at the synod. Who do you suppose is allowing this

I see that a group of conservative Cardinals have written a letter to Pope Francis warning him that his "synod" is about to go of the rails. The article points out that Francis is "strongly supported" but the liberal Cardinals, who want to change Church teaching.
It will be interesting to see which way the synod chooses to double-talk this. Whatever comes from it, you can be sure that it will be vague and open to whatever interpretation you'd like to give it.

Talking of censorship, the following Psalms were expurgated from the Divine Office: 57, 82 and 108. 62, 109 and 136 were censored by removing certain verses. This was despite the fact that in November 1962 the Council Fathers were overwhelmingly in favour of retaining the Psalter in its entirety.

One of the banned Psalms (108) has the following verse. 'Fiant dies ejus pauci, et episcopatum ejus accipiat alter.' (May his days be few, and his bishopric let another take.)

Nominations, anyone? No exceptions, not even the Bishop of Rome.

Just now news that someone has declared that the classic distinction between sin and sinner can't be sustained *(because, see, gays can't distinguish their very human dignity with the act of sodomy, so assume no one else can, and thus their impairment is to be universalized).

So a gay dude wants to commit sodomy. He feels incapable of saying 'no' to the urge. Now, we know he can and did control that urge when "in the closet" just fine. But see, he didn't FEEL GOOD about discipline and control. And as we all know, the Lord died on the cross so we could FEEL GOOD about our smug selves, right? amiright?

Straight brother tries telling dude that the act is distinct from the person being tempted. That there is a distinction between what we do with our bodies and our dignity as human persons - else, there'd be no distinction between rapist and rapee. But the darkness of the intellect is such that they can't see it. The stunningly obvious distinction we all make a thousand times when dealing with every OTHER issue on earth....is suddenly too complex when sex is involved?