INTERFAITH SENSITIVITY IN THE 1950'S 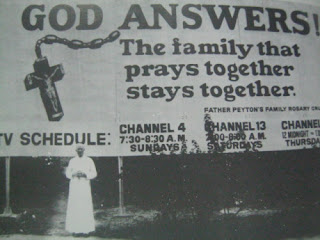 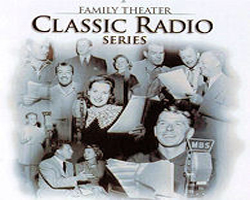 On the Mutual Broadcasting Network, one of the largest radio networks in the last century, there was a 1950's radio show called "The Family Theater." It is played now on XM Radio Classics and I just heard an episode. The shows themselves are well produced and acted, but are not overtly religious although the themes are family oriented.

Wikipedia tells us that  the show was produced by Family Theater Productions, a film and radio studio extension of the Family Rosary Crusade founded by the Holy Cross Priest, Father Patrick Peyton, CSC, as a way to promote family prayer. The motto of Holy Cross Family Ministries is "The family that prays together, stays together."

A total of 540 episodes were produced. The program featured not only religious stories but half-hour adaptations of literary works such as A Tale of Two Cities, Moby-Dick and Don Quixote.

You can listen to  examples of the show (not the one I listened to this morning) by pressing HERE.

The show I listened to was hosted by Gayle Storm, a famous 1950's television actress who starred in My Little Margie and then later The Gayle Storm Show which had a nautical theme. In the 1950's I was in love with her, but never mind.

But after today's episode, Gayle Storm gave a lovely talk about the dangers to health and family and said that prayer was the only solution, family prayer as a bulwark against the enemies of the family. I can't quote her verbatim but she said the great power of prayer keeps families together.

The show's primary mover and shaker was Father Patrick Peyton, the great radio and Rosary priest. And all the shows promoted his powerful slogan, "The family that prays together stays together!"

This show reminded me how religious America was in the 1950's and how religion was riding high in secular culture and media. Is it wrong to be nostalgic for these days and pray that they return?

The point, though, is that the prayer and little sermon by Gayle Storm were very ecumenical and interfaith oriented. It didn't promote a particular religion but promoted prayer in a generic way.  I think the 1950's openness to this kind of programming and the Judaeo-Christian values implicit in most radio and television shows of that period makes the 1950's one of the greatest periods in history.

All the shows from 1947->1957 may be listend to or downloaded from here for free (public domain):

I listen to OTR shows (Old Time Radio) when I have time, especially detective mysteries, by putting the .mp3 audio files on my Android smartphone and use earphones.