A SANE VOICE ACROSS THE POND TELLS THE TRUTH: THE ORTHODOX PREVAILED DESPITE THE SPINNING THAT IS GOING ABOUT THIS, THAT OR THE OTHER 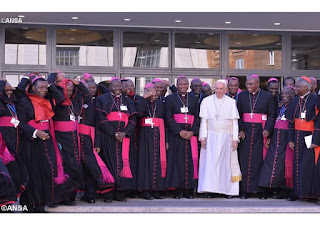 This afternoon the Vatican Synod on the Family amended and approved the final document summing up three weeks of chaotic and sometimes poisonous debate – much of it focussing on whether divorced and remarried people should be allowed to receive communion.

The majority view of the Synod Fathers is that they don’t want the rules changed. They especially don’t want one rule to apply in, say, Germany and another in Tanzania. Pope Francis has just given a cautiously worded (but also, alas, rather waffly) address in which he acknowledges as much:

Significantly, the Fathers didn’t back a ‘solution’ suggested by liberal cardinals, whereby divorced and remarried Catholics could consult their consciences and their confessors over whether they should follow the rules.

This was the liberal Plan B, hastily put together after it became clear at the beginning of the Synod that there was no chance that Cardinal Walter Kasper’s radical plan to scrap the communion ban would be voted through.

Please don’t ask me to explain Plan B in detail. Liberal journalists got very excited about this supposed ‘breakthrough’, associated with the German-speaking cardinals Marx and Schönborn, plus Archbishop Cupich of Chicago. But they didn’t manage to tell us how it would work in practice, given that the Synod Fathers are sticking by St John Paul II’s ruling that divorced and civilly remarried Catholics can’t receive the sacrament and that’s that.

The final report of the Synod encourages pastors to ‘accompany’ divorced and remarried Catholics as they ‘discern’ their culpability – on a case-by-case basis, as not every divorced Catholic is equally guilty (very true, but a point already made by St John Paul). However, there’s no mention of readmitting them to communion. If I were a Catholic in this situation, I wouldn’t read the report as giving me any sort of permission to receive the sacrament, though I might – with a leap of the imagination assisted by liberal Catholic journalists – recognise the tiniest of steps in that direction.

As for homosexuality – no change at all. How could there be, when the most powerful African bishop, Cardinal Robert Sarah, described gay rights and ISIS as twin evils threatening Christendom? (I’m sick of pointing this out, but opposing homophobia in the Church is not high on Pope Francis’s agenda. Fighting gay marriage is.)

I’m going to stick my neck out and say that conservatives basically ‘won’ this synod – they fought successfully behind the scenes and in the debates to block changes to pastoral practice that (a) they believe go against the teaching of the very anti-divorce Jesus of Nazareth and (b) would have outraged the increasingly powerful churches of Africa.

The key moment was the revelation that 13 senior cardinals had written to Pope Francis telling him, in diplomatic language, that any softening on divorce and homosexuality would divide the Church along Protestant lines. Fr Raymond de Souza, writing in the Catholic Herald, has a theory about the importance of that letter in this fascinating post. He also has a stab at explaining the liberal’s Plan B (or maybe it was Plan C, since there seem to have been three pro-Kasper positions).

But the conservatives won’t regard this as a famous victory, and the liberals won’t despair. That’s because Francis, so far as we can tell, supports some form of pastoral change and he is, after all, the Pope.

He may choose to overrule the synod, or turn a blind eye to bishops bending the rules – which would be very dangerous for him, given the conservatism of the report published today. Then again, he lives dangerously.

But, whatever happens, this synod and the preparatory one that fell to pieces last year, will overshadow his pontificate. The naive hopes of divorced and gay Catholics have been raised and dashed. Clergy and active lay people are more divided today that at any time since the aftermath of the Vatican Council 50 years ago. Maybe the next pope will be able to heal these wounds; probably not.

From what I have read, in his final address to the synod Pope Francis criticised some bishops for being closed minded and having their heads in the sand. So bishops are criticised for what? For being Catholic? I find these statements incredible that they come from the mouth of a pope of the Catholic Church. No ambiguity there and no being taken out of context either. Sour words perhaps from a pope put into a situation that any liberalisation will have to come from him. Where to now for Pope Francis?

Jan
I like you, was taken aback by the Pope's comments. I would hope that he would at the very least phrase these comments more charitably. Is there any evidence that the bishops he is criticizing do not love God and His Holy Church? That they are not concerned about the salvation of those in their care ? It seems that they want God's laws obeyed, which is not just out of respect we owe to Him, but for our own good.

Blessed Jacinto Marto (she was just a child by the way) on one of the things Our Lady said to her:

"Men are lost because they don't think of the death of Our Lord and don't do penance."

Today, we might add that thay don't repent and confess of their sins.

Our Lady also told her:

"Pray much for priests"

Yes, George, I think we have to now firmly put Pope Francis in the liberal camp because he seems to be of the same mindset as Cardinal Kasper and others. None of the Popes in my lifetime have made these sorts of statements. Fr Ray Blake reports that morale in Rome amongst the priests is said to be low and he thinks it is a result of the daily sermons emanating from Pope Francis. The problem is that the Pope is not embracing all within the Church, which is his job like the Popes before him. If you promote mercy then it has to be mercy to all otherwise the words are meaningless and empty. Personally, that's how I feel with this papacy ... empty. If I didn't realise that God is in charge and that the Church is greater than the Pope then I too would feel demoralised. If the leadership from the top of any company isn't positive and uplifting then the company starts to sink ... and the chairman is responsible for that. I never thought I'd say it but in the presence climate thank God for collegiality.