WAS POPE FRANCIS' USA TRIP HIS PALM SUNDAY LEADING HIM TO A QUICK GOOD FRIDAY? 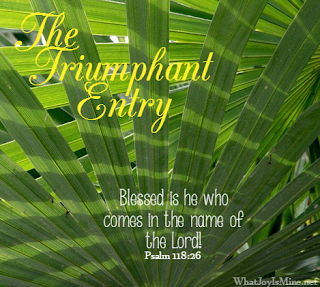 Last week at a daily Mass, shortly after Pope Francis' triumphant welcome and departure in the USA, I reminded everyone of Jesus' triumphal entry into Jerusalem on Palm Sunday only to have the tide of public opinion change rather quickly leading to Holy Thursday and Good Friday's passion and death.

Is it possible that Pope Francis, the successor to St. Peter is heading to His Holiness' Good Friday?

Keep in mind that those who turned on Jesus were those who despised Him in the first place; they never accepted Him as Messiah and He was a political threat to the powers that be, the Roman Empire in the region.

But those who were close to Him were turned off also. Think Judas. What happened to him that he became so disillusioned with Jesus to the point of helping to be the hit man?  Then even Peter denies Jesus' three times.

Pope Francis is becoming an equal opportunity victim of both the left and the right. The right has never liked His Holiness since day one. The left thought they had an ally in His Holiness.

Now, though, the left seems to be waking up to the fact that Pope Francis is Catholic. The only thing liberal about His Holiness is that His Holiness loves people and wants to find ways to lead them away from sin and sinful lifestyle to the Sacrament of Mercy, Confession which always requires a firm intention to make amendment and sin no more.

The article from the New York Times which I copy from the Deacon's Bench seems to confirm why liberals are now turning on Pope Francis. In a way it is similar to the Daily Kos article I published on another post where liberals are now realizing that the Pope is Catholic as it regards the culture wars, i.e. same sex marriage and religious liberty associated with conscientious objection.

And then below the Times' article I publish what Pope Francis said about the "stupid leftists" in Chile who are trying to oust a bishop that Pope Francis appointed several months ago who was heckled out of his cathedral during his installation because this bishop is associated with a priest in a sex abuse scandal.


NY Times: “Has the cool pope left the building?”

October 4, 2015 by Deacon Greg Kandra
That’s the eye-catching question posed at the beginning of this op-ed piece by Peter Manseau in The New York Times.  The key to understanding the pontiff, he explains, is his consistency:


No matter if in his meeting with Kim Davis we cast Pope Francis as a bumbling victim of his own lieutenants, or a back-room wheeler-dealer unwilling to come clean, in his past complaints about judges meddling in matters constitutional and divine, he already lent support to Ms. Davis’s cause no less than her loudest defender, Mike Huckabee, the former governor of Arkansas and a Republican presidential candidate, who put the same idea this way: “Constitutionally, the courts cannot make a law.”

It is tempting to see in the pope’s varied messages during his first visit to the United States the ploys of a seasoned political fighter who knows that a move left on the climate and the economy gives him the space he needs to jab right on social issues. That may be part of it. As the future pope counseled, one should not be naïve. The Vatican was an old hand at international politics before this country was born.

Yet another interpretation is far more unsettling to our bifurcated culture: that Pope Francis is a man who sees more similarities than differences between Kim Davis and Dorothy Day.

During her protests against the war in Vietnam, Day, too, broke the law, and spoke openly about the need to do so. She professed her willingness to go to prison for her convictions, just as Mr. Huckabee did the day Ms. Davis was released from jail. While Day took action because of war and Ms. Davis did so because of marriage, in the pope’s view, his church’s struggle against same-sex marriage is “God’s war.”

Francis has said he sees the devil at work in the question of marriage equality; Ms. Davis has said her refusal to grant marriage licenses was “a heaven or hell decision.” Whatever sets them apart, what the pope and the county clerk ultimately have in common is more than a few moments together in Washington.

As his papacy continues, Francis will likely infuriate people on both sides of our political divide, but it won’t be because he’s fickle. Cool or uncool, the pope is consistency itself.

And this from CRUX:

ROME — A five-month-old video released Friday shows Pope Francis accusing critics in Chile of “foolishness” for protesting his appointment of a bishop accused of covering up for the country’s most notorious abuser priest.

The video shows Jaime Coiro, a former spokesman for the Chilean Bishops Conference and its current assistant secretary, in St. Peter’s Square, where he greets Francis personally and tells him that the Chilean church is “praying and suffering for you.”

With no prompting, Francis tells Coiro that the local Church in Chile has “lost its head,” allowing a group of politicians to judge a bishop “with no proof whatsoever.”

“Think with the head, don’t be led around by the nose by these leftists who are the ones who put this [opposition] together,” the pope is heard saying.

The “leftists” to whom Francis referred are presumably 51 members of Chile’s Congress, most from the Socialist government of President Michelle Bachelet, who signed a petition opposing Barro’s nomination.
Posted by Fr. Allan J. McDonald at Monday, October 05, 2015

If the pope upholds the teachings of the Church concerning marriage and the objective evil of sexual acts outside of marriage then he will be hated by some of the press. The majority will ignore what he says and state that he really wants to change Church teaching but mean, evil, horrible, nasty, conservatives stopped him.

If the pope in any way compromises the teachings of the Church concerning marriage, sexuality, the Eucharist, penance, then he will be the cause of schism.

And all of this is of his making.

The teachings of the Church is clear. The problem is that many in the hierarchy and the clergy and religious life either do not believe in the Faith or ignore it. That is what a synod needs to be called to address.....the filth that has internally infected the Church and has caused an entire generation of souls to loose the faith.

Thank you for sharing reflections such as these. With so much confusion and mixed emotions right now, it's good to have your blog providing reason, balance and hope. While Fr. Z posts about pastrami and his frequent trips around the globe, you keep us open to dialogue on the important developments in Our Lord's Holy Church. That's why this is now the best English-language Catholic blog. Thank you.

Thank you D! I blush! I am just a dumb parish pastor though!

Pope Francis' fidelity seems to be to God . . . to do God's holy will.

Let us say that Frances is an utterly orthodox Catholic. Yet he constantly misspeaks and even acts in ways that for some reason (e.g., his personality, the contexts in which he speaks/acts, or the sheer number of times he misspeaks/acts, or the substance of his words and actions) give the media, the world, and the modernists considerably more reason to doubt his orthodoxy than was the case with JPII or Benedict.

OK, given these premises, can it be reasonably argued that whatever his orthodoxy, Francis is undermining the Faith by misrepresenting it (unwittingly, given the above)? He suggests to non-Catholics that Cathlicism is something it isn't, and so persuades them that the Church--and even to become Catholic--would be more acceptable than they heretofore thought, which--if the doctrines of the Faith can't change--inevitably lead the world to believe that--at best--the Church, or Francis himself, has pulled a bait-and-switch. End result: people either join the Church under false pretenses, thinking they're getting something they aren't, or visible, public hatred of the Church increases, or both.

Pope Francis is often misunderstood because of his Pyrrhonist philosophical tendencies. It is typical of liberals of any color and hue.

This is something I rather think about constantly. It is one thing to meet people where they are, and speak on their terms. (Which I don't necessarily agree with, I do not believe in treating people as idiots, I believe in helping them to elevate their language to assist their understanding)...It is another thing to mis-represent what one believes, or be interpreted as such. (It seems when Pope Francis is speaking to non-Catholics, he's using rather anthroprocentric terms)

People should not join the Church because of a Pope, or individual, but rather because She is True (though people can most certainly be agents in this process)....And most certainly shouldn't join under false pretenses.

Those that think Pope Francis is going to change the teachings of the Church would have a better chance of me admitting turkey bacon is real bacon. Of course since the latter is never true under any circumstances, Pope Francis can't change Church teaching.

But this may well be his defining moment.

Yes Jenny, his issue is he loves the Traditional Latin Mass!!! Wish this Pope did!!

A pope must strengthen the saved, but he must go first to the lost sheep, many of whom are now standing perilously on a cliff. We should stop complaining and instead help him gently rescue those sheep. Christ's grace is sufficient for us, so let us join the Holy Father's stealthy efforts to save those who have no grace.

At the risk of sounding too much like Pater Ignotus, I would just note that there is only one Mass: the Holy Sacrifice of the Cross. Certain rites, and certain forms, of the Sacrifice help certain people participate in it more fully, and so each rite or form should be respected. But each rite/form of Mass is still a celebration of the same Sacrifice. That's what matters.