Popes, Cardinals and bishops have an obligation to be crystal clear and promote the unity of the Church based upon her crystal clear teachings. When they muddy these teachings in any way, they will be held accountable by God!

Cardinal Arinze makes clear that popes can't change what is revealed truth. In fact we know that popes and bishops cannot act as absolute monarchs or dictators. They are bound by the infallible teachings of the Church even in pastoral practice. Pope Saint John Paul II made this explicit when he stated he had absolutely no authority, even if he wanted to do it, to ordain women into Holy Orders. He was not an absolute monarch or despot. Papal powers are limited and this is indeed infallible also!


A synod conversation with Catholic Africa’s lion in winter 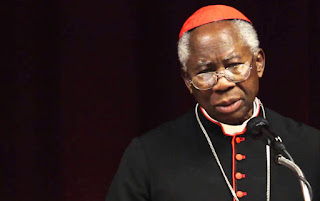 Crux: What would Africans like to see from this synod?

Arinze: I think they would like the synod to speak with a clear voice that marriage comes from God, as a union between a man and a woman. God created one Adam, one Eve. When Christ came, he blessed that unity of marriage. He went to the marriage feast in Cana, and he did his first recorded miracle, changing water into wine, which means that he approved! Marriage comes from God, not from human beings, so human beings cannot reinvent or redefine it.

You are convinced it’s not possible to invite divorced and civilly remarried Catholics to Communion?
That is correct, in the sense that Christ has said, “What God has joined, let no man put asunder,” and the Catholic Church traditionally has interpreted it to mean that a consummated marriage sanctified by the sacrament cannot be broken by any authority.

Including the authority of the Church?
Yes, not even the authority of the Church can break it. That being so, if a man leaves a woman or asks her to go away, or she does the same, and they get a fresh partner, that can’t be approved. Christ has one word for a person who does that: “Adultery.” We cannot improve on what Christ has said. We cannot be wiser than him, or say that “there is a circumstance he did not foresee.” We cannot be more merciful than Christ.

We must look for a way to help the divorced who are remarried, [but] we don’t help them by saying, “Come and receive Holy Communion.”

The Eucharist is not something we possess, and we can give to our friends and those with whom we sympathize …. The idea of sin is not something new invented by modern conservative people in the Church. It is Christ himself who called it a sin, and he used that word “adultery.” He knows what he’s talking about. Without departing from Christ, how can we backpedal?

Remember, only God will conduct the last judgment, not us, not even half a dozen cardinals from the Vatican. God will judge each person’s circumstances, but objectively we cannot approve [divorce and remarriage].

Some African bishops have said that if the Church makes a change on Communion for the divorced and remarried, some people living in polygamous relationships might ask why that can’t be done for them, too. Is that a concern you would share?
Yes. It’s not a bad argument, because the polygamous could say, “Look, my own situation is better than that of these other fellows who threw out their first wife and got another one. I didn’t throw out the first one, she remains, and I only took on a second one. God even tolerated polygamy in the Old Testament!”

We have to look for another way to ensure compassion for those who are in difficulty. You don’t solve a headache by cutting off the head!

There has been conversation in the synod about a finding a “new language,” especially on homosexuality, meaning something that’s more inclusive and welcoming. How does that look from the African perspective?
I would be suspicious, because I would wonder what type of new language you want. Shouldn’t we call things by their name, calling good “good” and evil “evil”? We don’t condemn the person, but we don’t approve the action.

One of the duties of bishops is to teach, and it is very important that the Gospel be undiluted, without adding salt or pepper, but without subtracting them, either. The message is not ours. Christ’s message must shine clearly on what marriage is. If two men come together for business purposes, we’re not worried about that. But if they begin to call it marriage, don’t you see that it’s not all right anymore?

Some at the synod have talked about allowing decisions on the divorced and remarried or on homosexuality to be decentralized, made at the level of regional or national bishops’ conferences or by individual bishops. How do you feel about that?
Are you going to tell me that we can have a national bishops’ conference in one country that would approve something which, in another conference, would be seen as sin? Is sin going to change according to national borders? We’d become national churches. Have there not been other religious affiliations in the world that came dangerously near to that?
National bishops’ conferences are important and should have a clear role, but I don’t think it should include these areas. It looks dangerously like nationalizing right and wrong.

There’s been talk at the synod about what Pope Francis has labeled “ideological colonization.” What does it mean in the African context?
Africans would think immediately of the big countries that have more money, more economic weight, pushing the so-called “Third World”, or developing countries — although every country is developing somehow — to adopt abortion and contraception, but they don’t use those terms, they call it “family planning.” They’ll say you must have it in your government plan, otherwise you have too many people and that’s why you’re not developed. You should reduce your population, and they make it a condition for receiving international financial help.

To take another example, some African governments have assigned prison terms for homosexuality. It’s not that I support those measures, but for the richer countries to say that if you don’t change those laws you’re against human rights and therefore we’ll see that you don’t get financing, this also becomes ideological colonization.

The richer countries may have more money, but they shouldn’t turn themselves into professors of moral theology just because other countries are poor. When I was archbishop, I said to one big agency that came to Nigeria to help us, “We have a minimum dignity below which we’re not prepared to descend for the sake of your money. Don’t go below that!”

Many observers speak about an “African moment” in Catholicism. What does Africa have to give to the Church that it needs right now?
Without boasting or pretending that Africa has a monopoly on good things, there are some things we can bring. [For instance], Africans can share the joy of being a Christian. Christianity is good news in Africa. Young people commit themselves with serious sacrifice to Christianity.

When I was archbishop, I began a monastery of enclosed Benedictine nuns in 1978, the year of three popes. An Italian convent sent four nuns, three Italians and one Nigerian, to get it started. Now there are 120 nuns there. They’ve founded another monastery in Nigeria with 50 nuns, and they’ve taken over one in Italy where there are 10 nuns, all Nigerians. The Italians have died out, only the Nigerians remain. They have sent their nuns to some other convents in Italy and Spain, quietly, without any noise.

Young people are ready to offer themselves. They are responding. Young people are not allergic to sacrifice, and Africans can share that. Africans are sharing in the mission of the Church.
Posted by Fr. Allan J. McDonald at Friday, October 16, 2015

Correction, Father. Only LIBERAL Popes can act as dictators or absolute monarchs. However, if the Pope upholds traditional teaching, the liberals will screech that the Pope is being dictatorial. Ironic, or simply par for the course. A good priest friend of mine once said, "there is no one, more -ill-liberal than a liberal."

It's becoming shocking to hear a cardinal proclaiming the Gospel with simple clarity.