PASTORAL SOLUTIONS IS AN ART NOT A SCIENCE: ONE VIEW ON THE INTERNAL FORUM 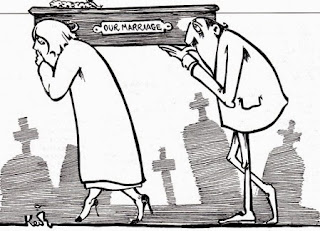 The Dilemma of Divorced Catholics

WHAT IS THE INTERNAL FORUM?

Occasionally petitioners are afraid of dredging up the history of their failed marriage. Some fear that their former spouse might do them harm. Whatever the reason they cannot bring themselves to proceed with a formal case.

Then there are those cases where because of some error in judgment made by a priest or a tribunal official justice was not rendered. Justice delayed is justice denied.

If a person believes his or her prior marriage is invalid, but cannot prove it they should seek counsel. Many Catholics have divorced and later remarried before a Justice of the Peace without having consulted anyone, and without having obtained a Church annulment.

This is a violation of Canon law, and they are presumed to be living in sin. Suppose however that the legal presumption of the validity of the first was incorrect. Suppose there was a defective intention which could not be proved.

Rare though it may be, such a thing can happen. Following one's conscience may be justified in some circumstances. Every marriage is different. It is impossible to judge me state of another person's soul based on the known facts of a case. Sometimes things are not as they appear. Sometimes the so-called sinners are saints and the upstanding saints turn out to be sinners.

Someone who wakes up from the nightmare of a disastrous marriage in a state of disorientation may not understand the laws of the Church. The victim of abuse and violence seldom has the objectivity of a trained professional. It takes a long time to recover from a nightmare.

If such a person begins to heal, and for the first time finds true love, it is not difficult to see how the new relationship can be perceived to be a gift from God. The couple begins living together, feeling absolutely clean before God. They try for an annulment but are told they have no case or they cannot prove their allegations. What are they to do?

Pope John Paul II in his Apostolic Exhortation, Familiaris Consortio, has forbidden couples from receiving the Eucharist if they are not validly married. Many of them receive anyway believing that their second marriage is not a sin but a blessing.

Such a reception of Holy Communion violates the letter of the law, but freedom of conscience comes into play here. The natural law right to marry must be weighed against the doubt about the validity of the first marriage. Very few priests would turn anyone away from receiving the Eucharist. The burden is on the person receiving to do what they think is the right thing.

What about the Magisterium?

Isn't a Catholic is bound to form his or her conscience according to the teaching of the Church's highest teaching authority? Yes, but what exactly does that mean?

In other words there are times when an informed conscience is not a conformed conscience. The Church urges us to obey and conform, but this is not always possible. The lawmaker cannot envision every set of circumstances when writing a law. Some people fall through the cracks and the internal forum is a safety net for them.

The Church upholds freedom of conscience to the extent that even if a person is in error, he or she must obey their conscience. Outsiders should respect the sincere and well-formed conscience of another person even if they disagree with it.

In my book"Where Do You Stand With The Church The Dilemma of Divorced Catholics," (Alba House, NY, 1996) I go into all these questions in greater detail.

I hope this brief outline is of help to you as you try to understand the Church's discipline on marriage. The internal forum is not a license to do as you will, it is a sacred faculty to help you discern the truth as you stand before God.

One day we will all be judged on the way we have loved one another. This essential truth of the Gospel must be weighed carefully in all the decisions we make in life. I wish you well in all that you do and I pray that God will bless you always.
Posted by Fr. Allan J. McDonald at Saturday, October 24, 2015

Unfortunately Father, it is the "spirit of Vatican II" all over again.

Look at what James Martin, S.J. has put out on Facebook to rave reviews. It is all conscience. Come one, come all.

Breaking: The Synod on the Family has concluded. The final document has been released and, among its recommendations, for divorced and remarried Catholics it encourages the use of the "internal forum," a practice where a Catholic consults with a priest, discerns and reflects on his or her situation and then, using his or her conscience as a guide, decides whether to receive Communion. The encouragement of this is a major step and a significant softening of the church's approach to divorced and remarried Catholics.
It also repeats, essentially Catholic teaching on respecting LGBT people, but does so in a more welcoming tone, and asks Catholics to have a special care for families with LGBT members. (It, not surprisingly, opposes gay marriage.) Here is one quote (my translation from the Italian):
"The Church conforms its attitude to that of the Lord Jesus: that love without boundaries is offered to every person without exception...In respect to families living the experience of having within them people with homosexual orientation, the Church reaffirms that every person, regardless of their sexual orientation, must be respected in dignity and met with respect, taking care to avoid "every sign of unjust discrimination"...We reserve a specific attention to the accompaniment of families in which people with homosexual orientation live."
The Italian text is here: http://press.vatican.va/…/pubbli…/2015/10/24/0816/01825.html
Also the Pope in his final address, in English here, reminded us that "True defenders of doctrine are not those who uphold its letter, but its spirit; not ideas but people; not formulae but the gratuitousness of God’s love and forgiveness."

All vague double talk. So, conscience trumps the Ten Commandments. "I am the Master of my fate; I am the Captain of my soul."

Oh, and there is that phrase "unjust discrimination" which essentially means let them do whatever they please because they are a privileged class. We are so screwed...literally and figuratively.

This is legalistic, moralizing nonsense.

“So, conscience trumps the Ten Commandments.”

I suspect this may be the wrong way to look at the internal forum. It is not so much that conscience trumps the Ten Commandments as, in this case, helping to determine whether one of them has been broken.

"Even if a person is in error he must obey his conscience ".....ummm no I don't think so your eminence...if my conscience is confused or leading me astray I personally would appreciate it if someone, esp if they are wearing a priest ' s collar, cared enough about my soul to help me find the Truth.

Letting me fall of a cliff under the guise of respect for my confusion or insufficient knowledge is NOT showing me
Love.

I am increasingly of the belief that these particular priests, bishops...the pope included get Our Lord confused with the Lord that they have fashioned after themselves.

What everyone is forgetting is accountability. We have to live with our decisions be they right or wrong. A person who follows an malformed conscience and decides to go to Holy Communion will answer for it before God. That should cause some sobriety in that person.

But what about all those whose interior dispositions we do not know, the person who presents himself for Holy Communion every time he goes to Mass which is infrequently and has no real relationship with God or the Church and actually doesn't really believe in the real presence as the Church teaches it. To be honest with you I don't obsess over it--I entrust everyone, including myself, to God mercy and judgement.

Clergy and laity are not liturgical police men. Excommunication that is public is very rare. How many women who have had abortions and yet never go to confession continue to go the Holy Communion?

And yes, I know of many women who over the years have made sacrilegious Communions while in a state of private excommunication (and men too for that matter) who have had abortions or assisted in it. Maybe the Lord in his displeasure has motivated them even through their sacrilegious Communions to eventually go to Confession and repent?

How many here think that this is impossible because they are so in tune with the letter of the law and not its spirit, to act as armed guards as though Christ can't take care of Himself when someone makes a Holy Communion in a state of unworthiness?

To be sure, I am not advocating that people make sacrilegious Holy Communions but only stating the obvious that they do. God will deal with it in His own way and sometimes in ways we do not expect!For my part, I'll let God be God in this and I'll refrain from the root of Original Sin, trying to play God and think I know better.

You know, saying "I'll let God deal with it," reminds me of what all the Baptists say when they don't want to deal with something or when they need a show of faux humility, "I'm just gonna' let the lord lead." I think this is a denial of Christian responsibility to "fight the good fight." Does not God expect us to defend the faith and the Church? Is not righteous outrage a legitimate response to such things as are going on with the Pope and this ridiculous synod? It is not a question of "Christ can take care of himself( a Luther statement, btw)," but of how obedient we are to His commands.

Gene, the teachings of the Church are out in the open and consolidated in a readable form in the Catechism. I cannot control what people choose to believe or not. In fact our Holy Faith isn't about control at all. Controlling people might think it is, but they are wrong. Of course I can't control that either can I?

I really do not think the issue is "controlling people."