WHILE THEY ARE FIDDLING IN ROME AS THE CHURCH BURNS, MORE FUEL IS ADDED TO THE FIRE EACH DAY AND NO FIRE DEPARTMENT IS SLATED TO BE CREATED IN THE VATICAN TO DEAL WITH IT, JUST PIOUS WORDS ABOUT MORE CHANGE IN THE CHURCH AND SYNODALITY--GOOD GRIEF

This is from Whispers in the Loggia:

Expanding PA Probe, Feds Warn US Church: "All Your Files Are Belong To Us" 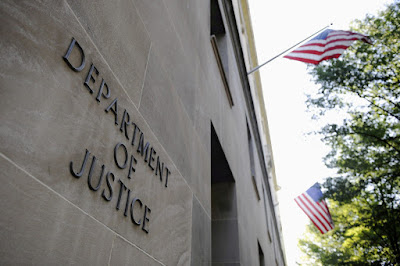 (...) over the last 48 hours, many of you have had Memphis on your lips given Wednesday's striking removal of Bishop Martin Holley – given his refusal to resign, the first such Roman move on a US prelate in living memory – followed quickly by the deposed prelate's even more breathtaking self-immolation in an interview published late Thursday by Catholic News Agency.

Well-placed as that focus might've been yesterday, now, something even bigger's come to pass....

A week since initial word emerged of the US Department of Justice's most sweeping investigation to date into abuse and its cover-up, as an extension into the Feds' nascent grand-jury probe of the dioceses of Pennsylvania, every last Stateside Chancery has now received an effective nationwide order "to not destroy, discard, dispose of, delete, or alter" a host of records pertaining to personnel in general, and abuse – and its related claims – in particular.

Dated October 9th – the same day the FBI swooped in with subpoenas for the clerical files of Pennsylvania's eight Latin-church dioceses and two Eastern archeparchies – the letter was privately circulated to the nation's hierarchy by the US Conference of Catholic Bishops on Tuesday, 23 October, and has duly spread since among internal counsels and personnel-chiefs across the Stateside church's 198 jurisdictions.

Addressed to the bench's president, Houston's Cardinal Daniel DiNardo, the "requested" national "hold" of documents was signed by William McSwain, the Trump-appointed US Attorney for the Eastern District of Pennsylvania, whose Philadelphia-based office has launched the historic investigation – believed to be the first such inquest seeking to put the church under the microscope of the Federal "RICO" laws: the racketeering statutes usually reserved for organized crime.

While Whispers has obtained and confirmed the full document – which includes a sprawling, 20-point addendum citing specific instances in Canon Law – to avoid what's become an increasingly casual and common plagiarism of these pages' work by other entities, here's the first page of McSwain's letter: 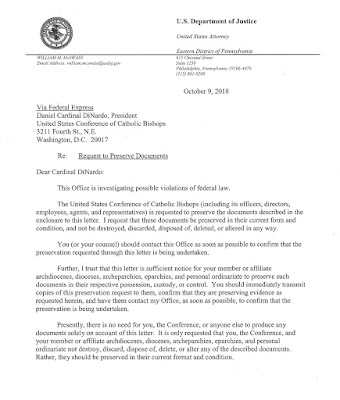 Originally slated for Wednesday of this week, house ops report that the first appearance of the Pennsylvania bishops before the Federal panel has been slightly delayed.
Meanwhile, given the lack of civil or canonical jurisdiction the DC Mothership has over the dioceses – an issue likewise relevant to the coming debates over prelates' accountability apart from the oversight of the Holy See – it bears noting that legal disputes over the force of any request to the USCCB have already flared up anew in the dioceses. Nonetheless, as it's the Feds calling, to an unprecedented degree, the warning is served.

Keeping with the Justice Department's usual practice, the US Attorney's Office in Philadelphia routinely refuses to "confirm or deny" the existence of the Pennsylvania investigation, its explicit communication on the case only to occur if and when indictments are produced.
Posted by Fr. Allan J. McDonald at Friday, October 26, 2018

Press in the article I post the blue "breathtaking self-immolation" and yes just one more twist in the meltdown of scandals we are experiencing as though in a perpetual full moon! The Memphis case is getting stranger and stranger on many many levels.

Well, race may well come into it....Memphis is a very racially-polarized city, much like Augusta and Savannah, and even Atlanta. Last night, Atlanta's archbishop spoke at a Catholic-Jewish gathering at 30327 (4th meeting celebrating 50 years of a Vatican document on Catholic-Jewish relations) and greeted me---if I had known about Memphis at that time, wonder if I should have asked him about it? (Memphis, though, is not part of the Archdiocese of Atlanta.)

One can debate whether Memphis should even be a diocese---the Catholic population in Tennessee can't be all that big---but perhaps it is a reflection of the state's geography, nearly 500 miles wide from the southwest tip in Memphis to Bristol in northeast Tennessee bordering Virginia. Would be a lot of territory for one bishop to cover. Thus, the Catholics, like the Episcopalians, divide the state into 3 dioceses---western (Memphis), central (Nashville) and eastern (Knoxville).

Anyone know procedures for removing bishops in the Anglican Communion and the Eastern Orthodox Church?

In the Orthodox Church, the synod or a group of bishops can depose a bishop. There are historical examples of the people deposing bishops as well. A bishop's clergy could also start the process for deposing the bishop by, for example, ceasing to commemorate the bishop during the Liturgy.

We might soon get to see for ourselves the deposition of a patriarch. That would likely take place at a council, as it has in the past when patriarchs were deposed.