IF THERE WAS EVER A THOUGHT THAT A POPE COULD NOT MAKE AN ERROR IN JUDGMENT, WHAT POPE PAUL VI SAID ABOUT THE 1962 ROMAN MISSAL SHOULD PROVE THAT PREMISE WRONG! 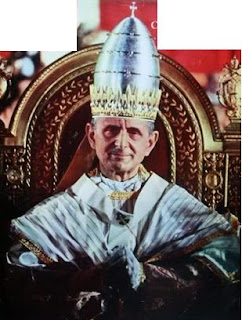 Paul VI, asked by his philosopher friend Jean Guitton why he would not concede the 1962 missal to Archbishop Marcel Lefebvre and his followers who rejected the liturgical reform:


What in fact has done this? An inept, arrogant and corrupt hierarchy that has led the Church and her doctrinal and moral authority to a catastrophe.

Fixing that which wasn’t broken and replacing the authentic worship of Jesus Christ with worshiping a pastoral ecumenical council did all and more than Paul VI ever thought would shake the authority of a council, it shakes the authority of the Church in general and shakes the personal faith of countless numbers of Catholics.

The Apostolic Authority of the Council and its revised Missal HAVE been shaken.

Not by the Old Rite. They have been shaken by their own creation (actually concoction) and their inability to bear fruit or sustain the Church. The Church is collapsing under the weight of its own false paradigm of fake renewal that has nothing to support it. Only the time-tested truths of the faith and tradition can truly support.

A return to the actual Catholic faith is the only remedy. THE ONLY REMEDY. That includes the Mass that formed so many saints.

Going to the NCR link above, there is that major neo-Modernist point being espoused around which almost every other liturgical novelty revolves, viz., that Vatican II introduced a new ecclesiology that is incompatible with the old. This is a point which is always hammered on, because without it the entire neo-Modernist edifice of liturgical reform collapses. It is a position that perhaps Paul VI held, although it is not clear whether he merely followed the advice of Bugnini and hi ilk on this, but certainly it is not the position of Benedict XVI.

There is no new (exclusive) ecclesiology in Vatican II; the faithful are not on the same ontological level as the ordained priest. The ordained priest is ontologically different from the non-ordained faithful, so active participation in the Mass does not mean being a co-priest, constantly vocalising with or listening to what the priest says at the altar to God; there is no need for the constant babble at Mass that allows no room for silent contemplation that would give the faithful the time and space to silently listen to the wordless voice of God in their hearts. As Cdl Sarah has said, the EF is the paradigm for silent contemplation during the liturgy, not the contrived silence as in the NO.