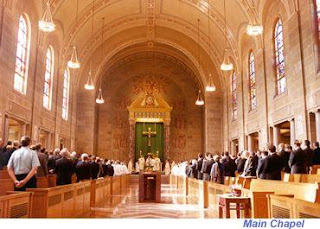 Fr. Michael Kavanaugh (hopefully the witches' hex last night on Justice Kavanaugh didn't extend to all Kavanaughs by accident) alerted me to an article in the Washington Post on Seminary Formation.

Below my comments are five suggestions for things that need to change. But here are my comments first:

1. We need manly men who are docile to the Holy Spirit and the Deposit of Faith, but aren't soft or easily manipulated by those who might want to take advantage of them. In other words we need men who want to be married but have the capacity by the grace of God's Divine calling to forgo Sacramental marriage for the kingdom of God and who can redirect sexual energy to spiritual fatherhood, leadership and enabling lay Catholics to be great laymen in the church and most importantly in the world.

2. There needs to be a rediscovery of the unique sacramental identity of the priest that isn't focused on social work, administration (although this is important) or just being a nice guy with a great personality. We need men of faith, hope and love who act like men who understand that they act in the Person of Christ, Head of the Church but not in an authoritarian, aloof or dictatorial way.

3. We need seminarians and priests who can kick a superior in the balls who is trying to sexually groom them--which means men with a strong masculine identity. Soft candidates who act like high schoolers trying to please authority figures or be praised by them or promoted by them is simply sick.

4. We need seminarians and priests who are worldly in the best sense of the word and fully cognizant of their own sexual identity and who by God's grace use their heterosexual identity to promote the Kingdom of God and Jesus as the Son of Man.

5. There needs to be a sense of discipline, order, and manliness in seminary formation, in the liturgy and in ministry of ordained priests. What was good in the monastic and strict seminaries of the 1950's should be reexamined and what was good recovered.

So what needs to change?


First, an overemphasis on academics must yield to a sharper focus on forming candidates who are emotionally mature and have a healthy, well-integrated personality and spirituality. If we’ve learned one thing since the crisis of clergy sexual abuse erupted in 2002, it’s that many abusive priests reached ordination in a stage of arrested psychosexual and emotional development. Where focus on personal psychological integration is lacking, space opens for disordered living of precisely the type that has made headlines in recent months.

Second, bishops need to work urgently to ensure that in our seminaries there reigns an inner culture of trust, transparency and honest dialogue between seminarians and the formation team. It has pained me to hear, in recent weeks, for example, that some seminarians have felt prohibited from engaging in open dialogue about McCarrick or a grand jury report about clergy sexual abuse in Pennsylvania. Such censoring of honest reactions is utterly wrongheaded. Seminarians must feel that they can freely, frankly and confidently express to the formation team their concerns about the seminary community, their opinions about the formation process and any other honest apprehension or contribution they want to make in the spirit of honest dialogue.


Although I would like to think that the vast majority of our seminaries are healthy environments, to the extent that seminarians might have concerns about their own safety or exposure to potential exploitation, every seminary should have a clear sexual harassment policy and corresponding protocols. Seminaries should appoint an independent ombudsman whom anyone (seminarian, lay student, staff member) can contact, independently of the diocese as part of that policy.

Third, in general, bishops need to slow down the rush to ordination and consider a minimum age for beginning seminary formation — perhaps 22, with the candidate having a college degree and some work experience. They could then follow up with eight years of formation, beginning with a year dedicated to detoxing from the culture and social media, growth in self-knowledge, prayer and a secure masculine identity. The final year before priestly ordination would be dedicated to intensive fieldwork and pastoral ministry.

Given the pressing need for priests, however, the vast majority of bishops staunchly resist the idea of prolonging the formation process. But how is the church well served by rushing men to ordination before they are ready? When years later some of them falter, with addictions or other personal struggles, we all pay a heavy price.

The delayed maturation process of young men these days is well documented. My years of screening candidates for priesthood confirm that our men need ample time to allow life wounds to heal and to grow in a solid, well-integrated interior life. As challenging as it may be, bishops need to think in the direction of a future church with fewer, but better-formed, priests.

Fourth, bishops must not assign to seminary priests who lack the skill set and drive to become mentors, role models and moral guides — nuances all captured in the term “formator.” A doctorate in theology does not render a priest automatically suitable for such ministry. Bishops must also demand and provide for the ongoing professional formation of the formators themselves.

Sixth, the Center for Applied Research on the Apostolate (CARA) annually collects data on the 70 seminaries that serve American dioceses. As reported by CARA in 2017, 11 of those seminaries have 100 or more seminarians enrolled, but one-third have fewer than 50 seminarians. What must we conclude? The United States does not need 70 Catholic seminaries. So, let’s reduce the total number to 15 or 20 regional institutions. Let’s pool and share the best formators to serve as teams in these regional seminaries that offer the quality of formation our times require. Seminary formation needs radical rethinking. The bishops must be catalysts in this process.

The Rev. Thomas Berg is professor of moral theology, vice rector and director of admissions at St. Joseph’s Seminary in Yonkers, N.Y. He is the author of “Hurting in the Church: A Way Forward for Wounded Catholics.” He tweets at @frtberg.

This op-Ed does not address the main cause of the sex abuse scandal: Homosexual men being ordained to the priesthood. The vast majority of the victims have been prepubescent or teenage boys. The vast majority of the perpetrators have been homosexual priests. Want to reform the seminaries, Father Berg? Stop recruiting and ordaining homosexuals. No one wants to address this both without and within the Church because homosexual activity is prevalent among the hierarchy and considered acceptable behavior culturally and by the majority of Catholics, even though Church teaching has always condemned it as evil. And that is how the problem began. The clergy have not taught the people their faith. They have not made the salvation of souls their top priority. So evil crept in. And now they are all going to pay for it. Literally. The state should not be investigating these matters. Church and state should remain separate. But it has become so great a problem, the result will be priests on trial in criminal courts instead of being censured and removed by ecclesiastical courts as soon as their bad behavior became known to their superiors. The whole situation stinks to high heaven. And only heaven knows how it will end.
Posted by Fr. Allan J. McDonald at Sunday, October 21, 2018

I contacted the "witches" who were planning to "hex" Justice Kavanaugh, or some other such nonsense, and asked them to be very, very careful in aiming their maledictions. I reminded them that "Eye of newt and toe of frog, wool of bat and tongue of dog" is all very funny until some innocent bystander gets turned into a newt.

Thank you for you concern.

The only thing missing in the list is to have priests in the seminary with the guts to support a seminarian that resists being groomed for sex by any superior. It seems that the victims are not strong emotionally, but still young mentally and looking for strong father figures. Sexual predators can see this and exploit it. The young men are terrified of failing their families and failing God. The predator uses this hook to get what he wants more than anything, including Grace and any relationship with God. The seminaries may be able to spot this sort of predator, but have almost no role in treating it. The person needs care and treatment of a different sort. For example, I have to laugh cynically at the idea of Mr Mcarrick leading a life of contemplation and prayer that will accomplish anything that he is not already proven that he can resist. He may need an exorcist if there is any remnant left that believes in anything resembling a love of God. He may simply be so mentally ill that he may as well be deaf, dumb, and blind. But he does not need any access to another priest in a subordinate position.

If individuals, or groups, weren't so scared of being labeled as "haters" or "homophobes," I'd say there was a slight chance things will improve. My feelings are that even the current crisis, while resulting in condemnations of pedophilia, will ultimately result in reassurances that adult homosexual relationships are okay.

Yes, Dan, and that is what (not so) sweet Nancy Pelosi pushes---gay marriage and the other great evil, abortion on demand. She was quoted recently at some New York event about needing clarity on "a woman's right to choose." (Choose "what"? Well, we can probably figure that out. Cano 915, where are you?

And up here in Atlanta, with two competitive US House races, in one district (the 6th, parts of Cobb, DeKalb and Fulton Countiees), the Democrat *unsurprisingly) is warning that "a woman's right to choose is at stake." I sure hope the candidate pushing that, Lucy McBath, is not Catholic, but whether she is or not, shows the desperation among Democrats after the Kavanaugh confirmation.

The laywomen says homosexual activity is prevalent among the hierarchy. Does she have proof? We know about McCarrick, and years earlier Archbishop of Milwaukee, but have there been any other bishops in America "outed" for such activities?

This may sound a tad odd and irrelevant, but here goes:

I watched a video last night on why the Japanese Zero in WWII went from having overwhelming advantages to eventually being over-matched by the Allies. Part of the reason was development of better Allied aircraft like the F4. But more important was the fact that the Zero was designed with the explicit understanding that its pilots needed extensive training to use its capabilities effectively; as the war went on and the average pilot training dropped, the Zero became less and less feared.

The connection to this article is this: the need for extensive education is no less necessary for seminarians than was training for pilots. Cutting corners here will have the same effect as with pilot training - priests who are unable to apply our great "machine," the Faith and Tradition, in ministering to parishes.