WHEREIN I AGREE WITH POPE FRANCIS (AND ON MANY THINGS, BTW) 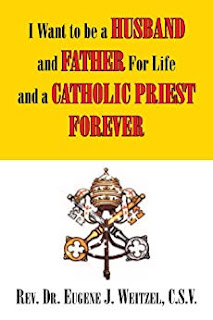 When I was vocation director, I often visited parishes in the Diocese to preach at their Sunday Masses.

One of my memes was that as vocation director I was looking for young men who wanted to be married and have children and be a husband to his wife and a good father to his children.

These kinds of men would make the best candidates for the priesthood. However, they had to recognize they also had a call or the gift of grace to assist them in the sacrifice of forgoing marriage and fatherhood to be married to the Church and a father to those in their parish or ministry.

This is what Pope Francis said today at his Wednesday audience which was a continuation of his catechesis on the 6th Commandment (the Catholic 6th, not the Protestant 6th):

Priests should be those called to serve their people as a father in a family and not include men simply “aspiring” to the “role," Pope Francis told the crowd during the Wednesday General Audience.

“They do not serve, and it's better that they stay at home,” he said of those who could be described as ‘wannabe’ priests.

Instead, the Pope explained, the Church needs “men to whom the Holy Spirit touches the heart with an unconditional love for the Bride of Christ” and that through “the priesthood we love the people of God with all the fatherhood, tenderness and strength of a husband and a father.”


The Holy Father's description of those who should become priests is the best anthropological/theological and dogmatic reason why women cannot be priests for as Divine Law orders, only a man can marry a bride who must be a woman and only a man can be a husband to his bride and only a man  can father a child. A woman cannot be a husband nor  can she be a father .
Posted by Fr. Allan J. McDonald at Wednesday, October 31, 2018

Model themselves after Saint Joseph.

"A woman cannot be a husband." Even the ones who play softball on the weekends and shave their heads?

Then why does he find it difficult to answer the 4 dubias? Why does he hesitate defrocking practicing homosexuals ordained contrary to settled magisterial teachings? I think he read that somewhere and sounded good then but by tomorrow he will say the opposite. Just the track record. No?