MY CATACHESIS ON HOW TO PARITICIPATE IN THE EXTRAORDINARY FORM 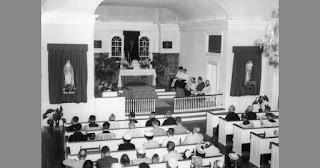 At my parish of St. Anne, we have begun an every Tuesday evening EF Low Mass. In addition we'll have our first ever in the new church EF Requiem for All Souls Friday night.

When I introduce this Mass to people who may never have experienced it or to older Catholics who don't remember quite as well as they thought they would the ethos and spirituality of this Mass, I feel that I need to offer some catechisis on how to actually participate in this Mass.

The word I use is that the EF Mass is more like "adoration of the Most Blessed Sacrament" during Solemn Exposition. The actual participation is more like adoration.

The Ordinary Form of the Mass, while sacrifice and thus worship seems to omit adoration which is really synonymous with worship/sacrifice.

The OF Mass is more like a classroom instruction rather than adoration. Thus everything has to be understood as in a classroom subject. The vernacular, the priest facing the people, seeing the unconsecrated bread and wine on the altar.

Adoration is the key to worship which is sacrifice. It needs to be recovered in the OF Mass which should more closely resemble the 1962 Missal in ethos and style.
Posted by Fr. Allan J. McDonald at Tuesday, October 30, 2018

This might explain why you see people leave right after communion in the OF. Even to the point of walking out the door still consuming the Host.

Then you have the conundrum of those that reverently enter the Adoration chapel, even to the point of prostration in front of the Blessed Sacrament but then recieve Our Lord in communion standing and in the hand.

Fr McD:
"Adoration is the key to worship which is sacrifice. It needs to be recovered in the OF Mass which should more closely resemble the 1962 Missal in ethos and style."
Can it really be recovered in the OF? The whole point of the liturgical reforms/deforms was the seemingly blasphemous "active participation above all else," that is to say, people first, God second if at all. Worship as adoration/sacrifice was not what the OF was fabricated for.

In my view, one of the more important things to learn about liturgy -- especially the traditional liturgies (the Latin and the Divine Liturgies) -- is that there is no one right way to participate. The method that suits one person may not suit another person. And the method that suits one this week may not be the best method to employ next week.

The methods are not the end, but a means to an end. Participation with whatever method is the means that leads to the immersion in the liturgy, which is the life of the Church and, consequently, oneness with the God-man who became incarnate to dwell with us.

Catachesis? This is just too rich for words.....

People have their own truth, declare their own gender or none and you begrudge me my own splelling?

Marc, you are exactly right and that is how it was prior to the priest facing the people and berating people for not participating lock-sink with what the Church told them to do after Vatican II. God forbid you didn't open your hymnal and at least lip sync the words of the hymn.

I think when the priest faces the same direction as the laity, he isn't concerned about how they are doing things. I don't advocate praying the rosary during Mass, but so what! At least they are there.

I wonder how many Catholics who at least respected the Church law to fulfill their obligation without any other motivation, were run out of parishes and attending Mass because they were berated for doing so or chose to participate in the Mass as they felt like doing.

I don't "begrudge" your misspellings.

I note them as examples of sloppy thinking.

I m a nifty hip priest of the with it generation who enjoys all kinds of entitlements already mentioned including my very sloppy thinking. Who are you to judge? Get with pipe Francis' agenda and his nifty youth ministry.

SO, maybe henceforth you'll hip your way into referring to the relationship between the Father and the Son as "homoiousios...? After all, you're entitled.

There. you. go, Fr.! Nifty indeed! Never give in to snarky nay-sayers. If said snarkers don’t like what you teach, they can go elsewhere to troll.
Banal self-serving snark is a lowlife tactic that never serves any purpose and certainly doesn’t encourage intelligent dialogue.

Vernacular is not required for the OR Mass: Read Sacrosanctum Concilium. I sometimes attend the Mass of the Norbertine Fathers. They pray the OR Mass beautifully all in Latin except for the readings and intercessions. They chant the introit for the processional and use the gradual instead of the responsorial psalm. The adoration you referenced is there at the most important part, the Canon. Granted the canon is prayed audibly, but we still feel like the priest is performing the sacrifice in the Sancum Sanctorum by virtue of the obscurity of the Latin.

Evelyn Waugh, after remarking that 'it is natural to the Germans to make a row', acutely observed: 'Participation in the Mass does not mean hearing our own voices. It means God hearing our voices ... I believe ... that I 'participate' in a work of art when I study it and love it silently. No need to shout.'

Anonymous offers no help, so it is not evident that sloppiness has been accurately identified. Anonymous is a troll. Ignore it.

A question one could ask, how many parishes are actually praying the Liturgy....the subtraction of the propers from the Liturgy (in spite of how good some of the hymns are) has lead to the vast majority of Roman parishes in the world (or at least the English speaking world...are objectively NOT praying the Liturgy, and as a result of this....well...I'm probably preaching to the choir here amongst the comments, we have seen well the effects

The OF, unfortunately in many places very much does feel like a classroom, and not the Worship of the Holy Trinity, one God.

The OF at its best is a pathetic attempt to some how copy the Eastern way of worship/praxis, and at worst it's an abomination against God. (Note, that doesn't mean it's invalid, but you can't tell me, that the LA Religious Education Congress style Masses are pleasing to God with all of the liturgical abuses under the sun)

I 100% agree with Marc, there is no one right way to participate in the Holy Liturgy, and this idea of everything must be ultra uniform, kind of bugs me to no end. One thing I've enjoyed about going east is the freedom to pray, and not be boggled up in forced conformity.

"Sloppy thinking" - accusation thrown at others who don't think exactly like I do!

Anyway comment section seems to be overrun by persons with a certain political point of view. I remember when it seemed that only Catholics visited this site.

Dan, you conveniently and self-servingly account yourself as one of the "Catholics" while relegating those who don't think exactly like you do to some lesser status.

Uhmm anonymous, I had said that already about myself. But thanks for the troll. Seems that's why you comment here.

Ummmm, Dan, I comment here, not because I am a troll, but because echo chambers are very dangerous things.

In your last comment, are you alluding to Pray Tell?

Guys (and gals, if here), c’mon! If you would stop responding to “Anonymous” snark, you might actually discourage rather than encourage those comments. That is you handle this behavioral issue with children and immature teens. Basic.