CRYSTAL CATHEDRAL, NOW WITH A CHRISTIAN NAME, CHRIST CATHEDRAL, IS STILL A CATECHUMEN BUT PROGRESSING TO BAPTISM, CONFIRMATION AND HOLY EUCHARIST IN THE NEAR FUTURE!

Rev. Robert Schuller's "Dutch Reformed" Crystal Cathedral in Orange, California was the epitome of celebrity christianity. But in keeping with the Protestant Tradition, Schuller's son disagreed with his dad's form of Christianity and became a new denomination. Then as dad got older, family squabbles and church politics led to the Crystal Cathedral's demise. It was purchased by the Diocese of Orange to become a baptized, confirmed and Holy Eucharist Cathedral in the Latin Rite of the Church.

They just turned on the new lighting system and as you can see, the crystals shine! I don't know if the would-be cathedral has undergone the Rite of Election yet. 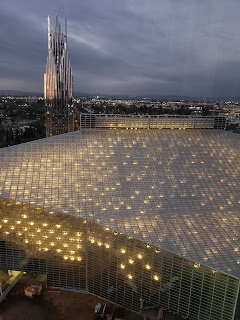 Fr. McDonald, Today I went and sat in St. Joseph's Church for a long time.
Thank you so much for all you did while in Macon to make this church so
beautiful for our God. You worked hard to make the church so beautiful.
Thank you, Julie

Thank you Julie for your kindness!

I don't like wreckovation of traditional churches, but I don't mind some experimentation with modern structures. The conversion process of this structure to Catholic worship is interesting, and the all glass nature of the building is rather striking. I looked at the renovation plans a while back, and I have to say my favorite thing was the plan to have flowering cherry trees around the whole perimeter of the sacred precincts. I hope they haven't given up on that great idea.

I was in the crystal cathedral shortly after it was purchased and it isn’t as big as it looks in photos, but the purchase includes the entire campus which is quite expansive with many other buildings.

Surely it was already validly baptized, but now needs only to make a Profession of Faith and receive the other Initiation Sacraments. I wonder how many window cleaners work there full time.

I doubt that Rev. Schuller baptized his crystal cathedral with Holy Water or any kind of water although there was a huge fountain down the center, so who knows? It will at least need a conditional baptism.

Ironic that the place was called Crystal Cathedral, even though there are no bishops in the Dutch Reformed Church. Sometimes you see evangelicals (especially black ones) calling their pastors "bishop"---I guess to increase their prestige---but that ain't a real bishop!