I DON'T GET IT! AREN'T ALL CATHOLIC PARISHES WELCOMING AND INCLUSIVE OF SINNERS? 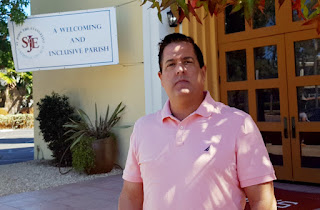 On any given Sunday in every parish where I have been a priest or a lay person, all kinds of people attend Mass from every nationality, race and sometimes creed.

They are all sinners for the most part. Some are adulterers, fornicators, sodomites, thieves, liars, coveters, idol worshipers, and the like.

No one has to show a pass to enter the Catholic Church and most priests don't know the spiritual health of the souls who present themselves for Holy Communion. Very few are excluded unless they are excommunicated or have a censure placed upon them, but how is the priest to know?

Usually presenting oneself for Holy Communion is a private matter and if the soul isn't in a state of grace that's between the communicant and God for the most part.

But this new inclusive craze to be welcoming of political groups in the Church be they LGBTQ, or democrats, Republicans or libertarians is quite puzzling.

Do we not challenge Democrats to work to become pro-life in their party's platform? Do we not encourage Republicans to be more concerned for the poor and migrants in their platforms?

Do we not ask libertarians to be less liberal and more conservative when it comes to the Catholic Faith and her morals and social teachings?

And well, you know, don't we call everyone to chastity according to their state in life to include the LGBTQ community? Is that unwelcoming of those who fundamentally disagree with the Church on chastity?

Can we welcome the pro-choice Catholic and ask them to change to becoming pro-life? Or is that too exclusive?

"Do we not ask libertarians to be less liberal and more conservative when it comes to the Catholic Faith and her morals and social teachings?"

Libertarianism is the political version of Pelagianism.

Libertarianism: "Left to its own devices, with little or no government interference, a community (neighborhood, city, state, nation) will, through radically free capitalism and enterprise, provide for the needs of all, or nearly all, its members."

Or, if you prefer, from the Cato Institute: "Libertarianism is the belief that each person has the right to live his life as he chooses so long as he respects the equal rights of others. Libertarians defend each person’s right to life, liberty, and property. In the libertarian view, voluntary agreement is the gold standard of human relationships. If there is no good reason to forbid something (a good reason being that it violates the rights of others), it should be allowed. Force should be reserved for prohibiting or punishing those who themselves use force, such as murderers, robbers, rapists, kidnappers, and defrauders (who practice a kind of theft). Most people live their own lives by that code of ethics. Libertarians believe that that code should be applied consistently, even to the actions of governments, which should be restricted to protecting people from violations of their rights. Governments should not use their powers to censor speech, conscript the young, prohibit voluntary exchanges, steal or “redistribute” property, or interfere in the lives of individuals who are otherwise minding their own business."

Both ignore the reality and effects of Original Sin.

Abortion is an intrinsic evil, how poverty and immigration is a prudential matter, so there is no moral equivalence. The Dems handle poverty by pursuing policies that create more poverty and they make a mockery of immigration by pursuing open borders and ignoring the rule of law. Trump's economic policies are creating jobs, good jobs, such that African-Americans and Hispanics are seeing their unemployment rates the lowest it has ever been (while Dems seethe and encourage mob behavior).

Actually, not every is welcome. Nor should they be.

I make no pretense that I am not a sinner. But since 2007, my "inclusive" parish in Valdosta has excluded me because I am "dangerous".

I pass a police clearance every two years for my job. I passed a federal security clearance in 1989. I have never been arrested. I serve Mass every week at a chapel 30 miles away. I have never threatened or harmed anyone, but I am "dangerous".

Several priests who never met me have let it be known they do not want me in "their" (as if they owned it) parish. All have refused to meet with me to talk (save one, who had enough sense to leave when 'movers" and "shakers" in the congregation turned on him).

This has been going on now for 11 years. I live 5 minutes away from the only Catholic Church here, yet I have spent thousands of needless dollars in gas to attend Mass elsewhere to meet my daily obligations (I used to be a daily Communicant).

Inclusive of sinners? I guess if you're a PC sinner or fit the diocese's template of the right kind of sinner, you are welcomed.

I drive many miles every week to meet my minimum WEEKLY obligation.

For someone who used to be a daily communicant, that is heartbreaking. I pray for God's mercy upon the persons who forced this to happen.

I'm saddened to hear about your predicament. Fr Dawid Kwiatkowski is at St John's in Valdosta now. I wonder if he is having difficulties too. I hope not, and am praying for you both.

How very sad, but as they say, the fish rots from the top. The top Fish is good at hurling insults while he condemns this modus operandi in others:

Francis himself is no stranger to insults, so much so that in 2013 Catholic blogger Laurence English released “The Pope Francis Little Book of Insults,” an online collection of various epithets the Holy Father has fired at various targets over the years.

“Mr. and Mrs. Whiner,” “superficial Christian,” “sloth-diseased,” “climbers...attached to money,” “pretender,” and “cursed, criminal” “men who work war” "fomenter of coprophagia!" are just some of the examples in the lengthy, fully-sourced document.

One of the Pope's all-time favorites is to denounce Catholics who love the traditions of their faith as "rigid."

Others include “pepper-faced,” “liquid,” and “weak-hoped” Christians; “museum mummies” and “old maids”; and priests and seminarians who qualify as “vain,” “wheeler-dealers,” “little monsters,” and “smarmy idolaters.”

We had heard some things about that Valdosta church and the old priest there that were disquieting. And we had heard the newer young priest (formed well by FRAJM!) was under the gun as well. So sorry. Praying.

Fr. McD's headline reads: "I DON'T GET IT! AREN'T ALL CATHOLIC PARISHES WELCOMING AND INCLUSIVE OF SINNERS?"

Father, you don't "get it" because it's a political maneuver to accuse Catholicism of "exclusivity" for having a moral code that names sin and calls people to conversion (to stop that sin).

Subtle and sneaky and evil. It's purpose is to "change" the moral code of the Church. And it's coming from inside...

We also have this problem at Epiphany Parish in NYC. The question is what do we do about it. We have a priest who wants mass to have "production values" (he was a film maker) musical numbers rather than hymns, re-writes, additions, and has turned the Narthex into a party room. He sings Cat Stevens songs during homilies! HE YELLS LIKE A BAPTIST PREACHER! Help!