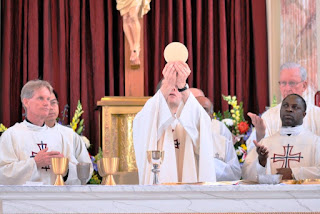 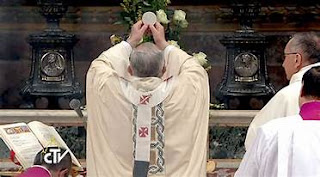 They are the same.

a closeted lover of ad orientem?

In the upper picture where the priest is facing the people and as such rudely has his back to the sacred place of the tabernacle reserved for Jesus, it looks like a magic show. Why have an elevation anyways, as the people can easily see the host and chalice in front of the priest without any elevation? As SC would say, it is a useless repetition.

In the lower picture, both priest and people adore the just transubstantiated elements as they are being elevated towards the cross as a sign of the Sacred Sacrifice they belong to. By looking at the Body and Blood of the Christ, the faithful can receive their special merit and virtue.

It is too bad that in the liturgical changes introduce by St John XXIII in the early 1960's, the Sanctus candle on the epistle side was suppressed (no thanks to Bugnini and his cohorts). This candle lit at the consecration would surely be an appropriate way of signifying Christ's physical presence at the altar for all to adore: otherwise, what suggestion of difference is there for the people to see before and after the consecration of the elements, especially when the priest faces the people?

In 1964 a small but significant change was made in the Canon of the Mass. The priest was enjoined to say or sing the Per Ipsum aloud and, omitting the signs of the cross, slightly elevate Host and Chalice and keep them raised throughout the prayer. This made the so-called 'minor elevation' more than it had been heretofore. In the Novus Ordo the rubrics require the priest to 'elevate' (no mention of 'slightly') the paten with the host, and the Chalice at this point, whereas at the Consecrations he is only required to 'show' Host and Chalice to the people.

As a result, many priests when celebrating ad populum make the elevation at the doxology into a major event, and the people are encouraged to elaborate the Amen (transmogrified into the 'great Amen') which is not specified in the rubrics.

This shifts the centre of gravity in the Eucharistic Prayer to its end. This is surely a nod to the Eastern tradition which holds that transubstantiation is effected not by the words of Consecration but by the Eucharistic Prayer as a whole. Another example of Byzantinization (for want of a better word) is the epiclesis in the newly-composed EPs which specifically invokes the Holy Ghost. This does not happen in the Roman Canon which is a clear demonstration that it is of greater antiquity than the Byzantine anaphoras.

Despite their pretended reverence for older forms, the reformers wanted to ditch the Roman Canon altogether. The fact that it survives as an option in the NO, albeit in a mutilated form, is due to the personal intervention of Pope Paul VI.