CAN THE COMPROMISED BE TRUSTED TO REFORM THE CORRUPT CLERGY AND HIERARCHY? 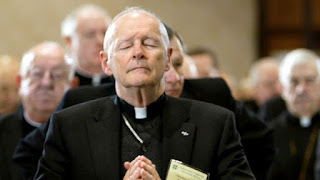 Archbishop Vigano makes a good point in the following paragraph:

Unquestionably there exist philandering clergy, and unquestionably they too damage their own souls, the souls of those whom they corrupt, and the Church at large. But these violations of priestly celibacy are usually confined to the individuals immediately involved. Philandering clergy usually do not recruit other philanderers, nor work to promote them, nor cover-up their misdeeds -- whereas the evidence for homosexual collusion, with its deep roots that are so difficult to eradicate, is overwhelming.

Homosexual clericalism isn't always just a philandering priest but networks are created, a sub-culture which I don't believe is true among heterosexual priests prone to break their vows.

Part of the scandal that Vigano realizes very well is that if there is collusion among homosexual priests, how can a homosexual priest or bishop who act out their perversions out a brother priest who in addition to being homosexual is a pederast of teenage boys who those of age who look like teenagers?

It is all very unseemly. In addition, the homosexual clericalism would make you think that immoral heterosexual sex with consenting partners is equally as bad as homosexual sex with consenting partners. But what the modernists in the Church want us to believe is that heterosexual sex, licit/moral or illicit/immoral is equal to homosexual sex which is always illicit/immoral and unnatural to boot. The actual sex acts are disordered and never open to the creation of new life, it is unnatural, meaning opposed to natural law.

The dance this pope and synod are trying to do with LGBTQ and whatever other initials you wish to place upon it (recently there was a report in a local newspaper about a man who was having sex with his dog and this had made the dog very aggressive to the point of having to be euthanized once it was discovered that the man was abusing his dog!), basically denies the unnaturalness of homosexual sex acts and implies an equality.
Posted by Fr. Allan J. McDonald at Friday, October 19, 2018

Question: “CAN THE COMPROMISED BE TRUSTED TO REFORM THE CORRUPT CLERGY AND HIERARCHY?"

The two major "issues" currently being discussed are:

It is obvious to me this will lead to the ultimate goal of "married" homosexual priests. It's only a matter of time, really.

Jack, I completely agree with you.

Marc, I hope God sends St. Michael the Archangel to intervene before that can happen.

I ask for prayers of healing. I took amoxicillin a few weeks ago, now I am looking a bit yellow. I am awaiting blood-test results.

Oh, yes, we've had married priests in the Catholic Church for 2000+ years and we can see all the great harm that has come from that...

Thank you, Jack! God bless you!

Amoxicillin, despite its benefits, can cause serious side effects.
I'm praying that in taking this antibiotic, any adverse impact on your physical
health will be minimal and temporary.

That is my prayer as well.