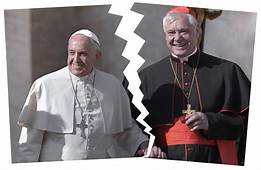 This is what Cardinal Mueller told Raymond Arroyo last Thursday night about the catastrophe we are experiencing:


“This goes back to the ‘60s and ‘70s,” Müller explained. ‘There was an [attitude that] Jesus preached love and we don’t need laws in the Church.”
“But this is stupid because we are a communion of men,” he continued. “Love comes from God, but we can become sinners or we can do crimes, and therefore the Church needs ... this [system] of penalties against its members, especially against the clergy.”
“We must return to the old system,” Müller stated.  “It was better. The old law in the canon law must be reestablished for overcoming this crisis.”
Yes, I remember the "new morality" I was taught in the 1970's. Pope Francis enunciates it very well today. The "Who am I to judge" mentality of the pope is 1970's through and through.
So is contempt for doctrine, thus the liberals of the 1970's did the best they could do to produce catechetical materials that had no substance other than feel good Catholicism, what many call coloring book cathoicism devoid of substance, doctrine, dogma, tradition and the 10 Commandments. The Beattitudes were emphasized as having supplanted the 10 Commandments.
The liberals of the 1970's laid the foundation to lawlessness. Being a doctor of the law was as bad in the 1970's and Pope Francis sees it today. This means the Church doesn't need canon law, only Christ's love of God and neighbor.
This the the ideology of rupture with the Church prior to Vatican II and the new Church of love that was promoted and Pope Francis has recovered.
The arroganance of the 1970's liberal/progressives is embodied in Pope Franics. The harshest, judgemental terms were reserved for traditionalist Catholics in the 1970's and this is the case today too with Pope Francis. Just think of the names His Holiness has attributed to traditionalists since day one. Just think of who is marginalized in this papacy.
Until the clericalism of the 1970's that tried and still tries to destroy the Catholicism of the ages is named for the monstrous infection of the Church that it is, nothing will change in the Church for the better. It will get worse and the Church smaller, but not more faithful.
Posted by Fr. Allan J. McDonald at Tuesday, October 09, 2018

Father McDonald, Pope Francis' "Who am I to judge" mentality is Catholicism 101.

"I would like permission to ask a delicate question: another image that has been going around the world is that of Monsignor Ricca and the news about his private life. I would like to know, Your Holiness, what you intend to do about this? How are you confronting this issue and how does Your Holiness intend to confront the whole question of the gay lobby?"

"About Monsignor Ricca: I did what canon law calls for, that is a preliminary investigation. And from this investigation, there was nothing of what had been alleged. We did not find anything of that. This is the response.

"When we confess our sins and we truly say, “I have sinned in this”, the Lord forgets, and so we have no right not to forget, because otherwise we would run the risk of the Lord not forgetting our sins. That is a danger.

"But, returning to your question more concretely. In this case, I conducted the preliminary investigation and we didn’t find anything. This is the first question.

Pope Francis made it clear:

-- A sinner seeks the Lord.

-- The sinner confesses his or her sin.

Pope Francis, who, time and again, has promoted Confession, presented in his above comments, Church teaching.

Who am I to judge a sinner who seeks the Lord, confesses, converts? Who disagrees with that?

Mark over and over again, you really don't get it do you! We very well can judge behavior. We can comment on what might loose someone's salvation but we can't make a judgement about if someone is in hell.

If you think that making judgments about moral behavior and correcting or admonishing the sinner is wrong, then you need to read Catholicism 101.

I appreciate your attempt at apologetic but your ultramontanism is off the charts.

I think it is time for you to wake up.

The 70's had a pretty infantile view of love: "Make love not war." The reason why we need laws is precisely because of love. Love can be good or bad depending on its object. To love satan or money is not the same as loving God or poverty. One has to discriminate between what is good and evil first, and then love the good, which is what laws codify for everyone. We love the sinner, not the sins.

Father McDonald, in regard to your claim that I practice ultramontanism:

Of all things...here is a great article about ultramontanism from Novus Ordo Watch.

However, in regard to the Papacy, the above article from Novus Ordo Watch, which quotes Church teaching extensively, destroys the notion that ultramontanism is bad.

I appreciate being viewed as one who practices ultramontanism.

Father McDonald, back to your comments about "Who am I to judge."

Father, you said: "Yes, I remember the "new morality" I was taught in the 1970's. Pope Francis enunciates it very well today. The "Who am I to judge" mentality of the pope is 1970's through and through."

Father, I produced Pope Francis' very words in regard to his "who am I to judge" remark.

-- A sinner seeks the Lord.

-- The sinner confesses his sin.

-- The sinner converts to the Lord.

-- Therefore, who am I to judge that person?

Father, how on earth does that constitute the "new morality?"

Mr Thomas:
Thank you for the quote: "...the Lord forgives, and when the Lord forgives, the Lord forgets and this is very important for our lives..." Like a Protestant, the pope has done away with purgatory. As the Catechism (1031) quotes, "certain offenses can be forgiven in this age, but certain others in the age to come." (St. Gregory the Great, Dial. 4,39:PL 77,396; cf. Mt 12:31.) Perhaps you are a saint who will go straight to heaven, but for most of us we will need "remission before God of the temporal punishment due to sins whose guilt has already been forgiven." (CCC 1471)

Francis with his lovey-dovey ideas does not seem to be capable of understanding the concept of satisfaction for sin, that there is a difference between culpa and poena, that indeed, as Aquinas discussed founding himself on the ideas of St Augustine, there is a difference between malum culpae and malum poenae. God does not forget, because He is omniscient and Just, as well as Merciful.

Mark, you still don't get it. We are not to judge the salvation of someone. The person that the pope was speaking of was/is a bishop who had been having homosexual affairs. Eveidently he had repented of this. But a bishop who is actively homosexual has no right under the laws of the Church or of God to remain a bishop without censure, the greatest being removed from the clerical state. The case Pope Francis glibly announced "Who am I to judge" is far more complicated than he let on and reminds us of how he defended Bishop Barros and condemned his accusers in Chile until Cardinal O'Malley corrected him and the pope repented publicly. would seem to call for some accountability concerning the appropriateness of giving a person like this a high ranking job in the Vatican apart from sacramental absolution.
That's the problem with Pope Francis' statement.

The Church judges any kind of sex outside of marriage as a mortal sin and a person can be judged guilty in a Catholic tribunal or in the Sacrament of Penance. Absolution removes the judgement of hell but not punishment due to forgiven sins.

Father McDonald said..."The person that the pope was speaking of was/is a bishop who had been having homosexual affairs. Eveidently he had repented of this."

Father, are you talking about Monsignor Ricca? If so, as Pope Francis said, the Church investigated the charges in question.

Pope Francis stated: "And from this investigation, there was nothing of what had been alleged."

Father McDonald said..."The case Pope Francis glibly announced "Who am I to judge" is far more complicated than he let on and reminds us of how he defended Bishop Barros and condemned his accusers in Chile until Cardinal O'Malley corrected him and the pope repented publicly."

Sorry, Father, but I disagree respectfully with your having characterized as glib Pope Francis' "Who am I to judge" comment.

As said evidence is lacking, what is Pope Francis supposed to do?

As per the nonsense you spout I can only respond to the last question as you still don't get it. He should not have insulted any victim and as Cardinal Mueller so aptly reminds the Holy Father and people like you:

The victims must be treated with dignity and respect.

Pope Francis, MT had been given a letter from the victims by Card. O'Malley with evidence.

This ends this discussion MT. Any further apologetics from you I will not publish.

I am sorry that I am unable to locate massive amounts of Catholics in my area who are supposedly in a massive state of confusion in regard to Church teaching...

...in a massive state of turmoil over Pope Francis, the dubia, the lies concocted by Archbishop Vigano...the "who am I to judge" statement...the garbage Pennsylvania Report.

Anyway, to speak for myself, I am not confused as to what I am to believe as a Catholic. I am not in turmoil in regard to the Church...in regard to Pope Francis' Pontificate.

I don't have any beef with Pope Francis. I felt the during the reigns of Popes Saint John XXIII, Blessed Paul VI, John Paul I, Saint John Paul II, and Benedict XVI.

Sorry, but I am not in turmoil in regard to the Faith.

Feel free to label me an "ultramontanist." That is fine with me.

As an "ultramontanist," I possess unrelenting faith and serenity in God's Church and His Papacy.

Wow. Mark Thomas disagrees with you and for THAT REASON ONLY you banish him

Anonymous, I don't think it's the fact that MT disagrees that will hopefully get him banished, but the insanity.

Father McDonald said..."This ends this discussion MT. Any further apologetics from you I will not publish."

Father, I respect that this is your blog.

I have been banned from Rorate Caeli's Twitter...same with Pray Tell, Novus Ordo Watch, Laurence England's blog...and additional right-and-left wing blogs/Twitter feeds that I am unable to recall.

I stand with His Holiness Pope Francis.

I am happy to be labeled an "ultramontanist," as that means that I submit to the Church's teachings in regard to Her Pope.

Thank you, Father McDonald for having allowed me to have posted to your important and wonderful blog.

Thank you, Father, for your holy service to the True Church.

Thank you, Father, for the support that you've given to the TLM.

Even a college kid sees what you don't

TJM, you know better! Rorate caeli is one of those right wing, rad trad blogs that MT thinks are full of lies.

Except Rorate Caeli has a better track record than the National Anti-Catholic Reporter.

I suspect that you were banned from these forums not for your views but for your prolixity, repetitiveness and utter predictability.

I have known people banned from pubs not because of drunkenness or violence but simply because they bored the other customers.

You are the archetypal pub bore.

Sorry, your heart is in the right place, but you need to face up to facts.