SEXUAL HARASSMENT AND LITURGY, IS IT POSSIBLE? 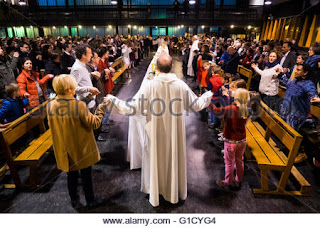 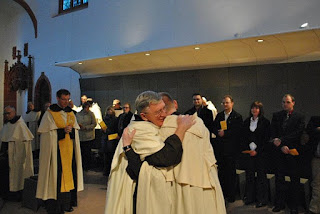 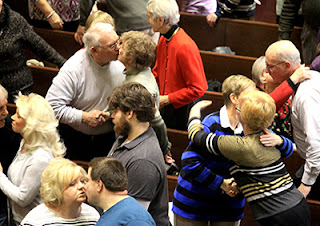 We had a deanery meeting today in Savannah and a presentation on sexual harassment in the work place.

Most of it is commonsense things covered by civil law.

But an eye opener for me is that as the "CEO" if you will, as pastor, I am responsible for all things that go on in the work place to include visitors, vendors, volunteers or anyone on our property. YIKES!

How many of you remember the "love fest" that the Sign of Peace became at these 1960's and70's Masses, especially small group Masses? We jokingly called the Sign of Peace the "Liturgy of Peace" long hugs and God knows what else.

But also think of those priests who encouraged handholding during the Our Father. When I first arrived in Macon in 2004 it was quite common in the congregation until I told my new parish that holding hands at the Our Father is not a gesture that is in the "rubrics" of the Mass and that they shouldn't do it.

You would have thought I was the Grinch who stole Christmas!

But I had many people tell me privately that they did not like holding hands with strangers or anyone during Mass and it was an invasion of their personal space and that some people were too eager to hold their hands!  I think we can classify that as sexual harassment at Mass especially those unwanted hands coming toward us to hold our hand!

The same can be said of the Sign of Peace!

All this makes me long for the Extraordinary Form of the Mass which has none of this nonsense. The only problem there is that pews allow others to sit up against you. O MY!

Your thoughts on "sexual harassment" at Mass.
Posted by Fr. Allan J. McDonald at Tuesday, October 23, 2018

Get rid of the pews.

A person who does not wish to hold hands or offer a handshake at the Sign of Peace can simply keep his/her hands together in prayer.

And then there's that guy who always takes up the collection in the section of the church where I sit. I just KNOW that he is leering at me, imagining all sorts of inappropriate things. And when the priest says, "The Lord be with you." I just KNOW he is harboring un-chaste thoughts. He should be wearing some kind of blindfold so that he cannot perceive the presence of others. Maybe I should wear one as well...

I'm not sure it is sexual harrassment but it is annoying when the person next to you doesn't take the clue when your hands are folded.

Despite Anonymous's predictable sarky comments, people should be allowed to connect with the liturgy in a way appropriate to themselves, providing that they show due consideration for other worshippers. If someone wants to kneel throughout the Mass and pray the Rosary, then it is his or her prerogative. Since the Mass is nowadays usually in the vernacular, someone with no knowledge of the local language would not be able to 'participate' in the noisy way that participation is commonly and erroneously understood.

Thankfully hand-holding during the Pater Noster has not crosssed the Atlantic and you don't see the 'beach-ball' posture, although some people turn the palms upwards as if they were holding a large invisible parcel (Moslems pray in a similar way). They are not disturbing their neighbours, so their eccentricity is quite tolerable.

I did object, some years ago, to being tapped on the shoulder by an officious verger to remind me that it is my turn to join the chow-line (sorry, 'Communion Procession') and the woman who twice prodded me in the back to get me to turn round at the Pax - at the Oxford Oratory, no less - elicited a response from me that was not exactly pacific.

It's all a nonsense, really, and like so much in the Novus Ordo was not properly thought out. Still, as Bouyer pointed out, they were recasting, from top to bottom and in a few months, an entire liturgy which had taken twenty centuries to develop. When I attend the NO these days it is sung in Latin, ad apsidem. But it still has a capacity to irritate. Now that the classic Roman Rite is more widely available, the shortcomings of the NO are shown up in sharper relief. No wonder Bugnini wanted it juridically suppressed. But even Paul VI realized that this was ultra vires.