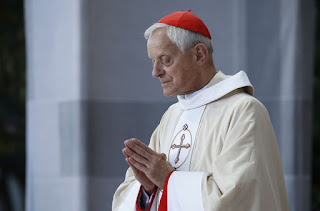 In reporting Pope Francis' acceptance of Donald Cardinal Wuerl's resignation as the Archbishop of Washington, the National Chismatic Reporter (NCR) that far left polarizing publication in the business of promoting immorality and doctrinal confusion in the Church since Vatican II has some interesting comments concerning Wuerl's resignation.

Here are some money quotes with my astute comments in red:

Wuerl's resignation comes as Francis is under intense global scrutiny over his handling of clergy abuse cases after a Vatican ambassador released a document in August alleging a systemic cover-up of allegations against now ex-cardinal Theodore McCarrick, Wuerl's predecessor in Washington. (So we can blame Vigano who broke pontifical secrets for bringing to light the McCarrick affair which in substance was confirmed by Ouelett. Interesting, no? Isn't this how progressives protect the wrong doing of their own, blame the whistle blower?)

Nicholas Cafardi also noted that some right-wing Catholic groups have been expressing opposition to Wuerl, and calling for his resignation, since at least 2004, when the then-bishop said he would not refuse Communion to then-Democratic presidential candidate John Kerry, a Catholic who supported abortion rights.

"I have to wonder: is this not part of the agenda of the rightwing crowd that is out to end the Holy Father?" asked the former dean of Duquesne University School of Law. "It's hard not to see a political side." (Are only believing Catholics worried about the salvation of a person who enables abortion, even partial birth abortion, who makes a sacrilegious Communion unrepentant of public scandal and the loss of human life. Is it better to ignore the murder of babies that he enables so that he can receive Holy Communion in peace. It sounds like covering up for bishops and priests who enable the homosexual molestation of teenage boys, doesn't it. Leave it to the progressives to criticize those who bring to light horrible crimes that scream to God for vengeance! )

You can read the rest of the NCR's praise of Cardinal Wuerl for all the good things he accomplished, which indeed he did but he also enabled several priests in Pittsburgh guilty of homosexual abuse of teenage boys to go free and be reassigned elsewhere: Wuerl resigns, ending influential tenure in wake of abuse report.  I am sure those priests did a great deal of good too, except they molested some teenage boys. Why should that be held against them considering all the good they did?

And then you can read Sean Winters at the NCR who blames the ultra right and not so ultra right press and bloggers for bringing to light the horrors of the scandals in the Church here:Wuerl hounded from office for becoming face of abuse crisis.

Here is but one soundbite that sounds like conservative Catholics back in 2002 deriding the Boston Globe as being anti Catholic for their Spotlight on all the abusive priests there, doesn't it?!?

I will also stipulate that Wuerl and the other cardinals and bishops who support Pope Francis have been negligent in confronting the schismatic cancer in their midst in recent years. There will always be crackpot groups like LifeSiteNews and Church Militant, but the bishops should have insisted that the National Catholic Register and EWTN isolate those groups, not make the wall between them porous, not indulge them, not adopt their interpretative lens. When the dossier of Archbishop Carlo Maria Viganó came out at the Register, with a translation from someone at LifeSiteNews, the connections were there for all to see. I am astounded that the CEO of EWTN and Register publisher, Michael Warsaw, is still an official consultant to the Vatican dicastery on communications. His media outlets are, as Cameroon Doody explained at Religion Digital, part of an organized effort to attack Pope Francis, all of it driven by "dinero sucio" (dirty money).
Posted by Fr. Allan J. McDonald at Friday, October 12, 2018

And then there is Cupich, handpicked by McCarrick, who spews forth his disgusting agenda:

“Not many of you should become teachers, my fellow believers, because you know that we who teach will be judged more strictly. (James 3:1)

Wayland Brown is a symptom said...

The language of polarization has divided us into "left/right" groups.

So, observe: The left shouts at people in restaurants, stores, their homes and anywhere and everywhere in public and claims it as their "right to protest".

The right published news reports, letters and commentary and we are "hounding a bishop out of office".

Oh, how one longs for reality!

Really? You've got to be kidding.

At the end of the day, the much-maligned FSSPX must be thanked for keeping the pressure on that led to Summorum Pontificum.

I suspect the same will be said for Church Militant Media when the filth is finally cleaned out of the Church.

Thank goodness for such "crackpots".