BEFORE AND AFTERS GONE WILD MORE OR LESS 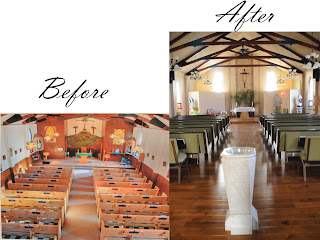 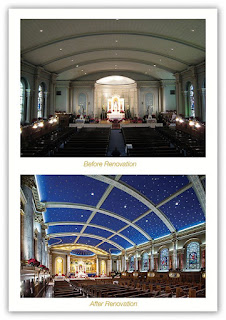 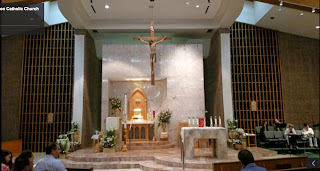 The 1st one posted is insipid, why in the name of heaven would you NOT put the sanctuary back where it BELONGS
# 2 BIG improvement but too white for me, ferns instead of a proper altar back, and good grief GREEN pews?
# 3 looked good before but yowza, it is over the top gorgeous
# 4 don't see an after, dynamite would be a good tool for renovation
# 5 shoot the idiot that removed the high altar
# 6 The stone is an improvement but I was never a fan of Mary and Joseph floating in
air, they need something substantial under them, and so does the tabernacle

#1 A big improvement. Good lighting can make a world of difference.

#2 The green pews kinda work for me with the medium brown floor - it's a "foresty" vibe. I've never cared for the isosceles trapezoid base for an altar, but that's just me.

#5 The nekkid apse is overwhelming

#6 Most improved of the lot

The church in No.3 is badly proportioned - far too wide for its height. It needs side aisles separate from the nave. The 'after' picture reminds me of St Pancras - the railway station, not the nice neo-classical church on the other side of Euston Road.

Generally feel the same as everyone else. I laughed at John Nolan’s comment because I had the same general impression of a connectiong walkway in an airport, subway, or train station. I like Craftsman style quite a bit and think it can be done beautifully for a church. The FSSP church in Kansas City, Saint Philippine Duchesne, pulls it of pretty well with a Spanish influence.