SILENCE, WHAT WE NEED IS SILENCE, CAN'T WE HAVE SILENCE? ESPECIALLY DURING PRAYER AT MASS? 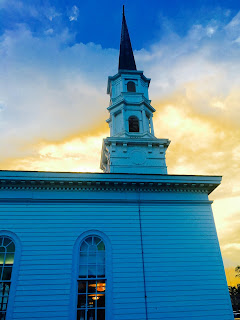 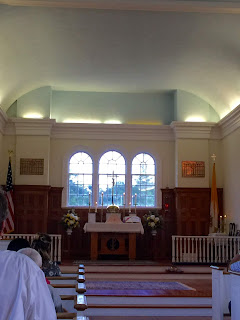 I began our every Tuesday Low Mass in the Ancient Form yesterday at St. Anne Church. It's at 6 PM. I gave a brief homily on the difference between the two forms of the one Latin Rite.

I encouraged the congregation to take part in the spoken parts of the Mass that the altar boy (in our case altar man) says. And they did very well. But I emphasized that the actual participation in the EF Mass is more contemplative, much like Adoration of the Most Blessed Sacrament.

Each person brings his or her own prayer to Mass, their own needs and the needs of their loved ones and acquaintances as well as the needs of the local, national and worldwide communities and Church.

Therefore in the EF Mass, silence is not something added to the Mass when nothing else is being said, but there is silence in the midst of the Church most public prayer, especially at the offering of the Roman Canon.

The priest offers the Canon in a low voice and we join his silence to our own in wonder and awe.

And since only the Roman Canon is used in this form of the Mass, everyone should know what it his without hearing it. They should pray it apart from Mass and thus will not need a worship aid such as a hand missal to follow the priest.

They should gaze upon the altar as the priest offers the canon in the Person of Christ, Head of the Church. Allow the sign language of the priest, his arm motions, bows, genuflection, kisses of the altar, the bells be a powerful "spoken" Word to their hearts as the Canon is prayed.

Yes, the world needs more silence. It's too noisey and to quote Pope Francis, via the Second Vatican Council:

"Refuse to give free course to the instincts of violence and hatred which beget wars and all their train of miseries. Be generous, pure, respectful and sincere, and build in enthusiasm a better world than your elders had."

I might add, make silence a form of your own spirituality with you contemplatively and thus actually participation in the holy of holies as though behind an iconostasis.

By the way, could you just imagine if the silent Roman Canon were added to the OF Mass with no other changes, how much more prayerful it would be for the holy people of God?
Posted by Fr. Allan J. McDonald at Wednesday, October 03, 2018

Even an audible Roman Canon is scarce as hen's teeth around these parts!

Yes, I read “The Power of Silence: Against the Dictatorship of Noise” by Cdl. Sarah...it’s wonderful!
Also, JJ, on your recommendation I’m currently reading “The Dictator Pope”. It’s so revealing and a lot to take in. I have a new understanding of our Church hierarchy and how we got to where we are. Thanks for the input.

"Our liturgical rites themselves, as the Church’s realisation and celebration of the most sacred realities we shall encounter in this life, must be themselves imbued with this silence and awe of God. I speak more of their having texture of the numinous, of the transcendent than of imposing specific periods of silence, which can at times be artificial. For I can be silent of heart and mind and body and yet be caught up in the awe of God at the Sacred Liturgy: provided that is celebrated optimally with that ritual multivalency which facilitates this so well. The solemn celebration of the Holy Mass in the usus antiquior is an excellent paradigm for this, with its layers of rich content and the many different points of connectivity which the action of Christ affords us, and which allows us to achieve this silence of heart, mind and body. This is certainly a treasure with which it can enrich some of the more horizontal and noisy celebrations of the usus recentior."

-Robert Cardinal Sarah, “Silence and the Primacy of God in the Sacred Liturgy”, Fifth Roman Colloquium on Summorum Pontificum, held at the Pontifical University of St Thomas (Angelicum), 2017.

Can you replace that window with stained glass or fill it in or does that need some kind of church counsel approval? It looks like a window over the kitchen sink.

I've never seen a window over a kitchen sink in three parts with arched tops.

Where do you get the idea that this looks like a kitchen window?