A HATEFUL,RACIST, SO IT IS REPORTED, CATHOLIC SISTER--SHOULD SHE BE FIRED TOO? 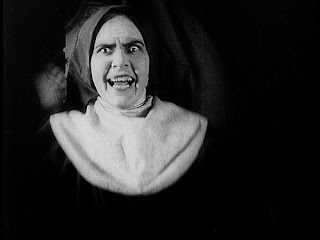 A mother who says she was lectured by a nun for breastfeeding her child at a doctor’s office is suing the practice for harassment.


On Thursday, while waiting to see her doctor at Mount St. Mary’s Neighborhood Health Center in Niagara Falls, N.Y., Nolah Carter, 24, nursed her 1-year-old daughter, Nature. Carter, a mother of two, had already asked the receptionist repeatedly if there was a private area to breastfeed, but feeling “brushed off,” and at the mercy of her hungry infant, she threw on a nursing cover and fed her child.
Thirty minutes into the feeding, Carter says an employee named Sister Nora burst into the waiting room. “She said, ‘That’s inappropriate — you can’t do that in here,'” Carter tells Yahoo Lifestyle. “She had pure hate in her eyes.”

According to Carter, the woman instructed her to nurse in either the sick area, a room where ill children wait for their appointments, or outside in the cold weather.

Embarrassed, Carter turned to leave and says Sister Nora yelled after her, “And I’m canceling your appointment!”

On Friday, Carter went to the police station and filed a harassment report against the health clinic. She’s also seeking legal representation. “This has happened before — one time I nursed my daughter in that waiting room and the receptionist kept skipping over me and delaying my appointment,” says Carter.


A representative of Mount St. Mary’s Neighborhood Health Center did not return Yahoo Lifestyle’s request for comment. The practice sent a statement to Buffalo news station WKBW that read: “Mount St. Mary’s respects the right of all patients to breastfeed their children and encourages breastfeeding in its hospital and health centers. We have been recognized for our efforts to promote breastfeeding, offering special programs, services, and accommodations to support breastfeeding mothers. The hospital’s Neighborhood Health Center offers a variety of services to patients of all ages. To create a more comfortable environment for a mom who was breastfeeding in the center’s waiting room, and other patients who were waiting for their appointments, we offered the mom a private room to feed her baby. When she declined the offer, she was politely asked to cover up. At no time was she asked to leave the center.”
Posted by Fr. Allan J. McDonald at Friday, October 26, 2018

Sr. Nora was wrong. She should not be fired, but instructed.

Oh not instructed, reprimanded and then slapped on the knuckles with the sharp edge of a ruler, and make to apologize in a letter of at least 500 words

I want to know where I can get satisfaction for all the negative things that happen to me and hurt me or anger me...like when a co-worker treats me with derision because she didn't like the way I was working on a project....and then she talks about it around the workplace so that everyone else also looks down on me too.

Please, tell me where I can get redress for this....

Good point, a lot of whiners. We have become a grievance culture

Why do you assume that the complainant was telling the truth? She could be a member of the growing army of attention-seekers and troublemakers.

Anyone who christens her daughter Nature is probably as mad as a box of frogs anyway.

Used to be in our society when someone in authority told that you were breaking a rule or committing an infraction against decency, the response from people of good character was, "Oh. I am SO sorry. Please excuse me." and then they stopped what they were doing right away. Only the most ill mannered persons were defiant.

Now we have a whole generation of self centered, self absorbed, defiant people reacting to enforcement of rules or social norms with rage, acting as if their own needs are paramount regardless of the situation or circumstances they find themselves in, and the needs of others around them are secondary, if important at all.

These are the people whose parents fed their "princess" or "super-hero" pretend games as kids, and never told them they were not the center of the universe.

And now we're stuck with them, trying to explain to these grown up narcissists what's wrong with their behavior.

And it results in lawsuits! Ei yi yi!