YOUNG PEOPLE IN THE CHURCH OF ENGLAND PREFER TRADITIONAL WORSHIPPING? 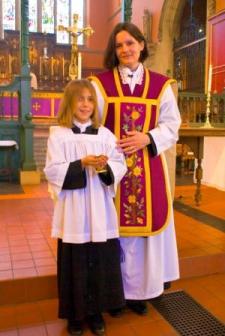 There’s a backlash in the Uber-liberal Church of England, young people prefer pre-Vatican II like Anglican worship rather than the night clubish crap being developed in so many parishes mimicking the non-denominational sects.

But is this traditionalism just another worship fad out of so many fads that Vatican II enabled not only in Catholicism but in Protestantism? I report; you decide:

Copied from the Deacon’s Bench:

Almost everything about services at St Bartholomew the Great church is old-fashioned. Purple-robed choristers process through clouds of pungent incense. The priest, the Rev Marcus Walker, brandishes an ornate golden King James Bible above his head before reading from the 1611 text. The liturgy is a mixture of 16th-century prose and sung Latin. The medieval priory church, which sits a stone’s throw from the central London hospital of the same name, was founded in 1123.
However, the congregation watching on at a recent service were younger than most would expect; at least a quarter were under 35. They had come to observe a handful of men and women, mostly in their late twenties, be baptized into the Anglican faith. Afterwards the millennials gathered inside the stone cloisters to explain why the archaic drama of traditional worship still appealed.

Several said they relished the connection to past generations of believers through reciting the Book of Common Prayer, which English Christians have been using since 1549. Others valued the beauty and history of the choral music and Shakespearean liturgy. They were not simply “young fogeys”, they insisted. Three of the group had separately found their way to St Bartholomew’s after becoming friendly with Walker on Twitter.

For years most of those longing for revival within the church have placed their hopes in the energetic evangelical wing exemplified by megachurches such as Holy Trinity Brompton (HTB) in west London. However, the baptisms at St Bartholomew’s were part of what some regard as a similar resurgence among the young within the Church of England’s Catholic wing.
Westcott House, a traditionalist theological college in Cambridge, has welcomed a steady stream of ordinands in their twenties and thirties. The two churches in the region sending the most young ordinands were Anglo-Catholic, the Rev Anna Matthews, a local vicar and diocesan official, said. Her church has produced six candidates in the past four years.
Some millennials raised in the more informal evangelical tradition are crossing over to the older style of worship. They describe the lure of a Christianity that does not aspire to be relevant or fashionable. The Rev Fergus Butler-Gallie, a 27-year-old priest in Liverpool, said churches did not need to “pretend to be your nightclub” to appeal to the young. “It can be church and have an air of mystery.”

Holy Trinity Brompton (HTB) is tucked behind the church of the London Oratory. It wasn't always trendy. Early in the 20th century one hears of Oratory priests, most of them converts from Anglicanism, tapping their feet to the sounds of familiar hymns emanating from the neighbouring church.

London boasts a number of splendid Anglo-Catholic churches. St Bartholomew is Norman and was once a priory church. However, Anglo-Catholics are even more marginalized in the CofE than ever, since the advent of priestesses and bishopesses.

We actually had a priest last month in 30327 mention "The Oxford Movement", the mid 19th century effort to restore some Catholic practices in the Church of England, but I think eyes glazed over. It may have been a reference to Cardinal Newman, who of course at one time was Anglican.

In the last 50 or so years, there generally has been a trend in the Episcopal Church of greater emphasis on the Eucharist (as the main Sunday worship), reinforced by (compared with previous generations) much wider use of the chasuble. Many parishes have moved their altar to the front as a sign of that too. (If you have the altar in the middle of the sanctuary, most likely you'll have the Eucharist at almost every service). But you still have some remnants of the Episcopal Church who are more "evangelical" (in the sense of disavowal of Eucharistic vestments, communion every Sunday and so on) that don't want to look "too Catholic"---the type of parish where the priest would only dress in alb and stole for the Mass, and Sundays might alternate between Morning Prayer and Holy Communion. I visited such a church in Charlotte one time, where not even at Christmas did the priest "dress up", much less use incense.

The Archbishop of Canterbury traditionally alternates between "high" and "low" in terms of appointment (though even the "low" ones still dress fairly "high", like with miter and cope, though maybe not the chasuble). Dr. (Geoffrey) Fisher, who was AOC between 1945-1961 and crowned Queen Elizabeth, was more on the "Low" side, while his successor, Dr. Michael Ramsey (1961-1974) was more on "High" end, reportedly even saying Mass daily. The current AOC, Justin Welby, is more associated with the low wing.