SO, OKAY, POPE JOHN XII WAS A SINNER, BUT AREN'T WE ALL AND WHO AM I TO JUDGE? I'LL JUST DEFER TO HIS HOLINESS 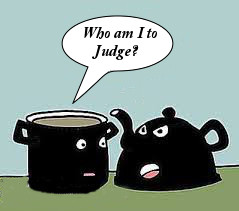 Thanks to DJR for posting this as a comment. It made me think that maybe the Church is the Whore of Babylon. But it also made me think of Fr. Addison Wright, SS, a liberal Scripture Scholar and teacher at my seminary in the 1970's who said, "The Church may be a whore, but she's still your mother!"

It also made me think that we are living in better papal time than then!

"Papal deference" for Catholics in former times was not an issue, particularly when popes were also secular princes.

It is for this purpose that Liudprand of Cremona, a partisan of the Holy Roman Emperor Otto I, gives an account of the charges levelled against him at the Synod of Rome in 963:

Then, rising up, the cardinal priest Peter testified that he himself had seen John XII celebrate Mass without taking communion. John, bishop of Narni, and John, a cardinal deacon, professed that they themselves saw that a deacon had been ordained in a horse stable, but were unsure of the time. Benedict, cardinal deacon, with other co-deacons and priests, said they knew that he had been paid for ordaining bishops, specifically that he had ordained a ten-year-old bishop in the city of Todi ... They testified about his adultery, which they did not see with their own eyes, but nonetheless knew with certainty: he had fornicated with the widow of Rainier, with Stephana his father's concubine, with the widow Anna, and with his own niece, and he made the sacred palace into a whorehouse. They said that he had gone hunting publicly; that he had blinded his confessor Benedict, and thereafter Benedict had died; that he had killed John, cardinal subdeacon, after castrating him; and that he had set fires, girded on a sword, and put on a helmet and cuirass. All, clerics as well as laymen, declared that he had toasted to the devil with wine. They said when playing at dice, he invoked Jupiter, Venus and other demons. They even said he did not celebrate Matins at the canonical hours nor did he make the sign of the cross
Posted by Fr. Allan J. McDonald at Saturday, January 19, 2019