A NOW FOR THE FRENCH REVOLUTION SIDE OF THIS CARDINAL SCANDAL

“In our era of transparency, all secrecy has become unpopular."

The tyranny of transparency, particularly promulgated by the media, was criticized throughout the trial by the defense, who also denounced the harshness of the “excessive media coverage” of “this theatrical trial.”

'Justice never consists of redressing an injustice by another injustice,' defense lawyer argues 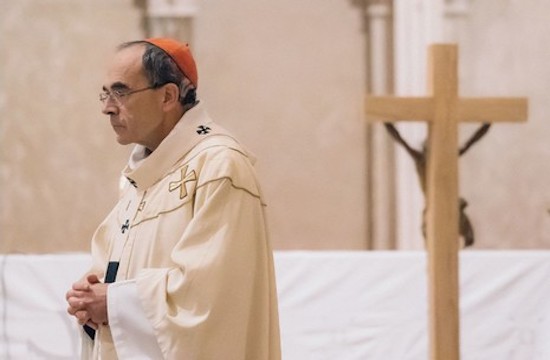 The trial of Cardinal Philippe Barbarin and five other senior Catholic officials ended in Lyon on Jan. 10 after four days that shook the French Church.

“Thanks to Alexandre [Hezez] for having been the first to lodge a complaint, thanks for having freed the spoken word and for having allowed me to hear Christian [Burdet]. This was overwhelming for me. I am not the same man as I was before. Thanks for having shaken the Church. Changes must be made. This must not stop here.”

These were the serious words spoken by Bishop Emmanuel Gobilliard as he looked into the eyes of François Devaux, a plaintiff and founder of La Parole Libérée (Freed Speech) association, during a break in proceedings.

This short encounter, sought by the auxiliary bishop of Lyon on the morning of Jan. 10, symbolized the shocking effect on the Church of this unprecedented trial, a private prosecution of Cardinal Barbarin and his associates by nine victims of Bernard Preynat, a former scouts’ chaplain accused of sexually abusing more than 70 children from 1970-80.

All who heard the words that have resonated in the courtroom since Jan. 7 have been irrevocably changed by them.

“We have listened to the suffering of the civil plaintiffs. And, if this can help them to bear the burden of their pain, we understand and accept this,” said Jérome Chomel de Varagnes, the lawyer representing Bishop Thierry Brac de la Perrière.

Nonetheless, the defense had continually warned the court against the risk of conflating Cardinal Barbarin and the institution of the Church.

“Is this man before you being arraigned as himself or as an incarnation of an institution or system?” asked the cardinal’s lawyer, Jean-Felix Luciani.

Referring to philosopher Immanuel Kant’s moral imperative, which demands that every man must be treated as an end not a means, the lawyer went on: “In these proceedings, has Philippe Barbarin become nothing but a means?”

However, before beginning his final argument — a powerful moment in this trial — Luciani acknowledged the mistakes made by the cardinal. Yes, he did not understand the magnitude of what was going on. Yes, he should have asked more questions. Yes, he is regretful. And yes, he would act differently today.

“But all of this does not constitute a crime,” he said.

Defense lawyers set about dismantling the two charges against Cardinal Barbarin and his entourage: the failure to help minors in peril and the failure to report the sexual abuse of minors.
The first of these charges was rapidly discounted, as the abuse occurred long ago and no new victims have been identified since 1991.

For the second charge, defense lawyers responded to the masterly arguments of the prosecution by stating that the obligation to report abuse can only apply when the victim is a minor.

“It is in the spirit of the law that each person should have the right to his or her complete freedom, and should not, against his or her will, be presented as a victim in the eyes of the world,” said defense lawyer Chomel de Varagnes.


Did the cardinal know the facts before 2014?

No, he did not, his lawyers stated. The record of Preynat’s case notes was not correctly transmitted to him in 2002 due to the early departure of his predecessors; and Preynat, as he himself admitted, did not make a detailed confession to the cardinal in 2010.

Nor was there any intention to obstruct justice, the defense claimed, reminding the court that the cardinal’s doors had been “wide open” during the initial investigation in 2016.

The defense argument also focused on professional confidentiality. According to the law, this obliges religious representatives, like lawyers and doctors, to maintain confidentiality over what is confided to them in their capacity as priests.

“In our era of transparency, all secrecy has become unpopular,” said Luciani.

The tyranny of transparency, particularly promulgated by the media, was criticized throughout the trial by the defense, who also denounced the harshness of the “excessive media coverage” of “this theatrical trial.”

Referring to the suffering of his client Régine Maire, defense lawyer Xavier Vahramian summed up the general sentiment of the defendants: “Justice never consists of redressing an injustice by another injustice.”

The court’s judgment will be delivered on March 7.

The Cardinal was ordained a priest in 1977. Is his "guilt" derivative under French law? Or was his failure that he was not clairvoyant in 1977 and knew he would be a cardinal someday, so that as a mere parish priest he should have taken steps in the 1970s? If so, the law is an ass.