DID POPE FRANCIS JUST CONDEMN THE LITURGY OF THE ENCLOSED CIRCLE FOCUSED ON THE PRIEST AND THE ASSEMBLY AND NOT ON GOD? I THINK SO! 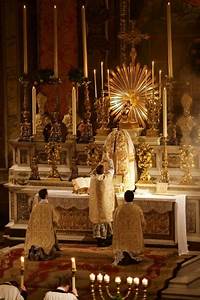 Below this post, I have posted Pope Francis' Epiphany homily which is very good and I've incorporated some of it into my revised homily today at our 11 AM Mass.

It seems to me that Pope Francis has made a wonderful case for Mass "ad orientem" in some of the words His Holiness uses in his Epiphany homily.

Vatican II has shifted (as spirit of Vatican II theologians have insisted) the center away from God and to us. We are at the center as God comes to save us as though in an "enclosed circle" looking at each other rather than beyond to God.  But we really aren't the center, the sun or the light and the pre-Vatican II Church with her organic theology and sacramental liturgies makes that perfectly clear. Not so after Vatican II, the center is changed and out of focus to say the least especially in reformed architecture of our churches, and the reformed liturgy with the celebrity priest facing us down and we looking to him and to each other rather than Christ.

Read what Pope Francis says in his homily for Epiphany:


But God’s light does not shine on those who shine with their own light. God “proposes” himself; he does not “impose” himself. He illumines; he does not blind. It is always a very tempting to confuse God’s light with the lights of the world. How many times have we pursued the seductive lights of power and celebrity, convinced that we are rendering good service to the Gospel! But by doing so, have we not turned the spotlight on the wrong place, because God was not there. His kindly light shines forth in humble love. How many times too, have we, as a Church, attempted to shine with our own light! Yet we are not the sun of humanity. We are the moon that, despite its shadows, reflects the true light, which is the Lord. He is the light of the world (cf. Jn 9:5). Him, not us.

Don’t get your hopes up, Fr Pope Francis detests the EF bough he won’t allow it to be eliminated as he is a crafty politician, and knows it would have the potential to create schism, were he to violate his predecessor’s Summorum Pontificum.

Why in God’s name would you EVER think that that man would promote the Traditional Mass or for that matter Catholic Dogma, Doctrine etc. The man hates Catholicism and is hell bent on remaking the Church into his image.

This is not catechesis, but eisegesis, "the process of interpreting a text or portion of text in such a way that the process introduces one's own presuppositions, agendas, or biases into and onto the text."

Father McDonald, your analysis in question is interesting.

Pope Francis, during an exchange with Bishop Rifan, declared that the TLM is a treasure for the Church.

Pope Francis declared the following early in his Pontificate:

"Once, speaking of the Western Church, of Western Europe, especially the Church that has grown most, they said this phrase to me: “Lux ex oriente, ex occidente luxus.” Consumerism, wellbeing, have done us so much harm.

"Instead you keep this beauty of God at the center, the reference. When one reads Dostoyevsky – I believe that for us all he must be an author to read and reread, because he has wisdom – one perceives what the Russian spirit is, the Eastern spirit.

"It’s something that will do us so much good. We are in need of this renewal, of this fresh air of the East, of this light of the East. John Paul II wrote it in his Letter. But so many times the luxus of the West makes us lose the horizon."

Pope Francis has called upon Catholics to resist the movement to legitimize homosexual "marriage."

"The family is also threatened by growing efforts on the part of some to redefine the very institution of marriage, tempted by confusing presentations of sexuality, marriage and the family."

"As you know, these realities are increasingly under attack from powerful forces which threaten to disfigure God's plan for creation..."

I've always maintained that PF is a good homilist; he is brief, he usually makes three distinct points, and doesn't ramble even when he occasionally departs from the text. I suspect it is his Jesuit training. His extempore 'fervorini' and airborne press conferences are more problematic, although on the flight back from Ireland last summer he upset the LGBT crowd by suggesting that children who manifested 'gay' tendencies should be referred to a psychiatrist.

Whatever PF may think of the traditional Mass is irrelevant. It's here to stay, and since SP doesn't mandate anything, and is based on the undeniable reality that the Church does not, and cannot abrogate orthodox and legitimate rites, it's hard to see how it can be overturned.

The photograph shows a solemn Christmastide Mass at the London Oratory. One can tell it is Novus Ordo by the absence of side altar cards and the fact that the 'subdeacon' is not holding the paten in a humeral veil. It is of course in Latin (except for the first two readings and the Bidding Prayers). Sunday after Sunday the 11 a.m. Solemn Mass is packed. Contrary to what some commentators here have suggested, Latin is not a big turn-off; along with traditional music and solemn ceremonial, it is actually a draw.

I could not agree more with your statement: "Latin is not a big turn-off; along with traditional music and solemn ceremonial, it is actually a draw." If it were, I would not be seeing so many young families at the EF I attend. Only condescending, ignorant lefties feel that way.