YES, BUT! SAY THAT 12 TIMES PLEASE

Apart from the photo below, which is the photo that Fr. Dwight Longenecker uses for his article, “Twelve Things I Like about the Novus Ordo Mass” what I like is what also drives me crazy or to say "yes, but" not 12 times, actually but 13 times.

Let's start with number 13 which isn't listed in his article about what he loves about the Ordinary Form of the Mass and that is the photo below. I have always contended and like very much the altar arrangement of the Catholic Cathedral in London (which is used in an Alfred Hitchcock movie as the setting for a murder when a man trying to kill the star of the show by pushing him off of the bell tower, actually plunges to his own death when he misses the star he is charging toward, but I digress, but it was and is a great movie).

The "Benedictine" altar arrangement is behind the free-standing altar but Mass could easily be celebrated facing the liturgical east without doing any rearranging, thus there is continuity between the two forms of the so-called one Roman Rite.

Yes, but, comes next. That crooked candle will drive me crazy during Mass even if my back is toward it rather than toward the congregation! 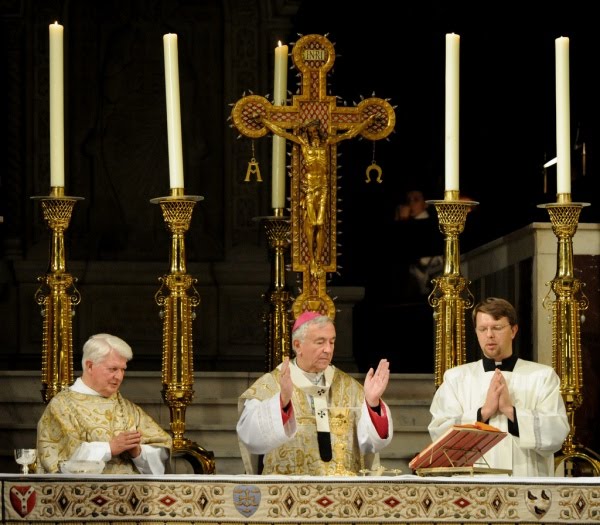 But here are Fr. Longenecker's praises of the Ordinary Form of the Mass. Unlike the verbose, Dr. Kwasniewski , I will offer in RED a brief but most astute, "yes, but" to each of the 12 points:

--In keeping with my own view that one should always give the benefit of the doubt and try to find what’s right rather than always find what’s wrong I thought I’d put together this list of what’s GOOD about the Novus Ordo Mass.

Father Longenecker has drunk the kool-aid. And in terms of the photo, I would really rather not see His Grace's kisser when he should be leading us in prayer towards the Liturgical East.

The Novus Ordo provides all sorts of opportunities for the priest to offend us with his novelties and "options." No thanks. After putting up with this show for 50 years, I have sworn it off and will only go to the NO under duress.

Fr.L ran out of suitable topics? Oh well, ex-Anglican, did not quite leave the old sod.

Eccles gives seven reasons why he prefers the Novus Ordo

The main thing I don't like about the OF is the constant lines, readers parading in and out of the "sanctuary" (at least it used to be sacred ) the procession or parade into church, the liturgy of the hand sanitizer, all eight distributors, 3 for the host (plus Fr) and one for the host in the loft and four for the cup, the communion conga line escorted out of the pews by the ushers, half to the front half to the back of church please, everybody out keep moving. Then Fr has at least six or seven vessels to clean not really a noble look bent over at the side table, the old ambulations were much more noble and looked sacred, then the evacuation of the sanctuary and glad handing down the aisle to shake everyone's hand as they leave all to the beat of dismal hip music that isn't hip and not catholic really., I finally cannot stand eagles wings any more. And lets not forget Fr's latest gig, applause for the choir before recessing, gag

I have a liking for the Latin low Mass, simple quiet and holy, no distractions, not about Fr Friendly and his groupies, just worship plain and simple, participation of the mind not the mouth and feet, so peaceful

Referring to the Westminster Cathedral photograph:

After V2 a temporary forward altar was installed. Until Cardinal Heenan's death in 1975 it was moved aside for the Capitular High Mass at 10.30 daily, which was celebrated at the high altar in Latin with deacon and subdeacon. However, under his successor Basil Hume it became more or less permanent, and the 10.30 Mass, though still in Latin, was no longer sung and was celebrated versus populum.

Various schemes to re-order the sanctuary permanently were stymied by the fact that Bentley's high altar could not be moved for structural reasons. Yet it had always been free-standing, and the cross and candles on a gradine behind it.

When Vincent Nichols was installed in 2009 the Mass was again celebrated at the high altar, although there was not much room behind it for the celebrants and ministers. The answer was to move the wall behind it by a few feet. When Benedict XVI visited in 2010 this had been done. The forward altar and its platform were permanently removed and henceforth Mass was to be celebrated under Bentley's magnificent baldacchino. Guido Marini insisted that an elegant silver crucifix and candlesticks be placed upon the altar, but after the Pope's visit they were removed.

Twice a year the Latin Mass Society has a Solemn Mass (EF) at the cathedral which is of course ad apsidem, and the sightlines are perfect. It would make sense for all solemn Masses to be celebrated this way, but it won't happen for ideological reasons.