THE VICTORY IS MINE! THE BAPTISM OF THE LORD IS A PART OF ORDINARY TIME IN THE ORDINARY FORM NOT THE CONCLUSION OF THE CHRISTMAS SEASON! AND HERE'S THE PROOF! GOD IS GOOD! 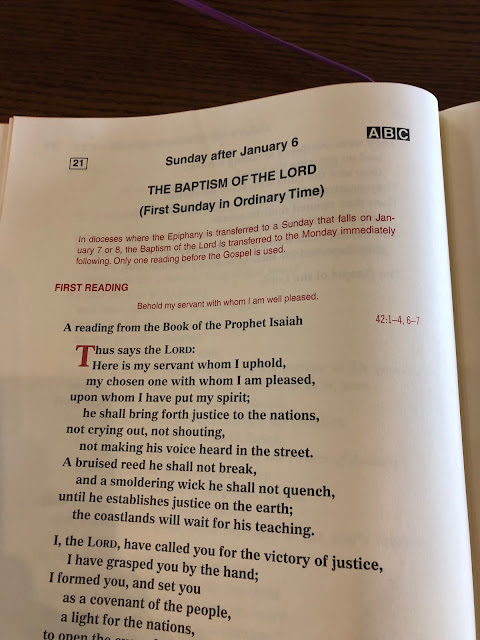 FROM THE BOOK OF THE GOSPELS! 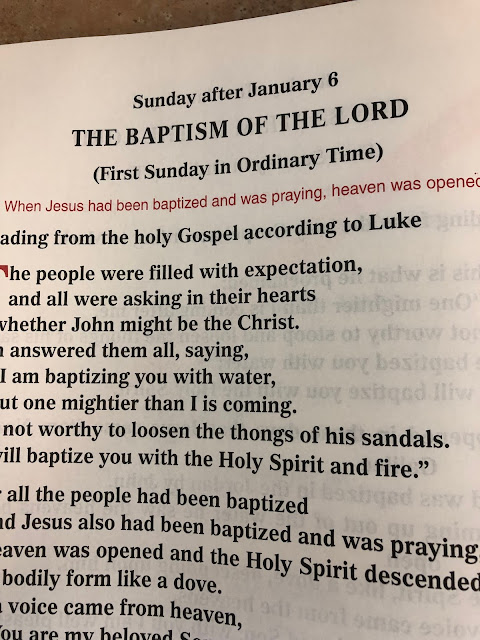 The ordo states, "Ordinary time begins on Monday, 14 January and continues through Tuesday, 5 March the day before Ash Wednesday and the beginning of the Lenten season."

Certainly an official hierarchically ordered liturgical book is to be believed over an ordo, no?

No. The annual Ordo is official.

The lectionary is not official in terms of liturgical seasons which can, as you know, vary from year to year. Perhaps the parenthetical phrase in the lectionary is an option, given the variations of the calendar.

"However, according to the Roman Catholic liturgical calendar, Ordinary Time doesn’t officially begin until the Monday after the Feast of the Baptism of the Lord, which (usually) falls on the Sunday after Epiphany (January 6th)."

The Liturgy of the Hours treats the Baptism of the Lord as part of the Christmas season. It surely has as much authority as the lectionary and Missal, as they were all promulgated by the exact same authority.

I think the text you point to is meant to indicate that this feast replaces what would otherwise be the first Sunday in Ordinary Time, in which case, it doesn't exist. Yes, it is confusing. All it proves is that whoever came up with that verbiage (and the labeling of days between Jan. 1 and Epiphany in the breviary) was not an American.

In the traditional calendar of the Roman Rite, the first Sunday after Pentecost is Trinity Sunday. This displaced the Mass for the first Sunday, but it still exists and is celebrated, without Gloria or Credo, on ferial days before Corpus Christi. Its Gospel (Luke 6, 36-42) is used as the Last Gospel on Trinity Sunday according to my 1961 Liber Usualis. However, I have not seen it done in recent years; presumably it was a casualty of the reforms of John XXIII.

Does this confusion perhaps suggest hesitance in relying on any single Novus Ordo source for definitive resolution of such questions? The traditional (EF) answer:

"After Compline of January 13 the Epiphany season ends, and the season 'throughout the year' begins." [aka 'ordinary time', more or less]

The Ordo gives the definitive Novus Ordo answer. "Ordinary time begins on Monday, 14 January and continues through Tuesday, 5 March the day before Ash Wednesday and the beginning of the Lenten season."

Any confusion is on the part of the reader, not the Ordo itself.

Sad that the Missal and Ordo are sooooo wring and the alectionary and I are sooooooo RIGHT!

The ordo states, "Ordinary time begins on Monday, 14 January and continues through Tuesday, 5 March the day before Ash Wednesday and the beginning of the Lenten season."

Well this is not definitive, but when I was at Mass at St. John Cantius yesterday, the Church was still decorated for Christmas, which suggests that the Canons there consider Sunday, January 13th part of the Christmas season.

What do they know!

Actually the Canons know a great deal about correct liturgical practice. They train priests across the country to celebrate the TLM properly, but I suspect you already knew that.

I recited the office from the Liturgy of the Hours yesterday which is in Volume ONE (Advent-Christmas).

After vespers the verbiage says that AFTER the celebration of the Baptism of the Lord, "Ordinary Time BEGINS".

There is no Perpetual novus ordo confusion. The Ordo plainly states The ordo states, "Ordinary time begins on Monday, 14 January and continues through Tuesday, 5 March the day before Ash Wednesday and the beginning of the Lenten season."

Then what about the page from the lectionary that Father McDonald posted? Seems contradictory to me.

This will depress "you know who:"

TJM the link does not work.

The story was posted this morning by US News and World Report. Strange that the link does not work.