I can't tell who the pope is in this photo, but it is clearly prior to Vatican II's reform of Pontifical Masses and accretions in papal liturgies.

It is clearly the ancient rite of the Church, not the post-Vatican II versions.

But the set up looks very much like the set up for outdoor Masses at St. Peter's today with only minor details changes, diluted or simplified.

But my point is that this is the ancient arrangement for the Ancient Latin Mass and predates the fixed altar against the wall that came into vogue much later in Catholicism's liturgical and architectural history. 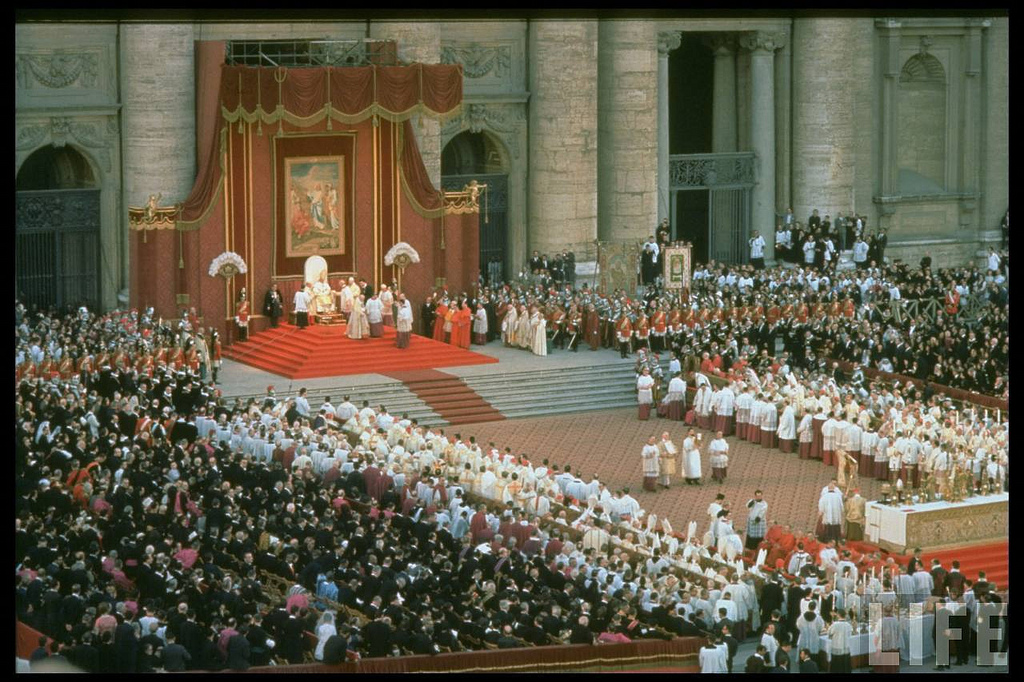 Yes, it is Paul VI and this is another view: 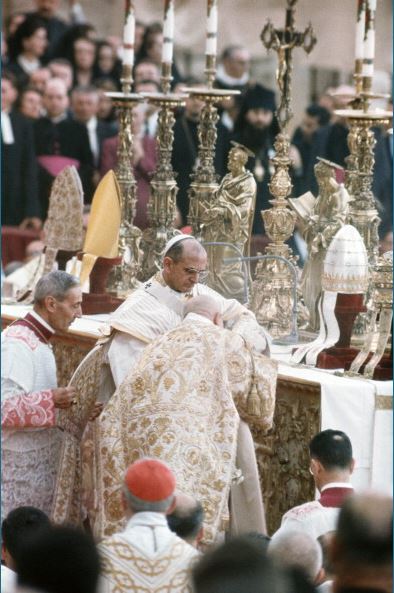 The photo is the coronation of Pope (Saint) Paul VI which took place on 30th June, 1963.

The photo is of the coronation of Pope (Saint) Paul VI which took place on 30th June, 1963.

Right before he wrecked the Liturgy!

In 1963 the whole coronation ceremony, including the papal Mass, had to be held outdoors since St Peter's Basilica was set up for the sessions of the Vatican Council. So the arrangement in St Peter's Square was a novel one. Paul's successors continued the practice of holding the installation ceremony in the Square, as well as certain other papal Masses, e.g. on Easter Sunday.

The present arrangement of throne and altar follows that of 1963 and is hardly ancient. The actual crowning of Pius IX, Pius XII and John XXIII took place on the balcony of St Peter's; Pius XI was crowned inside the basilica; and both Leo XIII and Benedict XVI were crowned in the Sistine Chapel.

The orientation of the altar in St Peter's Square simply replicates what happens inside the basilica.

It will depress Kavanaugh to know that when I attended the EF this morning at an Hispanic/Anglo parish, that I was one of the few grey hairs there. The vast majority were young people with young children and some of them made their First Holy Communion and were invested in the scapular. My territorial parish last week's OF at the same time had virtually no children present even though they have a parish grade school. Even my wife agreed, who is not as committed to the EF as I am, acknowledged that things don't look good for the OF on a long term basis.