CAN YOU IMAGINE HOW MUCH MONEY MCDONALDS AND OTHERS WHO HAVE OUTLETS IN THE FOOD COURTS WILL MAKE IN THE MERCEDES BENZ ARENA IN ATLANTA WHERE SUPERBOWL SUNDAY WILL HAPPEN? 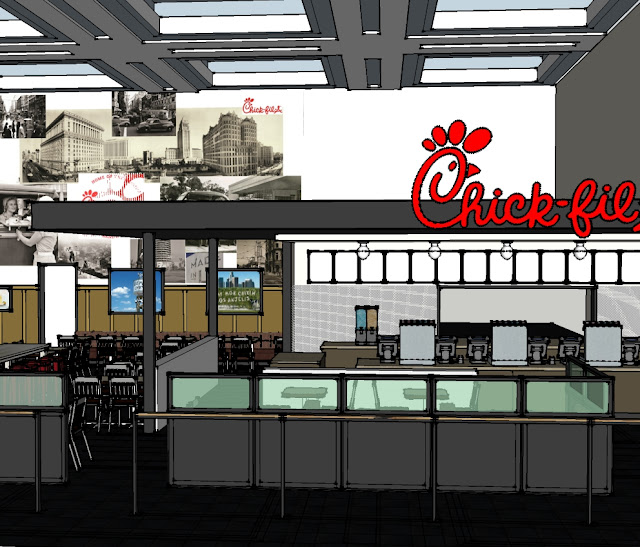 Chic-Fil-A, that great  Georgian fast food restaurant, was founded by a staunchly Christian man who mandated that his stores remain closed on Sundays. Chic-fil-a only serves on Sundays when there is a disaster of some kind.

Thus, the Chic-fil-a at the Mercedes Benz Arena's food court will not be opened for the Super Bowl! Can you imagine how much money they would have made if they did open and not just at the arena but all over the country just for Super Bowl Sunday?

My prayer is that Catholics in business and politics would take their faith as seriously as the founder of Chic-fil-a.

I wish Catholic business owners close their doors on Sundays too.

I wish Catholic politicians would take their faith as seriously as the Chic-fil-a founder and uphold the dignity of every human person from the moment of conception through natural death.

Wouldn't it be a wonderful Catholic witness in New York State if Governor Cuomo would not have prostituted himself to the liberal northeast  elite establishments and political ideologies and refused to be pro-abortion regardless if it meant the end of his political career. A Catholic, who claims to be Catholic just signed the most liberal bill that the Democrat party wants nationwide that allows the murder of children even to the last day of a mother being full term. Despicable to say the least. As bad as the sex abuse scandal is, Governor Cuomo's signature deserves not only the wrath of the Magisterium of the Church but of Almighty God. But Cuomo fears not being reelected more than he fears God. Thank you Vatican II!

I have to agree with Cardinal Dolan, for a Catholic to espouse even being a democrat puts him on shaky moral ground. Just like abusing priests who did good in all other areas, a Catholic can no longer claim that just because the Democrat party does some good, they can in good conscience be a democrat. Otherwise we'd have to give abusing priests a pass too, as they were given in the past!

And wouldn't it be great if Pope Francis, despite its political incorrectness and because Governor Cuomo has used Pope Francis' for his political advantage, excommunicated the Governor of New York himself. There are precedences for a pope doing so when the moral stakes are so high.

Catholicism is full of Judases are we?
Posted by Fr. Allan J. McDonald at Thursday, January 24, 2019

"I am ashamed that the actions of Kentucky Catholic high school students have become a contradiction of the very reverence for human life that the march is supposed to manifest."

Even after all the evidence points to an activist seeing the hats and inserting himself for a photo-op.

Well, I am ashamed to be Catholic. I am done.

Sounds like Bishop Stowe is a dim bulb, likely a Democrat

Well, it is New York...the state that voted for Dukakis, Clinton, Gore, Kerry, Obama and Clinton...do we really expect anything but ultra-left social policies to come from that state? Or California for that matter? Or New Jersey? Vermont?

That is a sample of what would come if (hopefully) Roe is gutted (as it should be, as there was zero constitutional warrant for it). You would see a state by state battle, resulting in a resolution satisfactory to neither side---abortion would be pretty much allowed under any circumstances in some states and mostly or completely banned in others. Georgia would be an interesting battle---the metro Atlanta area, home to nearly 60 percent of the state's voters, favors the Democrats these days and is much more liberal than the other 40 percent of Georgia that mostly voted for Kemp for governor (who has vowed to sign legislation banning abortion at 15 weeks).

Bishop John Stowe is a Modernist who believes that his episcopal vow to uphold the Faith means that he “promised to uphold the teachings of the Church as they are now.” This is a bishop who believes that Catholics must affirm that even the prohibition on homosexuality may not be "immune from ever changing.” If you believe Holy Scripture definitely condemns homosexuality, you interpret God's Word incorrectly, for Bishop John Stowe believes, "the Scriptures don’t give us absolute certainty, they don’t give us black and white descriptions for many of the [moral] areas that we address." All of this was stated by the Bishop of Lexington, KY in his interview with Mike Allen of the Diocese of Lexington, KY on December 15, 2016 and was reported by Lifesite News (https://www.lifesitenews.com/news/new-u.s.-bishop-defends-speaking-engagement-with-pro-gay-group-condemned-by). In short, do not be surprised that Bishop Stowe takes the side of radical progressives. He does not profess the Catholic Faith in its integrity. Once your Faith is lacking, where else to go is there, but to the world and its activism?

The sad thing, is that I have NEVER heard this statement made by Cardinal Dolan. Maybe he needs to go around the media and twitter it out. Media and Dem heads (but I repeat myself) would explode because then some pious Catholic ladies and gentlemen who historically vote Dem might examine their consciences and change their voting patterns. It would also reflect badly on faithless bishops and priests.

I sent Stowe Father Rutler’s statement. I doubt he will see himself

My avocation is bicycle riding. The bike shop I frequent is run by a Christian (but I don't think he's Catholic) who has never been open on Sunday. For this I applaud him. Unfortunately he's likely to be retiring this year.

Dan Cathy, CEO of Chik-fil-A, is worth $5.9 billion. Keeping his stores closed on Sundays isn't much of a sacrifice.

Were they open, employees who make $10.47 an hour and who might choose to work on Sundays, might have a little more money in their pockets to help care for themselves and their families.

Interesting logic, of course these employees can work at McDonald's on Sunday part time.
But that begs the answer to your question, when is it okay for a business man to flaunt the 3rd commandment about keeping holy the Lord's Day?

And full time employees are guaranteed Sunday off, no matter what.

And what about the prostitute who wants Sunday off but her boss says you have to work and you get time and half to help with your expenses? Is that okay?

Well, come up to Atlanta, and you will see big crowds at the malls on Sunday (which at least are closed in the morning, when most churches have their worship services). Heathens running loose? I'm fine if folks want to close Saturday (which was the "Sabbath" in the time of the 10 Commandments), but LOL getting that to happen, especially during college football season in the South!

Is running a business on Sunday a de facto violation of the Third Commandment? No.

"And full time employees are guaranteed Sunday off, no matter what."

Not if they are Chik-fil-A employees. ALL of them, part of full time, are off on Sundays.

Your last comment about Sabbath work is, in itself, silly. It is predicated on the false assumption that prostitution is "okay." Since it is not okay, the question is invalid.

A mortal sin is a mortal sin. Breaking the 3rd commandment as interpreted by the Church, by the way, which now refers to the "Lord's Day, the First Day of the Week and the Christian Sabbath" is less serious than breaking the 6th Commandment?

I liked it better when the only things open on Sunday were churches, hospitals, fire houses, and the police dept. We were not allowed to hunt on Sunday, and most people would not even fish on Sunday. Daddy would not even cut grass on Sunday. We were all better off then.

Isn't the owner allowed to do whatever the hell he wants? Including smirking at someone Anonymous....

Opening one's place of business on a Sunday is no sin, venial or mortal.

When you want to have a mature discussion of the matter, let us know, eh?

Me thinks you protest too much, guilty conscience? or coloring book Catholic?

Not a sin!!!?? Then what shall I do with all these stones I've gathered?

So, you HATE and DESPISE the BALTIMORE CATECHISM now?

A. Servile works are those which require labor rather of body than of mind.

Q. 1254. From what do servile works derive their name?

A. Servile works derive their name from the fact that such works were formerly done by slaves. Therefore, reading, writing, studying and, in general, all works that slaves did not perform are not considered servile works.

A. Servile works are lawful on Sundays when the honor of God, the good of our neighbor, or necessity requires them.

See that? Servile woks are LAWFUL when the honor of God, the good of our neighbor, or necessity requires them.

Fr Hardon: "So first, non-servile work when the spirit is more involved than the body, has never been forbidden by the Church. And secondly, even servile work, not merely tolerated but permitted, even praised by the Church if it is either necessary or done out of charity. And Christ as we said before, dramatized what He was doing by performing works of charity by healing the sick or the paralytics on the Sabbath."

And to round it out, Canon law says: "On Sundays and other holy days of obligation, the faithful are obliged to participate in the Mass. Moreover, they are to abstain from those works and affairs which hinder the worship to be rendered to God, the joy proper to the Lord’s day, or the suitable relaxation of mind and body [CIC(1983) can. 1247].

So you are saying that the Cathy family is not in compliance with honoring the Lord's Day and should open their stores for the reasons you quote from the Catechism? Balderdash!
But again, me think thou protests too much but why I do not know but you do, don't you?

Anonymous you just like to fight. I for one never claimed it was a sin, or not a sin, to work on Sunday. You however, tried to make the "mature" argument that being open on Sunday might provide a few more dollars in employees pockets. I guess that means you think businesses should be open 24 hours a day. And if you give business owners the option of closing at times, what is your problem with Chik-Fil-A exactly?

"So you are saying that the Cathy family is not in compliance with honoring the Lord's Day and should open their stores for the reasons you quote from the Catechism?"

"I for one never claimed it was a sin, or not a sin, to work on Sunday."

I never said you did. And the owner is free to do what he likes. He/she can open for 2 minutes a day if he/she so chooses. I have no beef with Chik-fil-A whatsoever. The lionization of the owner's choice and the demonization of those who open their businesses on Sundays - "Judases" - is where I take exception to the blog owner's thinking.

Gene, I assume you have no issue with Jewish-owned businesses being open on Sundays, as their Sabbath is on Saturday.

Work should not interfere with our Sunday worship, but in today's world, it is not practical for only the "essential" services (police and fire, hospitals) to be open on Sundays. Freight has to move on a daily basis--- a freight train going from Chicago to LA for instance---2200 miles---can't just stop along the way if it happens to be a Sunday, especially when it comes to perishable items. Grocery stores follow the same logic---closing on Sunday and that is one less day to sell perishable products such as milk, juice and meat. The lodging industry can't just close for the day either, certainly not the convention business here in Atlanta.

Anonymous Kavanaugh is Cuomo on steroids!