I'VE SAID IT BEFORE AND I'LL WRITE IT AGAIN! THE VICTORY IS MINE ON WHEN ORDINARY TIME BEGINS! GOD IS GOOD IN HIS VINDICATIONS! SO IS THE CHURCH'S ORDINARY FORM ROMAN MISSAL!

Certainly I am above gloating, but.....

WHAT FURTHER NEED OF WITNESSES YOU OF CORRUPT INTERPRETATIONS?  AND IT IS RUBRICAL RED WHICH CONFIRMS ITS VERACITY!

THE LECTIONARY AND ROMAN MISSAL AS IN ALL THINGS ORDINARY FORM ARE CRYSTAL CLEAR THAT I AM RIGHT! PRAISE GOD FROM WHOM ALL CLARITY COMES! 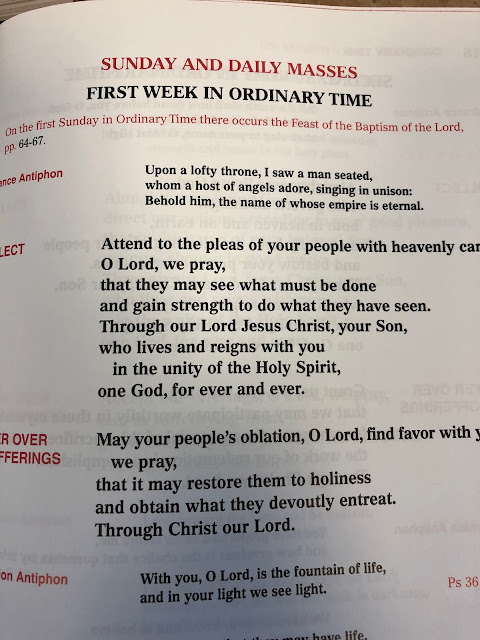 DOES ANYONE REALLY THINK I WOULD NOT HAVE THE 2002 TYPICAL EDITION OF THE ROMAN MISSAL IN LATIN?????????

THIS IS THE SAME PAGE AS ABOVE BUT IN THE OFFICIAL LATIN. PLEASE NOTE, HENRY IN PARTICULAR, THE RUBRICAL RED THAT IS UNDERNEATH WHAT IS ABOVE IN ENGLISH! 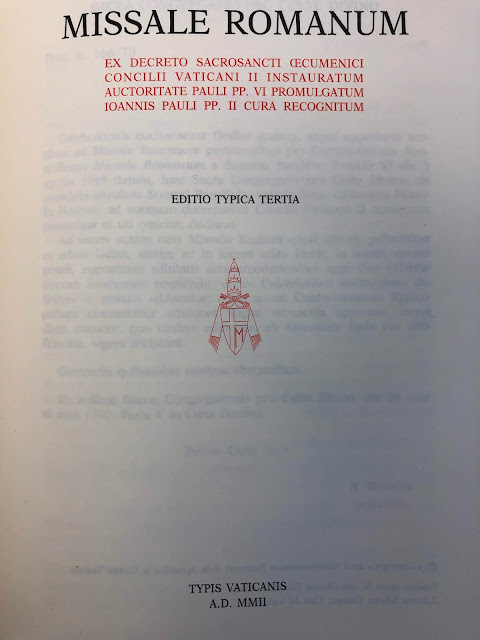 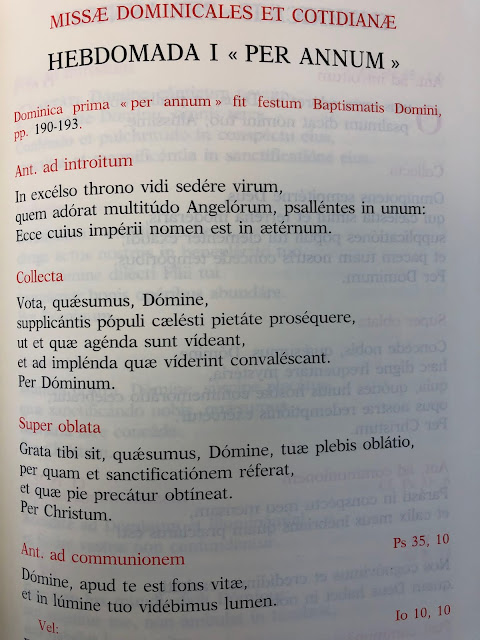 It's not that I really care whether it counts as part of Ordinary Time, or the Christmas season -- I don't. But surely you will concede that the Church's account of it is a mess.

You've provided most of the evidence already; but then there is the conflicting evidence, others have cited (including me). The only way to "reconcile" it is perhaps to say that the Church, in her breezy lack of concern for strict consistency at times, treats it as both part of Christmas season, and the first Sunday in Ordinary Time. If that bothers someone, oh well.

At any rate, thanks for making me laugh this morning.

Thank you Father Fox! I think it goes to show that those who contrived the "new and improved" Roman Calendar and those who interpret its lack of clarity all suffer from multiple personality disorders!

Here’s another way—and the correct way, I believe-- to “reconcile” the misleading or ambiguous rubric in your unofficial English-language altar missal (which inserts language not contained in the official Latin Missale Romanum of which it is allegedly a translation).

in Latin. In the introductory section

we find the definitive paragraph

Translation: Ordinary time begins on the Monday (feria II) which follows the Sunday occurring after January 6.

Thus the first day of ordinary time this year was MONDAY, JANUARY 14, 2019.

Finally, the heading for the Baptism of the Lord in the Latin 3rd typical edition of the Missale Romanum is

No reference to any “first Sunday in ordinary time”. Any such reference in an unofficial altar missal published in English is, therefore, an inaccurate interpolation. Though its apparent intent would be to signal that the following weekdays are those of the first week in ordinary time.

Terming it "Henry's deception" is a bit much, don't you think? That's the kind of statement I would except from PraySniff, not you. Based on the official Latin text, it seems Henry has the better argument. Maybe the folks who publish the English translations of the Latin texts should take a refresher course in the Church's official language.

Henry, WRONG! please note my update with proof in the original post!

O TJM, you poor soul, go back and look at the Typical Edition of the Latin Ordinary Form Missal which I purchased at the Vatican, btw! I added photos for proof! The victory in mine in Latin too, official Lain, the Church's official language as you correctly state!

Fr Louis Bouyer who was involved with the Consilium in charge of the liturgical reforms after Vatican 2, mentioned in his Memoirs that the new liturgical calendar was fabricated by a trio of maniacs, that the reforms were being rushed through without much thought, that the Consilium was full of fanatics who randomly and wildly archaeologised even wanting to eliminate the Sanctus, and that Bugnini in charge of the Consilium was an uncultivated scoundrel who lacked basic honesty. Were it not for Paul VI ordering the use of the Novus Ordo, it would have been send back to the manufacturer for refurbishing or replacement within a year of usage.

Except the Liturgia Horarum also states that “Post festum Baptismatis Domini incipit tempus per annum.” So, taking all of the evidence together with tradition, the Baptism of the Lord (a part of Christmas Season) takes the place of the First Sunday of Ordinary Time. Ordinary Time starts then on Monday. You’re both correct.


What has been demonstrated here is not liturgical calendarean certitude, but rather confusion over what one would some posit is a matter of self-evidence, lending itself to apothegmatic accord. Not surprising, given the system we in the United States of transferring feast days.

This debate shows that the OF is a mess. This NEVER happened during the time the EF held sway

What a spectacle this is becoming as I overserve things from the Eastern side of the street.

In peace let us pray to the Lord, folks.

We should be learning, teaching and helping those along who might not see. Keeping score isn't productive in the end, particularly in light of the mess that surrounds those of us who are members of the Church.

No one disputes that the liturgy of the Baptism is celebrated on the Sunday after Epiphany. And this being the first day of the first week of Ordinary time, it plays the role of the "first Sunday of Ordinary Time", in that a liturgical week is controlled and designated by its Sunday.

Nevertheless, Sunday January 13 was NOT itself a day in Ordinary Time, since the Missale Romanum explicitly defines Monday of this week as the actual first day of Ordinary Time.

Therefore, I triumphantly declare myself the final WINNER, and you the LOSER in this monumental matter of such critical importance to salvation history.

Henry is right. Each week is associated with the Sunday that starts it, and so this past Sunday is the proper Sunday of this First Week "per annum". And Monday was the first day per annum.

This as a time of profound contradiction. The Church requires pastors to teach the faithful the Latin Mass parts, and no pastors do this. The Church requires Gregorian Chant to be the primary liturgical music, and it is not. Vatican II prohibited changes to the Mass not required for lay participation, and yet Paul VI made many changes that don't pertain to laymen. Bishops are spiritual fathers to the faithful, but behave like perverted uncles. Et cetera.

"Therefore, I triumphantly declare myself the final WINNER, and you the LOSER in this monumental matter of such critical importance to salvation history."

Winner you are, and your perspicacious insight and analysis is thoroughly reassuring.

To divide the liturgical year into 'seasons' (tempora) is convenient and customary, but is it strictly liturgical? If I wish to regard Christmastide as lasting until Candlemas, this is not affected by the fact that it is preceded by two 'green' Sundays 'post Epiphaniam'.

Perhaps some Catholics find their liturgy morally edifying. However, the present liturgy can have no transformative effect on the soul, none whatsoever, which is to say that it is completely devoid of grace. Try hard this Lent to consider whether you really think it beneficial to make your Easter duty. And if not seek communion in the Russian Orthodox Church Outside Russia. If not, stay in communion with the present Roman Pontiff and see where it gets you. Obviously all of this back and forth is a waste of ernergy that could be spent effecting that self-emptying which St. Paul enjoins us to do in a hymn sung in the early Church. (Philippians 2:5ff.) Ask yourself, if the stupid hymns that have replaced the old missal propers have the same level of theological content. I'll assure they do not. Father Bouyer told the truth in his memoires. Dom Botte OSB who was his colleague affirmed the same thing to me circa 1976. Catholics the church militant of today is a complete hoax. How much time is the hiearchy spending on discussing matters which pertain to the reproductive cycle that lasts from puberty to menopause. Christ brought us the therapy to end death. In fact he destroyed it, meaning that the hierarchy should be concerned with our eternal life. The Roman Catholic Church under Pope Francis has become a byword of folly in all Christendom. Those shoes you're wearing are made for walking and this is what you gotta do. Walk right out!

I wish we had stuck with Candlemas rather than Paul VI's blah, grey, soul-less calendar created by Catholicism haters.

I chalk the whole thing up to the mistake of going metric.

And, abandoning chalk for dry-erase.