See the “bread” on this table? It is the type seminarians made for almost every Mass I went to at my 1970’s seminary “consecrated” on a box like “altar-table” covered like the one below. Our “bread” cut into cubes, was dark brown and had honey and other ingredients in it which more than likely invalidated the consecration and thus rendered the sacrificial aspect of the meal invalid. All that the liturgy was, was a meal with what seminarians called “chewy Jesus.”

No, it wasn’t, chewy Jesus, and it wasn’t really chewy bread, it was more like a chewy Honey Bun.

Deacon Fritz has a good article on the actual “Bread” of the Holy Sacrifice of the Mass at Praytell. You can read it HERE, but please look at the stupid 1970’s comments below the post. These are the corrupt examples of the 1970’s that invalidated so many “Masses” and made them into Honey Bun sharing more important to the corrupt liturgists than receiving “The Bread of Life, Jesus!” 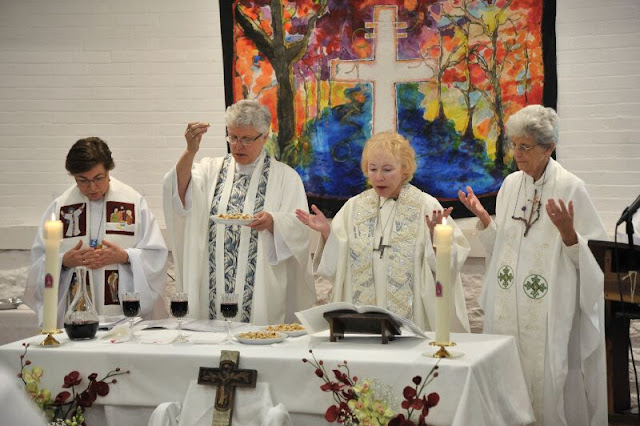 The celebrant looks like Everybody loves Raymond ‘s mother! Who knew?

I think they are all women unless one or two have declared themselves as genderless.

And afraid. Kavanaugh could only dream of a full head of hair like that!

I attended a wedding at a large and beautiful Presbyterian church. The building would be a dream for many perennial (traditionalist) Catholics. The service was conducted by a group of several female clergy. The presider had a nice looking large, round, loaf with a spongy interior and extra crispy crust that was held aloft and broken dramatically during their eucharistic sequence. As everyone began to stand and process for communion my wife looked at me with terror in her eyes and asked what should we do?? She was thinking we should flee since we would clearly be outed as rude arrogant papists. Of course nothing was said.

FWIW, that Presbyterian congregation has a spectacular choir known for the high quality performance of a demanding classical repertoire. A friend of mine, whose daughter was married during that ceremony, is a tenor in that choir and also very respectful of Catholicism. I think that stems from his respect for our schola gained from the public performances that he has attended.

This comment is directed to the question in your masthead of this date, "off-putting or worth restoring?". It might be that some ancient practices died out for a reason. Wearing bullseye vestments, for example.

I never colored my hair in order to hide my aging, though people tell me some priests have done so.

And the gradual migration of my hair to the floor, the shower drain, and other locations not including my scalp doesn't worry me in the least.

The one cleric does resemble Doris Roberts!

I think Bishop Lessard and Msgr. John Cuddy colored their hair, but who am I to judge, to each his own. I know of one diocesan priest who wore a rug on his head with the non skid mat under it for the longest time evrrrrrr....

The reason I know about the non-skit mat is that you could see it peeking through but I digress.

Only their hair dressers know for sure and of course there is the seal of confession for them. My Italian hairdresser died six years ago so she's not telling either.