THE VICTORY IS MINE! COMMON CHALICE AND HANDSHAKE OF PEACE HAVE THE POTENTIAL TO BE DEADLY! 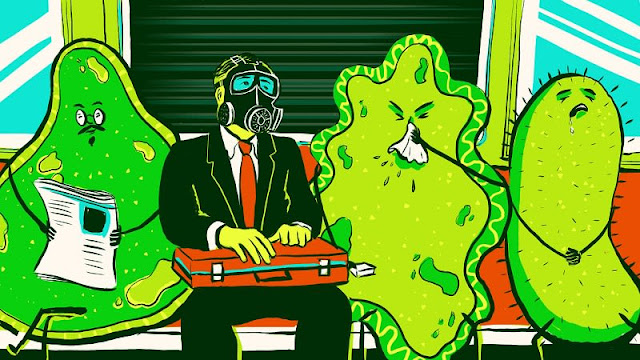 I suspect when lawsuits are brought against the Church for these two practices, these will be permanently banned! Why does it take law suits for bishops to act?

Church officials in New Mexico and Pennsylvania say parishioners should get less personal to avoid getting sick.

"Bless you, but keep your hands to yourself."
That's the message some Catholic parishioners are getting from officials hoping to curb the spread of the flu.

In New Mexico, the Archdiocese of Santa Fe said Monday that parishioners should limit touching during Mass, including by not holding hands during prayer and simply nodding during the sign of peace instead of shaking hands or hugging.

Only the consecrated bread will be administered during the sacrament of Holy Communion, the archdiocese said. It also encouraged anyone who is experiencing symptoms such as sneezing or coughing to watch a televised Sunday Mass from the comfort of home.

"It is not a sin to miss Mass on Sundays if you are ill," the archdiocese said in a statement. "These directives will be revoked when the situation improves."
The guidance comes in light of widespread influenza activity in New Mexico, according to the Centers for Disease Control and Prevention. As of late December, the New Mexico Department of Health had reported four adult deaths connected to the flu so far this season.

Church advice and directives affecting the faithful haven't been limited to this flu season alone, nor to New Mexico. In another state also listed as having widespread flu activity by the CDC, the Diocese of Allentown in Pennsylvania said the exchange of the sign of peace and the option of drinking wine from the chalice during Holy Communion would be suspended in its 84 parishes.

"This suspension will begin with the Vigil and Sunday Masses the weekend of January 12-13, and will be in effect until the incidence of influenza subsides in our region," a statement from the diocese said.

The Morning Call reports that Pennsylvania had experienced 9,268 laboratory-confirmed influenza cases since October in 66 of its 67 counties, including 10 adult deaths.

Up to 7.3 million Americans have been sickened with the flu so far this season, according to the latest CDC estimates.
Posted by Fr. Allan J. McDonald at Tuesday, January 15, 2019

"In summary, the risk for an infections disease transmission by a common cup is very low and appropriate safeguards - that is, wiping the interior and exterior rim between communicants, use of care to rotate the cloth during use, and use of clean cloth for each service - would further diminish this risk. In addition churches may wish to consider advising their congregations that sharing the communion cup is discouraged if a person has an active respiratory infection (ie, cold or flu) or moist or open sores on their lips (ie, herpes)."

Your data is outdated and quite wrong and opens you up to a lawsuit when one of your parishioners dies of the common chalice. There isn't enough alcohol in the wine we use and it is diluted by saliva after each person drinks. The germ thingy with wiping the rim only applies to sterling sliver or 18 carrot gold, not what most parishes use for the common chalice, especially if pewter.

The greatest problems are for those who drink the dregs or God forbid do the ablutions the traditional way. Many have had near fatal intestinal infections to include a deacon I know who is also a GI doctor and confirms my worst fears as well as myself as I got an intestinal germ on my way to Italy two years ago from the ablutions. It could have killed me! Almost caused an international flight from Rome to here as it was taxiing to turn back and let me off! The whole plane could have sued the Diocese and Rome too!

And next up... the gluten hysteria...

Common sense should tell everybody (except Kavanaugh) that it is not. good idea to eat or drink after other people, especially strangers. I hope your Mamas taugh tyou that. Even in our family, we never drank after each other. There is always some risk, however diminished by inadequate efforts to reduce it. Why take the chance. Besides, the practice seems very unappealing.

But then you don't need the Barnum and Bailey Eucharistic Ministers circus!!! Ideology Uber Alles!

"Your data is outdated and quite wrong and opens you up to a lawsuit when one of your parishioners dies of the common chalice.'

The item I cited is from the American Journal of Infection Control, October 1998, Vol 26, No 5.

The age of the information does not change the facts regarding the minimal danger of the use of a common communion cup.

If there was a reasonable concern for liability, I am sure that the bishop's attorneys would have, long ago, advised him to ban the use of the common cup. Inasmuch as they have not done so, your assertion is hyperbole.

"Many have had near fatal intestinal infections..." How many and where are these "near fatal" infections reported?

"I got an intestinal germ on my way to Italy two years ago from the ablutions..." You have had chronic bowel problems for years. Where is the evidence that you got a germ and that you got it from ablutions?

("Also, the case of someone who says they picked up an infection from the common cup is really of no value, as evidence, because, as we have seen, they are more likely to have got the infection by some other means." - Dr. Greg Kenyon, "The Common Cup and the Common Cold," http://spindleworks.com/library/kenyon/comonCup.html

"Finally, in 1998 the CDC reported there had never been an outbreak of infection related to the communion cup. They referenced a study from 1997 in which 681 participants who drank daily from a common cup were at no higher risk of infection than those who participated less frequently or who completely abstained from Christian services. They concluded that it is probably safe to participate in services where a common cup is used, with the caveat that any member of the congregation with active respiratory illness or open labial or mouth sores abstain from partaking. In conclusion, there is experimental evidence suggesting that sharing a communion cup contaminates the wine and cup. However, there has never been a documented case of illness caused by sharing a chalice reported in the literature."
- International Journal of Infectious Diseases, November 2013, Vol 17, No, 11 "Infections Associated With Religious Rituals

Sheesh! I’ve said this before here (every year at this time) but I’ll say it again: alcohol in any strength DOES NOT KILL VIRUS contaminants. Bleach in a 1:10 ratio will kill viruses. I retired from an Infectious Disease service at a medical college, but if you don’t believe me, call the service or the CDC.
The mechanical action of proper hand washing is what is recommended to remove viruses from hands. If you use alcohol sanitizer, it will be the mechanical action of wiping your hands that will remove viruses.

Thank you for correcting FRMJK and his false biology and science 🧪science.

Well, I'll keep taking my chances at 30327----hopefully most parishioners would use common sense about coming to Mass and/or consuming from the chalice if sick.

G.1. Alcohol
Alcohol is effective against influenza virus (252). Ethyl alcohol (70%) is a powerful broad-spectrum germicide and is considered generally superior to isopropyl alcohol. Alcohol is often used to disinfect small surfaces (e.g. rubber stoppers of multiple-dose medication vials, and thermometers) and occasionally external surfaces of equipment (e.g. stethoscopes and ventilators). Since alcohol is flammable, limit its use as a surface disinfectant to small surface-areas and use it in well-ventilated spaces only. Prolonged and repeated use of alcohol as a disinfectant can also cause discoloration, swelling, hardening and cracking of rubber and certain plastics.

Advantages of using alcohol as a disinfectant:

I wonder if those who worry about germs at mass also consider bringing disposable gloves and saniwipes with them to the grocery stores. Hundreds of unwashed hands have been touching the cart handles. Public restrooms must be purgatory.

Perhaps individually wrapped hosts and a kind of squirt gun wine dispenser would solve the problem. We must not allow the pews to be emptied any further.

But no one has mentioned intinction by a priest..

Two words: Public Toilets. There is usually plenty of alcohol around them and I still wouldn’t drink in one.

Anonymous "The Student of Science" Kavanaugh is on a tear. LOL, clericalism on steroids

I think the Barnum and Bailey Eucharistic Ministers Circus has done their fair share in emptying the pews, along with the priests who LOVE them.

Alcohol’s “germicidal” use is effective against bacteria, not viruses. Tuberculosis is a mycobacterium. Look it up.

The hand, ( hand to hand or hand-to-surface) is one of the leading vectors of disease transmission. So it is the person receiving, taking and holding the chalice, that is as much or more of a problem than the lip of the chalice.
This is why you see hand sanitizer dispensers prevalent throughout health care facilities. These, by the way, dispense gel or foam which contain more than just alcohol.

Advantages of using alcohol as a disinfectant:

Medieval surgeons (who gained their experience on the battlefield) used wine as an antiseptic; they knew nothing of bacteriology, of course.

I would imagine that surgical spirit at 70% is a powerful disinfectant, and whisky or brandy at 40% might help. Table wine, however, has an alcohol content of only 10-15% so its effects would be limited in any case.

The main problem with offering the chalice to the laity is that it is impossible to consecrate the exact amount required, and unlike the Host, it cannot be reserved. Ten years ago I used to attend Mass at Nottingham Cathedral where the chalice was offered. The take-up was about thirty per cent (traditionally-minded Catholics and those from non-European cultures didn't take it). What was left was consumed by the extraordinary ministers (they may do this, although they may not purify the vessels).

I suspected that some of the poor dears might have been over the drink-drive limit on the way home. And I doubt that an English court would accept transubstantiation as a defence.

We offer communion under both species at all masses in this parish, excluding our school masses. It is not difficult to determine the amount of wine needed, and at 99% of the celebrations the cups are emptied of the Precious Blood very close to the end of the lines.

When some of the precious blood is not consumed by the congregation, the remaining amount is, I would say, never more than a small swallow. It is unlikely that consuming that amount would put the communion minister in danger of being over the legal limit hereabouts.

At the ordination of our former bishop in 1995, there was, as I recall, far more wine consecrated than was needed. The chalices were being passed among the gathered clergy to be consumed. Not a few had to decline on the second or third pass!

That's too bad that you do this. Time consuming and a health risk but I understand your desperate need to have a pack of "Eucharistic Ministers" up there with you a la Barnum and Bailey. Too bad the practice has not resulted in Catholics having a deeper appreciation for the Real Presence aka Transubstantiation.

Heck TJM, the "POPE" doesn't have an appreciation for the real presence - thus the reason he doesn't kneel... why do expect the rest to care?