NO APPLAUSE FOR ARCHBISHOP NAUMANN'S HOMILY AT THE NATIONAL BASILICA OF THE SHRINE OF THE IMMACULATE CONCEPTION IN WASHINGTON, DC LAST NIGHT WHEN NORMALLY THERE WOULD BE OVERFLOWING CHEERS! ISN'T IT GOOD TO RECOVER THE SOBRIETY AND REVERENCE OF THE PRE-VATICAN II MASS IN THIS REGARD AND ISN'T IT A BLESSING THAT THERE WASN'T CHEERING AND APPLAUSE? 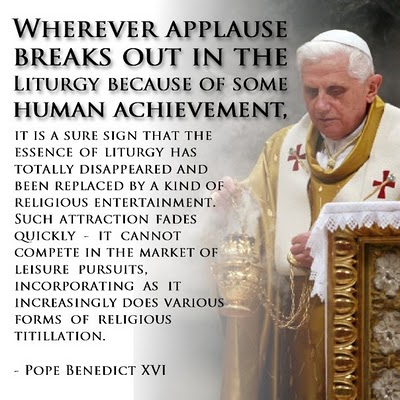 At the end of this excerpt from Rocco Palma, he states that there was a complete lack of applause for Archbishop Naumann's homily at the Basilica in Washington last night whereas in the past there were overflowing cheers.

If anything good can come out of the Magisterium's meltdown in this country, a lack of applause at Mass during a homily is the best thing ever!!

Rocco Palma at Whisper in the Loggia writes:


In a normal year, the March for Life – beginning with its jammed vigil in the Basilica of the National Shrine of the Immaculate Conception – attracts somewhere around 100 US bishops.

Again underscoring the state of things this time, tonight's opening Mass barely managed to draw 40 of them... and instead of the standard six or so cardinals on hand, tonight saw all of two (with Wuerl and Cardinal Timothy Dolan – currently facing his own heat over a recent case in New York – both conspicuous by their absence).

To be sure, some of the depressed turnout can likely be attributed to an intense round of winter storms running cross-country. But not a drop like this.

All told, it should be a hale season for the Catholic movement against abortion – 46 years since Roe, a Republican administration whose premium on the unborn is matched only by its targeting of immigrants has just placed a second justice on the Supreme Court, while a mix of freshly-enacted state laws and evolving public attitudes have brought the number of procedures to a historic low: for the first time, even fewer than took place in 1973 itself.

Nonetheless, the shadow of the scandals could clearly be felt looming over a traditionally exuberant occasion. In his first turn at a homily that, by long practice, doubles as a "State of the Movement" address, the new USCCB Pro-Life chair, Archbishop Joseph Naumann of Kansas City in Kansas, had little choice but to note that "the failure to respond effectively to the abuse crisis undermines every other ministry of the church."

The sense was further punctuated by the complete lack of applause during a preach that usually overflows with cheers.

An especially devout veteran of the movement who won the bench's most prominent policy role with an unprecedented defeat of a cardinal – and the US' first Pro-Life Czar who's publicly denied the Eucharist to politicians who support legal abortion – here's Naumann's homily in full: (AND

I PROPOSE THAT ARCHBISHOP NAUMANN BE WASHINGTON'S NEXT ARCHBISHOP!!!!!!!!!

What lefty bilge from the insufferable Rocco:

"All told, it should be a hale season for the Catholic movement against abortion – 46 years since Roe, a Republican administration whose premium on the unborn is matched only by its targeting of immigrant"

We are not targeting immigrants but illegal aliens. This is getting tiresome. So Rocco is just another fake catholic conflating the intrinsic evil of abortion with not allowing illegal aliens to over-run our social services

Regarding the lack of cardinals and bishops at the March for Life Mass: I'm sure they don't want to be asked tough questions by the press, or even the lay people around them. I have to say, I think that is true to form. And it makes me rather doubt they would have gone into the Roman colosseum to face the lions rather than deny Jesus.

Hired hands. Leaving the sheep and taking off when the wolves appear in packs.

A long time ago I learned when judging someone's character, watch what they do, not what they say.

Watch what the cardinals and bishops DO in response to tough circumstances. It's very telling.

It was a good homily. Archbishop Naumann is a good man.

For all of you fake catholics who get their "news" from ABC, cBS, and NBC, chew on this:


On its 46th anniversary, all three major networks (ABC, NBC, and CBS) ignored the March for Life in Washington, D.C., the largest pro-life event in the nation, opting instead to cover the feminist Women´s March rally. According to LifeNews, despite an estimated 100,000 people being in attendance at the pro-life march along with President Trump´s address to the crowd via video, the left-wing machines could not so much as "give a passing mention to the March for Life" during the Friday morning shows."It seems an anti-Trump march happening tomorrow is more interesting to the networks," (Snip)The networks never learn it