THANK GOD FOR DABO SWEENY'S EVANGELICAL WITNESS TO HIS FAITH! MORE CATHOLICS, TO INCLUDE COACHES, NEED TO FOLLOW HIS EXAMPLE, POPE FRANCIS NOTWITHSTANDING 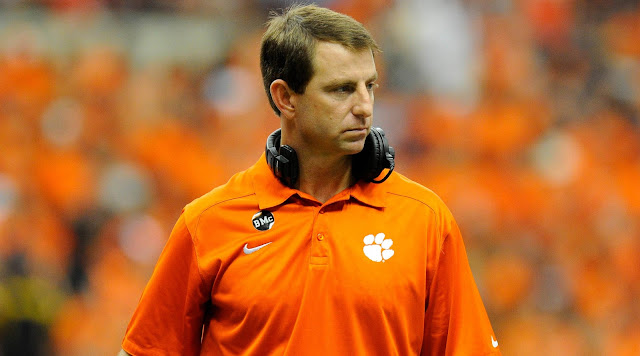 I am never really sure what Pope Francis means when he opposes proselytizing. I think it means doing what the Spanish did when they colonized South America. But there is a strong current in Evangelical Protestantism that I find very appealing and was being incorporated into Catholicism by people associated with the Evangelical Catholic movement under Pope Benedict. It is also strongly orthodox and traditional.

Dabo Sweeny, an Evangelical coach for Clemson who had a stunning victory over Notre Dame and then Alabama (both coaches there are Catholics) is quite the hero in these parts and I can see why.

We need people like him to influence our young, especially those in sports. Kudos to Coach Sweeney!

Gus Lloyd on Seize the Day on Catholic Radio just had a great call-in segment on Coach Sweeney and I am impressed. With a last name like that, there must be some Catholic roots!

'All the glory goes to the good Lord!'

Well I'm quite sure the pope is against proselytizing because all religions are the same in his mind.

When people think that God is "glorified" by a football game, we're in trouble.

One wonders, does Sweeny also "give God the glory" for losses? For CTE injuries to his players?

So, does God have a favorite in sporting events? And in the Clemson game, was God favoring Dabo, who is (probably) evanbgelical, over Nick (who I think is Catholic)?

You don't believe that God can allow one football team to trounce another for some divine mysterious purpose? tisk, tisk!

Apart from your heterodoxy there, don't you think that a Christian role model who inspires athletes to be more religious, to do service projects and to be the best person they can be as they strive to excel not only in sports but also in academics which is the reason they attend the University is not of God? tisk! tisk!

"The Church does not engage in proselytism.

"Instead, she grows by “attraction”: just as Christ “draws all to himself” by the power of his love, culminating in the sacrifice of the Cross, so the Church fulfils her mission to the extent that, in union with Christ, she accomplishes every one of her works in spiritual and practical imitation of the love of her Lord."

Uh, I don't think of myself as heterodox. I got to church every Sunday and never back liberal Democrats for office. Supported Brian Kemp for governor as I know you did. No issue at all with Dabo inspiring athletes to be more religious, but still not sure God had a favorite in that game. And I wish it were true that athletes were in college for academics, but I think we know otherwise in many instances given scandals over the years (and many college football players "going pro" after their third year, without graduating). Would be interesting to see the average GPA of those on the football team admitted to both schools versus the non-football or basketball students.

FWIW Clemson's Travis Etienne #9 did the sign of the cross after his three touchdowns.
The name Etienne is French for Stephen. Is he Catholic? My Magic 8 Ball says "All signs point to yes."

"...don't you think that a Christian role model who inspires athletes to be more religious, to do service projects and to be the best person they can be as they strive to excel not only in sports but also in academics which is the reason they attend the University is not of God?"

No. A "Christian role model" doesn't inspire people to believe that might makes right because, “My grace is sufficient for you, for my power is made perfect in weakness.” Therefore I will boast all the more gladly about my weaknesses, so that Christ’s power may rest on me. That is why, for Christ’s sake, I delight in weaknesses, in insults, in hardships, in persecutions, in difficulties. For when I am weak, then I am strong."

No. A Christian role model doesn't encourage young men to engage in unnecessary behavior that results in life-long brain damage. (147 college football programs had at least one former player diagnosed with CTE.)

No. Dabo has a base salary of $6 million and will receive $200,000 more for getting his team into the playoffs and $250,000 for winning the championship. Inspiring? No.

Don’t we glorify God, should, by all of our actions?

A @ 11:03 has to be Kavanaugh (who seems very concerned about injuries to football players but not the killing of the unborn in the womb).

Yep, Nick Saban is a Roman Catholic of Croatian heritage.

Father, A @11:03 hates football and has stated thus on his Facebook page. He has many followers there who are like-minded. So, no, he’s not a sore football game loser—I expect he could care less despite his Notre Dame affiliation. One only has to read his page postings to know that he’s a person who is attracted to the creative/artistic side of life, not the rough-and-tumble physicality of sports like football that many men enjoy. We (and he) should just be grateful that God did not choose him to serve in war-time military duty on the frontlines.

In life, we are all called differently. To each his own, I guess...

I've never said I hate football on my FaceBook page.

If grown men (and not a few women) want to spend hundreds of dollars and hours watching overpaid professional footballers bash each other on the gridiron, that's their choice. A sad one, in my estimation, but theirs nonetheless.

An average professional football game lasts 3 hours and 12 minutes. The time when the ball is in play averages a mere 11 minutes. I am left to wonder just what people find so appealing in being snookered into laying out hard earned dollars for such a measly return.

And whether one likes the "rough-and-tumble" of football or not, the dangers I noted are real.