WAS POPE FRANCIS REFERRING TO SOME CATHOLICS AND NON CATHOLICS IN MACON WHEN HE REFERRED TO PELAGIANISM HERESIES? I REPORT; YOU DECIDE! 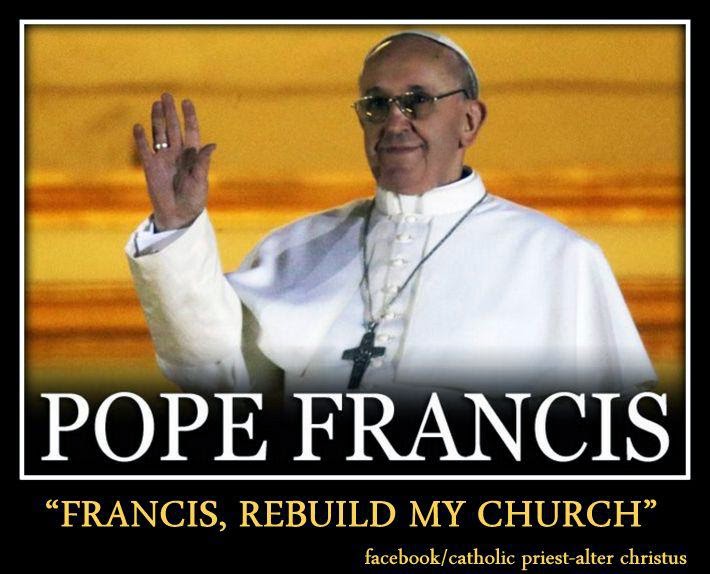 According to Pelagian heresy, original sin did not really contaminate human nature and so humans are apparently able to choose the path of goodness and avoid sin without the help of mercy. In recent decades some were averse to a return to Pelagianism because hyperactivism in the Church, trusting in human plans and projects and believing that human action is what makes the Church what it is, ends up nullifies the action of mercy and reduces everything to human ability.[Isn't this the heresy of some Catholics and non-Catholics as it regards the human sexuality? Do they not deny original sin and that all of us in one way or another are fallen and that we are oriented toward sin even in our passions? Thus ideologies develop and social change occurs that reduces everything to the human person and his accomplishments without the need of grace to overcome original sin or actual sin. It is a form of do-it-yourself salvation. If you are a good person, despite your peccadilloes, you can be saved by your goodness, you don't really need God's mercy. As long as you are good and act in good faith even in your sins, you will be saved.]

... It was the then cardinal Joseph Ratzinger himself who spoke about the “Pelagianism of the pious”. During the Spiritual Exercises of 1986 (in the book “Guardare Cristo: esempi di fede, speranza e carità” [Looking at Christ: Examples of faith, hope and charity]; published by Jaka Book), Ratzinger said: “the other face of the same vice is the Pelagianism of the pious. They do not want forgiveness and in general they do not want any real gift from God either. They just want to be in order. They don’t want hope they just want security. Their aim is to gain the right to salvation through a strict practice of religious exercises, through prayers and action. What they lack is humility which is essential in order to love; the humility to receive gifts not just because we deserve it or because of how we act…” [Here Cardinal Ratzinger is speaking of ultra-traditionalist Catholics, but there is a secular form of this that is more insidious and present in the Macon community. If a person is good, does his job and is nice, then he will be saved--no need for the Church's teaching on morality and the need to recognize sin for what it is and the need to convert by God's grace and through His mercy away from sin and seek God's forgiveness through repentance and a new way of life.Secular Pelagianism holds up sin as a good and rejects the need for change in a person but endorses that the society should accept not only the person but the sin--a reverse sort of conversion away from the Gospel and toward the secularism of our age.Enshrining an ideology against natural law, such as same sex marriage and calling it marriage equality is one such example of making a sin into a virtue and publicly so.]

My final comment: The dictatorship of secularism or relativism which we experience in our American culture today is another contrived religion of the state similar to communism and fascism. The politics of secularism becomes a dictatorship when God is manipulated as is religion to uphold the principles of secularism. Even Christian institutions have no right to uphold their teachings and demand that those they hire abide by them in the public forum and trusting in God's forgiveness in the private forum of seeking God's grace to repent and change one's life by relying on  God's grace and the means to God's grace that the Church reveals.

Here is another dictatorship of relativisim and falsehood. It has the support of Pope Francis and the Jesuits.

Cardinal Nicols and FIUV are telling a falsehood. Why do rank and file Catholics have to accept it?

Cardinal Vince Nicols the President of the Catholic Bishops Conference of England and Wales (CBCEW) and the officials of the Federation International Una Voce (FIUV) are telling a lie for political or personal reasons. Why do the rank and file Catholics have to accept it ? They have to accept a factual error because they have not learnt theology ?

James Bogle, the President and Joseph Shaw, theTreasurer of the FIUV are British.It is a falsehood for the FIUV and Cardinal Nicols to suggest that there are known, visible- in- the- flesh persons in 2014 , saved with 'a ray of the Truth' (Nostra Aetate 2, Vatican Council II ) and ' seeds of the Word'(Ad Gentes 7).

Joseph Shaw, the Chairman of the Latin Mass Society of England and Wales abets in this falsehood.He is not willing to say that every one needs to convert into the Catholic Church in the present times to avoid Hell and there are no known exceptions.He is a lecturer at Oxford and this would put him at odds with his colleagues and of course the Cardinal-president of the CBCEW.

So like Gavin D'Costa on the CBCEW video, for Joseph Shaw, Vatican Council II, Nostra Aeate 2 refers to the deceased in Heaven, visible on earth.The deceased-saved would have to be visible for them to be exceptions to all needing to convert in 2014.
For political reasons Cardinal Vincent Nicols recently permitted Catholic politicians who support same sex marriages to receive the Eucharist at Holy Mass in England.This is Sacrilegious Communion.He also expects lay Catholics to accept nonsense about the baptism of desire etc being exceptions to the traditional interpretation of the dogma extra ecclesiam nulla salus- as if these cases were visible to him on earth to be exceptions.How can they be exceptions to the traditional interpretation of the dogma by Fr.Leonard Feeney of Boston, when we cannot see any of these cases in the flesh ?

According to the CBCEW website Catholics are told to leave this 'theologial issue' to the 'experts' in inter religious dialogue. Gavin D'Costa a Catholic professor of theology at the University of Bristol, who claims he can see the deceased in England, is considered an 'expert'.He is a consultant with the CBCEW.

Traditionalists in England, including Joseph Shaw, who lectures on philosophical and other subjects , are going along with this misinformation.FIUV supports this misinformation about the Catholic Church. Lay Catholics who do not know theology have to swallow this objective error since the cardinal at Westminister wants them to do so. -Lionel Andrades

Foederatio Internationalis Una Voce official has nothing to say http://eucharistandmission.blogspot.it/2014/05/foederatio-internationalis-una-voce.html#links

Winter for the Catholic Faith in England http://eucharistandmission.blogspot.it/2014/05/winter-for-catholic-faith-in-england.html#links

If someone is saved with ' a ray of the Truth' (Nostra Aetate 2) it is not known in 2014, so NA 2 does not contradict AG 7 or extra ecclesiam nulla salus http://eucharistandmission.blogspot.it/2014/05/if-someone-is-saved-with-ray-of-truth.html#links

Orthodox Catholics have no comments on the University of Bristol video
http://eucharistandmission.blogspot.it/2014/05/orthodox-catholics-have-no-comments-on.html#links

As I am sure Pater Ignotus and Father McDonald can well explain to us, the Catholic Church does not maintain that you have to be a Catholic to be saved.

But to get you started please read the Catechism sections 839-848 and mediate on the following passage in section quoted in section 847:

“Those who, through no fault of their own, do not know the Gospel of Christ or his Church, but who nevertheless seek God with a sincere heart, and, moved by grace, try in their actions to do his will as they know it through the dictates of their conscience—those too may achieve eternal salvation.”

But of course all are saved only through Jesus Christ.

As I am sure Pater Ignotus and Father McDonald can well explain to us, the Catholic Church does not maintain that you have to be a Catholic to be saved.

Lionel:
Yes it does in Ad Gentes 7 which says all need faith and baptism for salvation.
This is the same message of Dominus Iesus 20.
Ad Gentes 7 is placed in the Catechism of the Catholic Church under the title Outside the Church No Salvation.

But to get you started please read the Catechism sections 839-848 and mediate on the following passage in section quoted in section 847:

“Those who, through no fault of their own, do not know the Gospel of Christ or his Church, but who nevertheless seek God with a sincere heart, and, moved by grace, try in their actions to do his will as they know it through the dictates of their conscience—those too may achieve eternal salvation.”

Lionel:
The above passage does not state that these cases are visible to us, seen in the flesh. So these cases, are not exceptions to Ad Gentes 7.

De facto in reality, objectively, all need 'faith and baptism' to go to Heaven and avoid Hell.

De jure ( in principle) hypothetically, in theory, a person can be saved in invincible ignorance or with implicit desire, as known to God.This is probability, a possibility but not a known exception in 2014.

If you are inferring that a possibility is a known case in 2014 it is irrational. We cannot see the dead and neither does any magisterial text ( Vatican Council II etc) make this claim.

But of course all are saved only through Jesus Christ.

Lionel:
Yes all are saved in Jesus Christ those who are saved with 'faith and baptism' and those with implicit desire etc.

Those persons who are saved with implicit desire ( baptism of desire) are not visible for us but invisible. So they are irrelevant to the traditional teaching which says all need to be Catholic,( with faith and the baptism of water,which is visible) for salvation.

All adults need faith and baptism for salvation in 2014 and you and I do not know a single exception.

I'm not sure I follow your drift. It's not Dr Shaw's brief to make doctrinal statements. What he does do is take to task certain clerics like Monsignor Basil Loftus who use the Catholic media to peddle heresy.

You seem to be suggesting that those who promote the traditional liturgy have sold their souls to the Devil in order to do so. I have to admit that I have not been over-impressed by Vincent Nichols as Archbishop of Westminster, but that is beside the point. It's better to work with the hierarchy than to set yourselves up against them.