THE ENIGMA THAT IS POPE FRANCIS 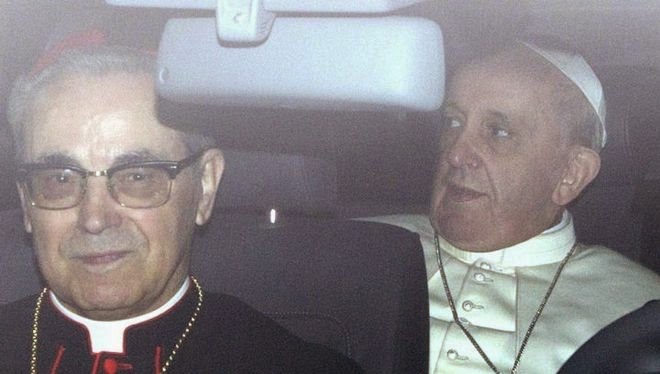 Sandro Magister who writes the Chiesa Blog has a good article on Pope Francis which you can read by pressing this sentence.

Here are some money quotes:

Francis is the most popular pope in history.

And yet Bergoglio is anything other than tender with what he calls the dominant "uniform thought," atheist and "libertine," the "new opium of the people." His vision of the world is apocalyptic, of a cosmic battle with the devil as the great adversary. He speaks of it often, especially in his morning homilies. He is not silent about his aversion to the advent of new self-proclaimed families without "the masculinity and femininity of a father and a mother." He is inflexible in calling abortion an "abominable crime."

But where Francis has most revealed this style of his was in the basilica of Saint Peter on March 27, at the Mass he celebrated in front of more than five hundred Italian ministers, deputies, and senators. Not a smile, not a greeting. And a homily full of reproofs in which the key word was "corruption." A word that in Bergoglio's lexicon indicates the hardening of the sinner in his sin, whatever that may be, which blocks him from accepting the forgiveness of God. But which was understood by almost everyone, including the politicians present, in its contemporary meaning as the specific crime that goes under that name.

The "who am I to judge" that has become the key to the narration of this pontificate certainly applies, as he has said, to the homosexual of good will who is in search of God, but on many other things and persons Francis judges and in spades, siding for or against and giving first and last names.

He did not hold back from aiming against Nunzio Scarano, the monsignor of the curia arrested for financial crimes but still awaiting sentencing, the stinging words: "He does not resemble the blessed Imelda."

Nor is he silent when it comes to supporting the needs of workers, as he did on the Wednesday after Easter, when he came to the defense of the four thousand workers of the steel mill of Piombino at risk of closure.

On the question that has come to be the central object of the dispute, communion for the divorced and remarried, Francis continually alternates flexibility and firmness. When some of the leading bishops in Germany were sending out signals of a breaking of the ranks in favor of communion, the pope had another German, prefect of the congregation for the doctrine of the faith Gerhard Ludwig Müller, give a stern order to halt in "L'Osservatore Romano."

But then he brought forward, as the only speaker at the consistory called to discuss the question, yet another German, the cardinal and theologian Walter Kasper, who has fought for thirty years to relax the ban on communion. And he sided with him, warmly praising him even after other cardinals had risen up against him.

"Everything depends on how 'Humanae Vitae' is interpreted. Paul VI himself, in the end, urged confessors to be very merciful and pay attention to concrete situations. But his genius was prophetic, he had the courage to take a stand against the majority, to defend moral discipline, to exercise a cultural restraint, to oppose present and future neo-Malthusianism. The question is not that of changing doctrine, but of digging deep and making sure that pastoral care takes into account situations and what it is possible for persons to do."

Who's is the final quotation?

It is in fact worthwhile to reread with attention what Bergoglio said with regard to that encyclical in the March 5 interview with "Corriere della Sera":

"Everything depends on how 'Humanae Vitae' is interpreted. Paul VI himself, in the end, urged confessors to be very merciful and pay attention to concrete situations. But his genius was prophetic, he had the courage to take a stand against the majority, to defend moral discipline, to exercise a cultural restraint, to oppose present and future neo-Malthusianism. The question is not that of changing doctrine, but of digging deep and making sure that pastoral care takes into account situations and what it is possible for persons to do."--None other than Pope Francis

I suppose we must balance this with Pius XI's warning that, "If any confessor or pastor of souls, which may God forbid, lead the faithful entrusted to him into these errors or should at least confirm them by approval or by guilty silence, let him be mindful of the fact that he must render a strict account to God, the Supreme Judge, for the betrayal of his sacred trust..." (Casti Connubii, 57)

"Paul VI, in the end, urged confessors to be very merciful and pay attention to concrete situations". This is only part of the story. Paul VI may have been taken aback by the storm of dissent which followed HV, but his reaction was to refuse to back bishops who disciplined publicly dissenting clergy - Cardinal O'Boyle of Washington was ordered by the Holy See to lift the canonical penalties he had imposed, without requiring the offenders to publicly recant their views.

This 'Truce of 1968' was identified by George Weigel as giving a major boost to what is called 'cafeteria Catholicism' and it does seem to mark a turning point; bishops who had hitherto seen themselves as authoritative teachers now became 'facilitators', open to 'mature dialogue' and endeavouring to keep everyone on-side. More than forty years later, Gary Gutting, a philosophy professor at Notre Dame and a Catholic, could write in the New York Times: 'It is not for the bishops but for the faithful to decide the nature and extent of episcopal authority' and that regarding the Church's teaching on sexual morality 'Catholics have decisively rejected it'.

John Paul II made mistakes (the greater the man, the more obvious his flaws) but throughout his long pontificate I felt the Church was in safe hands. I didn't feel this in the years 1968 to 1978, and I don't feel it now.

By all sensible accounts, 1968 was indeed a pivotal year for the US Church and for the nation in general, with Humanae Vitae crushed by the clergy, and our confidence in Vietnam crushed by the Tet Offensive. The year served as a victory for Hippie "free love" and (perhaps justifiable) pacifism, and continues to serve as a confirmation of ecclesial and political skepticism over here.

The Tet Offensive was a complete failure for the NVA. It was only a propaganda victory for the Left and the anti-war crowd. We killed so many gooks that ammunition could not be supplied fast enough. You could smell napalm, and its aftermath, for miles. They lost every major engagement and failed in all of their tactical objectives. What really hurt was the so-called "Vietnamization" of the war in '69. When you turn the war over to the losers, you lose.

Gene is right. Any military historian will tell you that the victory of US and ARVN forces in 1968 was decisive and had it been followed up the war would have been over in another year. General Westmoreland's strategy would have been vindicated.

Can you imagine, after 8 August 1918 when at the Battle of Amiens the Allies, using what would be called 'blitzkrieg' in the next war inflicted a defeat on the Germans which Ludendorff called 'the black day of the German army' and which inaugurated the 'advance to victory', Haig, Foch and Pershing sitting down and saying 'Well, this is it chaps, let's throw in the towel and all go home'?
I think not.