You can't help but feel sorry for the heterodox progressives in the Church who are finally beginning to realize that their emotional giddiness concerning Pope Francis who they thought was one of them was all wrong and now their giddiness has turned into a severe hangover and into despair. 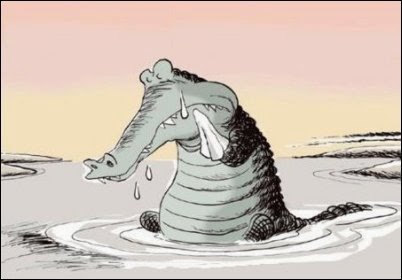 As my posts below this are indicating, there is great discomfort out there in heterodox land concerning Pope Francis and his true colors.

Of course, anyone reading this blog knows that I've been saying this all along. Pope Francis is the most Catholic pope we've had in a long time and one who means business and is going to accomplish the "reform of the reform in continuity" and read Vatican II through hermeneutic of continuity. He is going to implement Vatican II and in the right way!

Here is a whaling and gnashing of teeth article from the National Chismatic Reporter (NCR) pointing out the obvious which I've pointed out since day one of this Pontificate!

Time to face facts: Pope Francis agrees with the doctrinal assessment of LCWR

On May 9, 2013, I wrote the following headline: "For LCWR, the more the papacy changes, the more it stays the same."

One year later, the Congregation for the Doctrine of the Faith, sadly, has confirmed my suspicions.
I wrote the headline after the head of the doctrinal congregation, Cardinal Gerhard Müller, announced that the newly elected pope had affirmed the findings of the doctrinal assessment of the Leadership Conference of Women Religious.

At that point, Francis' papacy had barely hit the two-month mark. Many saw hopeful signs that the Vatican would soon undergo substantive changes and that the whole LCWR debacle would fade into distant memory.

Some even posited that Francis was barely aware of what Müller was doing. Once the new pope got up to speed, many commentators said, he would put a stop to the scrutiny of the nuns. He'd probably get rid of Müller altogether once he started his curial cleanup.


Instead, Francis not only kept Müller in his job, he elevated him to cardinal.
Some LCWR supporters found increasing hope in an unofficial transcript of a talk that Francis gave to members of the Latin American Conference of Religious in June 2013. In the course of his off-the-cuff remarks, Francis reportedly said:


They will make mistakes, they will make a blunder, this will pass! Perhaps even a letter of the Congregation for the Doctrine (of the Faith) will arrive for you, telling you that you said such or such thing ... But do not worry. Explain whatever you have to explain, but move forward.

What got less attention in that speech, however, was Francis' disapproval of spiritual "elites" who espouse a new form of gnosticism:


The second [worry] is over a gnostic current. These pantheisms ... they're both currents of elites, but this one is of a more formed elite. I knew of one superior general who encouraged the sisters of her congregation to not prayer in the morning, but to give themselves a spiritual bath in the cosmos, such things. ... These bother me because they lack the Incarnation!


I do not think I overstate the point when I say that the futuristic ideas advanced by the proponents of Conscious Evolution are not actually new. The Gnostic tradition is filled with similar affirmations and we have seen again and again in the history of the Church the tragic results of partaking of this bitter fruit. Conscious Evolution does not offer anything which will nourish religious life as a privileged and prophetic witness rooted in Christ revealing divine love to a wounded world.

As NCR's Joshua J. McElwee reported back then, Francis told women religious "to keep their lives centered on Christ, to think of authority in terms of service, and that they must hold a 'feeling with the church that finds its filial expression in fidelity to the magisterium' " (emphasis mine).

The similarities between Francis' quotes and Müller's statement demonstrate clearly that Müller's talking points are coming directly from the pope.

Yet some Catholics still want to distance Francis from the doctrinal congregation's latest attack on LCWR, as if Müller were somehow working in a parallel church that exists outside of papal control. At some point soon, we must take into account all that we've learned about the new pope over the past year and face reality: Francis agrees with the doctrinal assessment.

In 2012, the doctrinal congregation criticized LCWR for exhibiting "radical feminist themes" and for failing to promote the church's teachings on women, contraception and same-sex marriage.

Francis has been painfully honest about his discomfort with feminism. In the 2010 book On Heaven and Earth, then-Cardinal Jorge Bergoglio explained that the feminist movement achieved its goals when women won the right to vote:


[F]eminism, as a unique philosophy, does not do any favors to those that it claims to represent, for it puts women on the level of a vindictive battle, and a woman is much more than that. The feminist campaign of the '20s achieved what they wanted and it is over, but a constant feminist philosophy does not give women the dignity that they deserve. As a caricature, I would say that it runs the risk of becoming chauvinism with skirts.

Francis' negative sentiments about feminism have persisted. He distorted the struggle for women's equality in his much-celebrated "Big Heart Open to God" interview with Jesuit Fr. Antonio Spadaro, saying,


I am wary of a solution that can be reduced to a kind of "female machismo," because a woman has a different make-up than a man. But what I hear about the role of women is often inspired by an ideology of machismo.

Additionally, Francis has given no signs that he will change any of the teachings that the LCWR supposedly failed to promote.

He has reasserted John Paul II's ban on the ordination of women.

He was silent while Filipino hierarchs continued their full-court press to stop the enactment of a law requiring state-sponsored contraception, a law that vastly improves medical care for poor women and children and promises to decrease poverty and overpopulation.

He took no action when Ugandan Archbishop Cyprian Lwanga publicly lauded the president of Uganda for passing an extreme anti-homosexuality law, a law that clearly violates the Catholic church's teaching to protect gays and lesbians from discrimination.

With words and precedents like these, should we be surprised that Pope Francis is pushing forward on the doctrinal assessment?

Pope Francis and the women of LCWR share a deeply sacramental understanding of their calling to serve those on the margins of our world. They agree that it is in ministering to the poor, the sick, and the vulnerable that they touch the wounded body of Christ.

Where they seem to disagree sharply, however, is in their understanding of religious life as a prophetic life form. When women religious touch the wounded body of Christ in their work, it breaks open their hearts in a way that compels them to ask deeper theological questions. It gives them the eyes to read the signs of the times and recognize the prophets in their midst. It gives them the courage ask bold new spiritual questions.

Like most popes before him, Francis sees the church as a prophetic voice to the outside world but is far less enthusiastic about the prophetic voices that cry out for justice inside the church. As he told the International Union of Superiors General last May, women religious should put themselves "in an attitude of adoration and service" and find their "filial expression in fidelity to the magisterium." It is an "absurd dichotomy," he said, to think "of following Jesus outside of the church, of loving Jesus without loving the church."

What may appear to be a conflict over feminism, culture wars and conscious evolution is, ultimately, a cosmic struggle over whose voice the sisters choose to follow.

[Jamie L. Manson is NCR books editor. She received her Master of Divinity degree from Yale Divinity School, where she studied Catholic theology and sexual ethics. Her NCR columns have won numerous awards, most recently second prize for Commentary of the Year from Religion Newswriters (RNA). ]
Posted by Fr. Allan J. McDonald at Wednesday, May 14, 2014

The author mentions the Ugandan morals law. Defending it, the President of Uganda said, "I came to learn that homosexuality was unhealthy and this is because they go to a wrong address. Sexual organs of a human being are highly specialised" (quotation from the link provided in this article). The proposed punishments are too harsh, but it's refreshing to hear some common sense every now and then! He's the "Gene" of Uganda!

Like many here, I was suspicious of Pope Francis when he was first elected, but over the last 4 or 5 months, I've really come to like him, and my eyes have been opened that he really is "one of us", he just as a different style that attracts "the others".

To be honest, I wish my pastor would celebrate Mass in the style of Pope Francis, rather than "preside" over it as he does like a game show host, with jokes, pop culture references, and allowing the laity to run wild.

I feel like the conservatives wanted a warrior messiah figure to fight the pagans, while the liberals wanted the all-permissive hippy-Rabbi. Instead, it looks like we got a more Christ-like balence of compassion and orthodoxy which angers both extremes.

When visiting the NCR and reading the comments regarding the CDFs opposition to LCWRs award to Barbara Hubbard and her "Christ Consciousness" writings, it is clear that many of the readers are either anti Catholic, non Catholic or are sadly very deceived Catholics and need our prayers and not just our scorn. Barbara Hubbard and others in the "conscious evolution" or "Christ Conscious" movement are preaching a very anti Christ, and dangerous message! It is simply a new form of Gnosticism. It is very dangerous because it gives people the sense of hope that we will enter into a great age of unity with Christ, but NOT through faith and faithfulness in Jesus Christ, but simply through an automatic spiritual "evolution" that if anything, is only dependent on our "openness" to this "insight". Thus, victims who have fallen for this pseudo Christianity, pseudo science nonsense become arrogant in their special awareness of this truth and accuse the bishops and the Vatican, and probably any Christian who professes his need for a Savior, as backward at best and simply evil at the worst. How utterly anti Christ! And of course that is how one might describe the mission of the National Catholic Reporter. But it is nevertheless sad to see so many deceived souls following this bilge. They desperately need our love and prayers, NOT our scorn!!

Mordacil, THAT is precisely and in a nutshell what Fr. has been saying for over a year here, If I have understood correctly. Thank you.

FrAJM, I think it would be either "wailing" and gnashing of teeth or whaling and narwhal of tooth (or molar).

I suppose the Trads would have wanted a warrior messiah figure to fight pagans but I think most would have been happy with someone who can tells apart.

Conservative, liberal, traditionalist: these labels have no place in Christianity. One is either Latin or Eastern, and then either faithful or fallen-away.

I agree, JBS. You either believe and are faithful, or you are in unbelief. Believe it or not, I actually know political liberals who are devout and faithful Catholics…not many, but some. Won't wunders neva' cease! PS I know some pretty no count conservatives, too.

I hope you're right father, but I worry about the two Family synods and the Pope's praise and reliance on some truly horrible cardinals, like Kasper and Maradiaga and Baldisseri. He better not try to change Catholic moral teaching, including on divorced and remarrieds.