SHOULD WE BE ATTACHED OR NOT?

This is Saint Patrick's Cathedral around 1908. Please note the completely different high altar, which was removed in the 1940's for a freestanding one under the Baldichino. This altar is attached to a reredos: 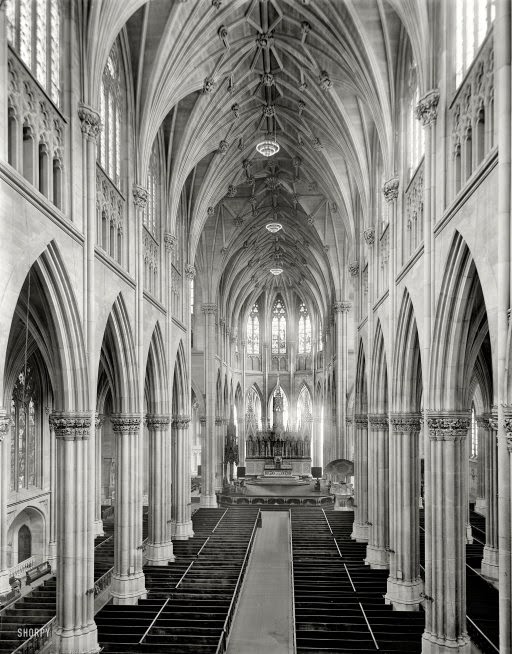 These are shortly after the new free standing altar replaced the attached in the 1940's: 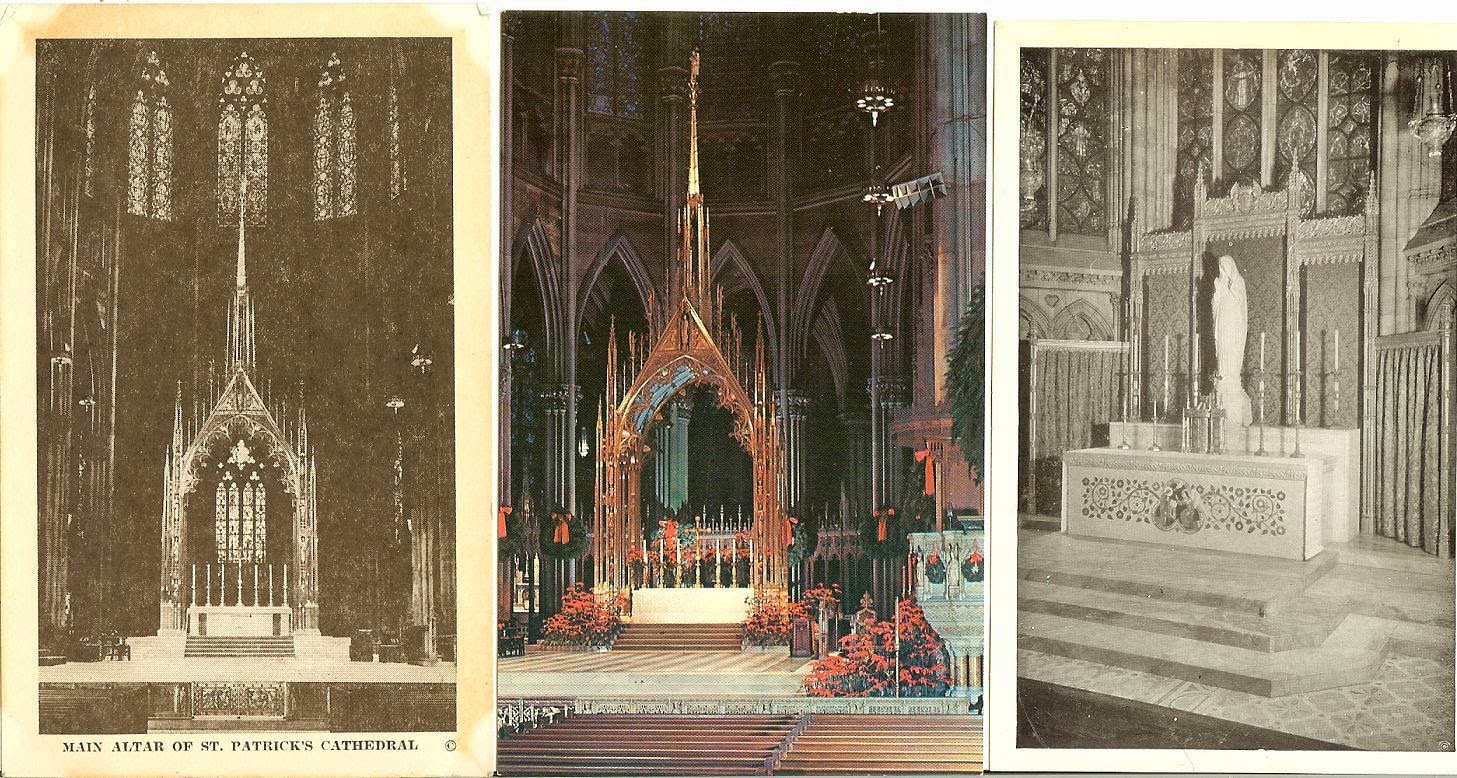 Then in the 1960's another altar was placed in front of the free standing one, making the cathedral have two main altars: 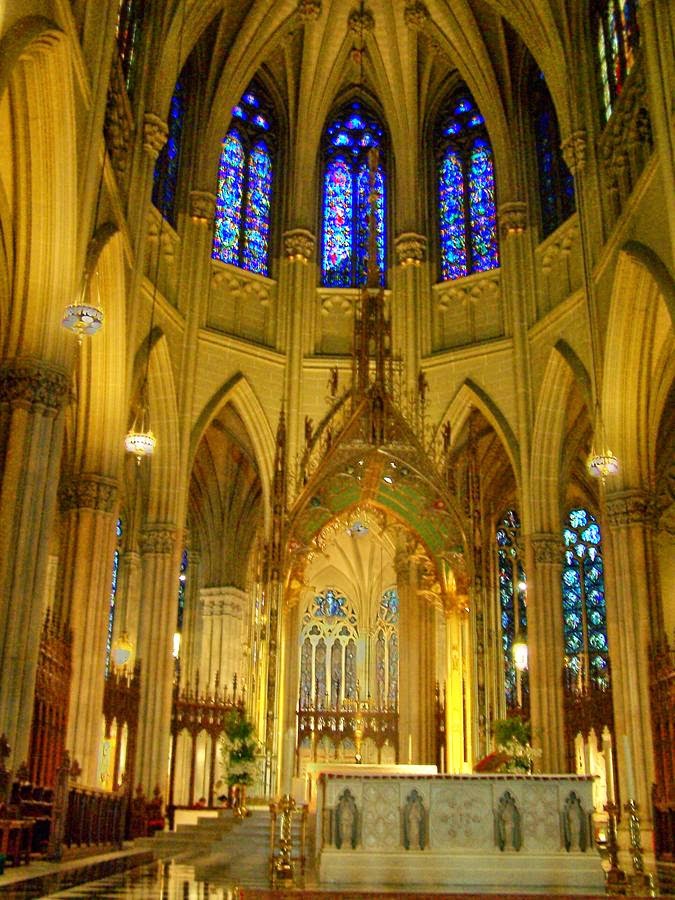 But today, the old freestanding altar returns as the main altar with the other one removed! 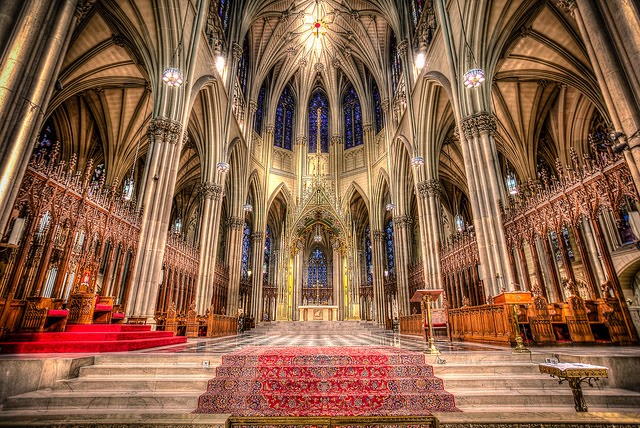 The Basilica of the Shrine of the Immaculate Conception in Washington, DC could learn a lesson or two from St. Patrick's and the Brooklyn's renovated cathedral both of which restored the use of the high altar under the baldichino. The Shrine still has that silly free standing altar with a floral altar covering that has been in use for decades, decades, and I mean decades. Return to the high altar. It makes sense! 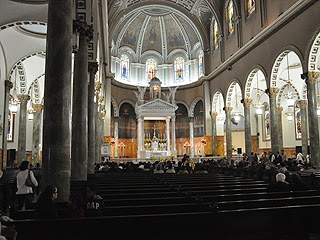 Shrine of the Immaculate Conception: 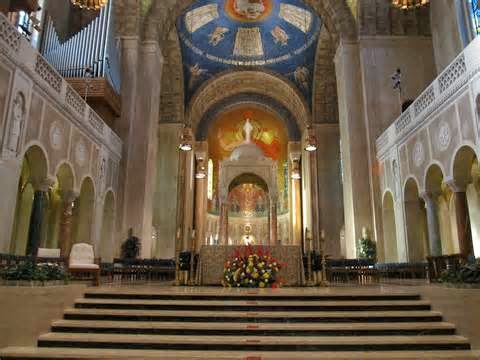 I think it was way back in the 1940's that St. Patrick's Cathedral in New York removed its attached altar and reredos, to install a free standing altar under a Baldichino. That was in the 1940's and of course the Mass remained facing eastward or toward God the transcendent.

The oldest form of the altar of course is the free-standing one. The major basilicas in Rome all have historic free-standing altars. All of the major basilicas in Rome face east when the priest or bishop is celebrating Mass toward the nave, except for one, which is St. Paul's Outside the Walls. It altar faces St. Peter's and thus west, Saints Peter and Paul facing one another!

I prefer a free standing altar even if the older altar with its marvelous reredos remains in tact. It then become a back drop and place of reservation for the Holy Eucharist. This permits the Mass to be celebrated in either direction.

The Pauline Chapel at the Vatican renovated under the glorious reign of Pope Benedict has the table part of the altar detached from the main reredos, although it remains looking like one unit from the nave. Pope Benedict celebrated Mass on this altar ad orientem, Pope Francis has done so toward the nave. Either way is acceptable although I do have prejudice toward ad orientem for a variety of reasons, none of which are technically doctrinal.

This is Holy Innocents Church in Long Beach, California. The bishop there allowed an attached altar for it new construction. They also celebrate the other form of the one Latin Rite, the EF Mass: 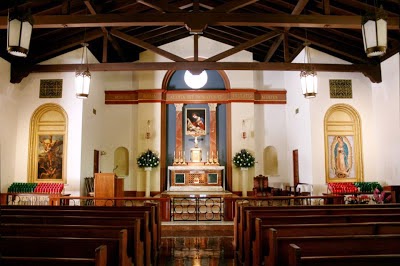 And of course this is the parish in Brooklyn that recently installed an old high altar taken from a closed church and use it as a reredos and tabernacle to the new free standing altar in front of it: 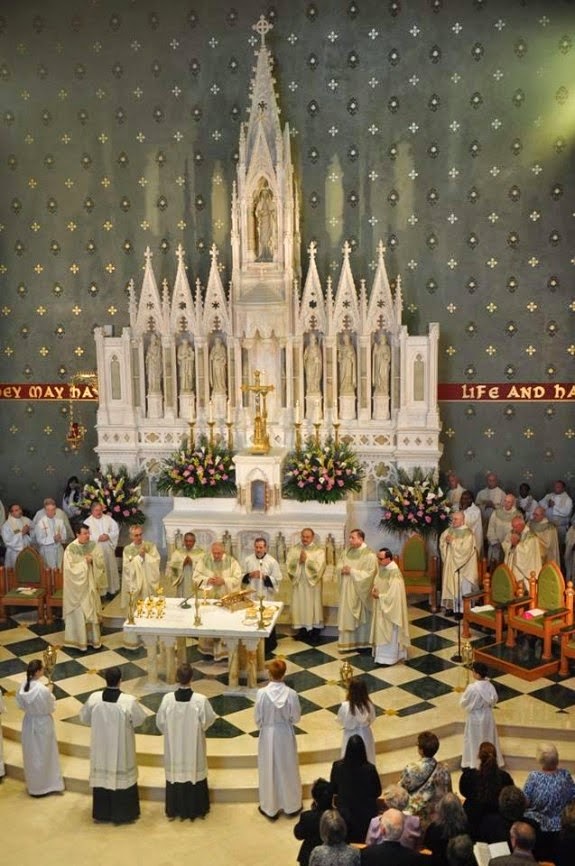 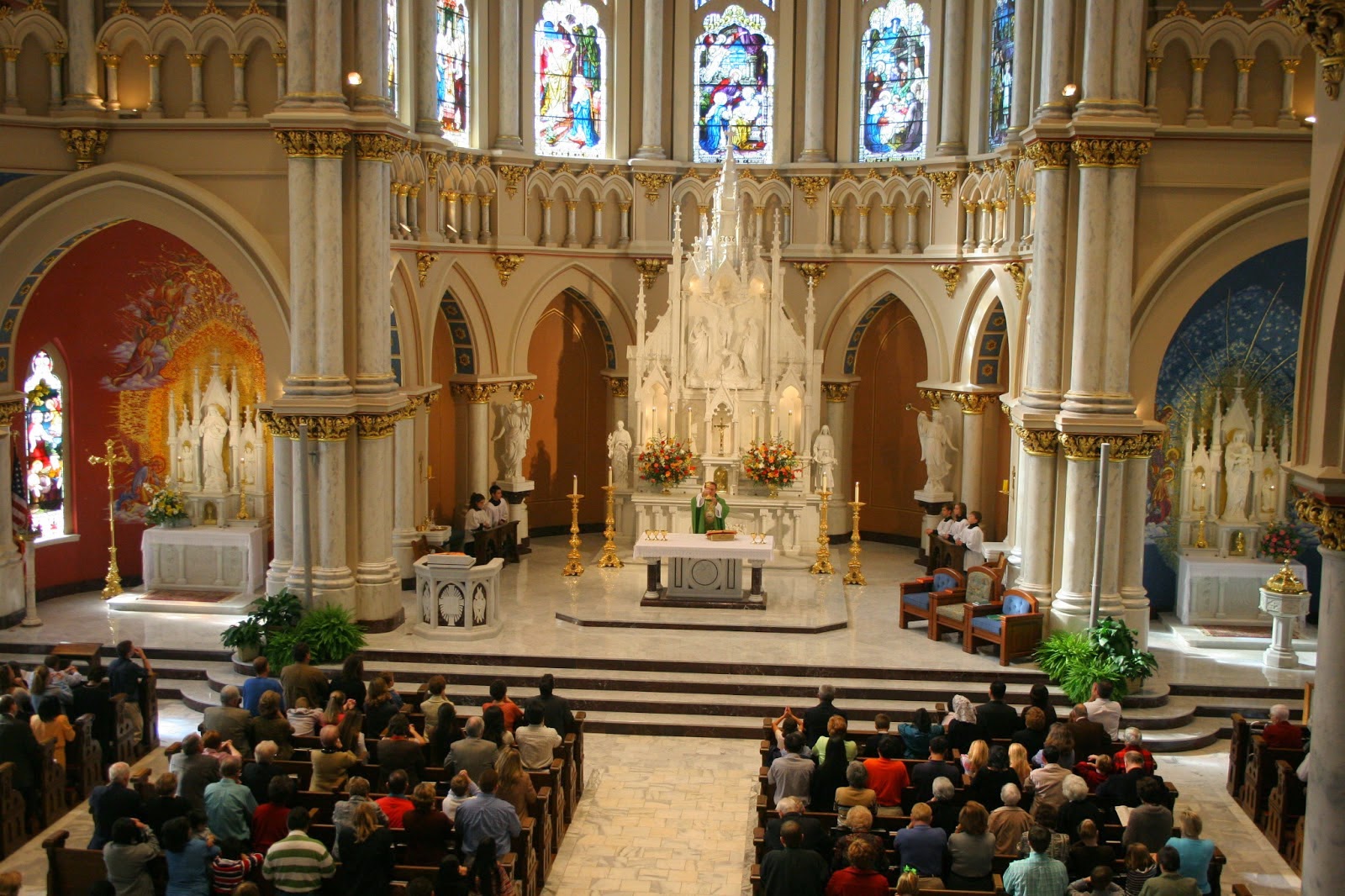 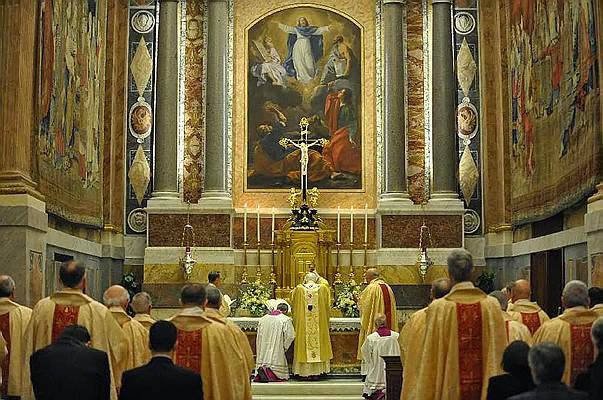 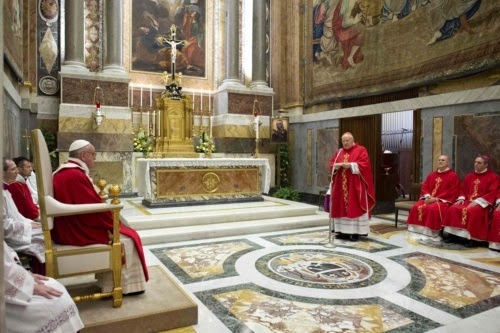 I'm fine with attached or detached. The girm seems to prefer detached. I really don't like two altars in one sanctuary though.

A free standing altar is fine, and indeed is the ancient historical norm. However, if the reredos against the wall behind is used for the Tabernacle, is it not untoward to celebrate Mass with the priest's back to Our Lord?

Of course, the solution is obvious, if the old altar is used for the placement of the Tabernacle, and a free-standing altar is placed in front of it, then Mass should only be celebrated ad orientem.

It may be relevant to point out that in the Roman basilicas where ad orientem means facing the people, there is no Tabernacle immediately at the priest's back. (A tabernacle at a sufficient distance in a large cathedral might not be a problem.)

It seems to me the pre-Vatican II and in some post Vatican II churches, practice of veiling the tabernacle and in the EF Mass having a large altar card hide the tabernacle was one solution.

I believe also that in Pontifical Masses with bishops in the EF Mass, the tabernacle if present dead center is to be empty!

But no matter what, at some point a priest's back will be to the tabernacle especially when distributing Holy Communion.

Both are better than the plain wood kitchen counter style altars we are stuck with in the suburbs of Detroit.
http://aodfilmservices.smugmug.com/Churches/St-Hilary-Redford/i-5zgrz3Z/0/L/001004church-facing%20east-L.jpg

Poor Detroit.....Once a glorious Archbishophric, now, like the city itself, a sad ruin.

FrAJM, your solution with the Mass cards is used in many EF parishes in USA. What about a really nice portable altar that can be moved in place when the OF/VP Mass is done?

"It seems to me the pre-Vatican II and in some post Vatican II churches, practice of veiling the tabernacle"

The tabernacle veiled is certainly the current practice in all the churches I regularly attend. If I walk into a church and don't see the tabernacle veiled--preferably in the correct liturgical color of the season--I take it as a generally accurate signal to curb my expectations of that church's liturgy.

I don't like the idea of a portable altar for the OF Mass and I really dislike two separate altars in the sanctuary when it can be avoided. What we did at St. Joseph was to make sure the free standing altar was as high as the old high altar table attached to the reredos. From the congregation it appears as one unit, not two and the old altar does not appear as an altar but as a reredos.

Some have wanted me to celebrate the EF Mass at the old altar and I have refused from two perspectives, one that the freestanding altar which is marble, substantial and dignified would be in the way and block what would normally be the beauty of the EF Mass visually. The second reason is that using the old altar for the EF denigrates the new altar which is in fact the main altar of the Church and consecrated for this purpose.

When we installed the new altar replacing a very ugly, flimsy predecessor, I had it installed higher and with the potential of ad orientem Masses for the OF as we did this two years before SP was issued by Pope Benedict. I knew he was in favor of ad orientem and thought he might try to legislate this as the norm never dreaming that he would issue SP allowing us to have the EF Mass, where ad orientem is the norm.

So the Holy Spirit works in mysterious ways. We have one OF Sung Mass each Sunday at 12:10 PM as an ad orientem Mass and this has worked well at our free standing altar.

"I really dislike two separate altars in the sanctuary when it can be avoided."

"The principle of the unicity of the altar is theologically more important than the practice of celebrating facing the people.""

in opposition to having two separate altars in the sanctuary, and seemed to say that when a historically significant high altar is present, it should be used, and no table altar be placed in front of it.

O Henry! That was just and I mean just an editorial and has no authority, let me repeat that, no authority whatsoever as it concerns bishops and what they will allow or won't. We don't need musical altars and musical ways of facing for Mass when it comes to individual priests and pastors. It will create havoc.

If an altar is under a baldachin, in Italian baldacchino, but more correctly a ciborium magnum, it is likely to be free-standing and can permit celebration in either orientation. The rationale for forward altars is only partly to facilitate celebration versus populum; it is mainly because the vernacular Mass was seen as a dialogue between the 'presider' and the assembly. This is not a feature peculiar to the Novus Ordo; it is already there in Inter Oecumenici (1964) which was the basis for the interim Ordo of 1965.

Fr. McDonald, of course it is true that a CDW editorial has no canonical authority whatseover.

But this editorial stated a very sound liturgical principle--the unicity of the altar. The fact that so many among the troubled generation of bishops, drawn from troubled generations of priests, are not liturgically and doctrinally sound, is merely a statement of the Church's current problem, and in no way a solution to it. At bottom, it's why faithful laity and priests have suffered so much, and continue to do so. The only solution is the biological one, which will come too late for many of us.

As a New Yorker, I'd like to point out that the "two altars" arrangement at St. Patrick's Cathedral did not originate in the '60's, but rather was inaugurated during the tenure of John Cardinal O'Connor, sometime during the summer of 1984.

In the period between the close of the Council and the death of Terence Cardinal Cooke in October 1983, the liturgical environs at the Cathedral were notable for being quite in what Pope Emeritus Benedict XVI would call a Hermeneutic of Continuity. The longtime Cathedral Rector, Msgr. James Rigney, pretty much left the Cathedral alone after taking office in 1969, and Cardinal Cooke was pretty much a "do the red words, say the black words" kind of Bishop.