AND NOW FOR A MOMENT OF LEVITY

During a papal homily in Jerusalem, our Lord decided the levitate the zucchetto of the Holy Father to infuse some levity into the seriousness of the particular moment of encounter during the homily. Who said that Jesus doesn't have a sense of humor? 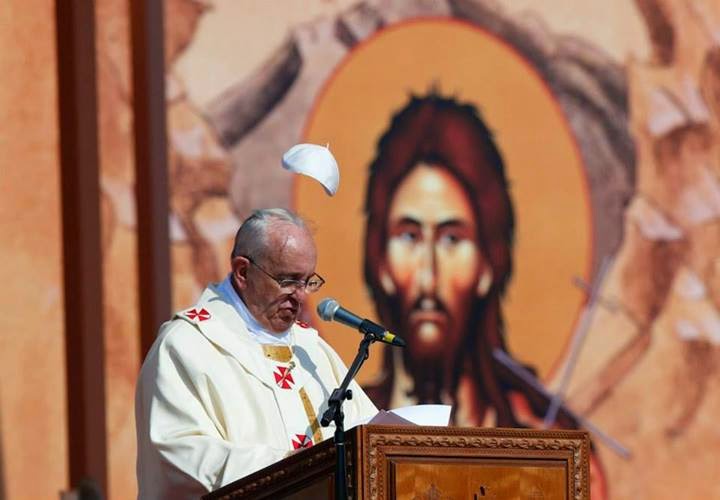 This is off topic for this particular post, but I can't seem to recall the name of the post you wrote about an upcoming New Translation for the Nuptial Mass. So I thought I'd just reach out here.

My fiance and I are getting married this August and we were notified that we now have to omit the Penitential Act and go straight into the Gloria right after the greeting. I've read around the Catholic blogosphere and found that this makes for an awkward transition. However, a post of the CC Watershed blog mentions that the upcoming edition

"will include an introductory passage to be read after the greeting, which will ease the transition a bit. [The USCCB Secretariat for Divine Worship] read the draft of the introduction to us, and it impressed me as a beautiful and understandable précis on the theology of Holy Matrimony."

Do you know if there are copies of this "by-the-book" introductory passage somewhere? I think it would be better to follow a rubric rather than force an off-the-cut intro/transition. Any information would be greatly appreciated.

Msgr. James Moroney gave us a talk in Rome on the new marriage rite and actually posted much of it on his blog. However, I just checked it an it has been removed.

As I recall, there was a formal introductory statement to the Nuptial Liturgy following the Greeting of the Mass.

You may or may not know that at the Vatican when the Penitential Act is omitted with its absolution due to some other liturgical act, such as the rite of sprinkling Holy Water, it is always followed by the free-standing Kyrie.

The Penitential Act is omitted, but I think the Rite of Sprinkling Holy Water may be used. Even if it is omitted, there is no need to omit the free standing Kyrie.

So I would fore as perfectly legitimate given the rubric that the penitential act be omitted with its absolution that, that after the Introductory statement that could be pre-written that the Kyrie would be sung followed immediately by the Gloria.

Thanks so much for the information, Father! I didn't realize that the Penitential Act (Confiteor and Absolution) was separate from the Kyrie.

We'll probably first speak with our Officiant and the music director to see what they think of this approach.

However, if our Priest suggests that we still leave out the Kyrie, is the formal introduction available somewhere? If not, do we leave that to him?

Kyrie should come before the Gloria though.