POPE FRANCIS' QUOTE OF THE DAY!

Which image is your experience of priests when you go to confession? 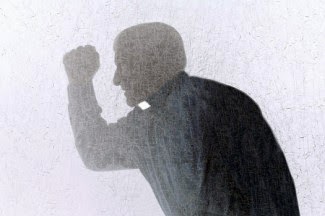 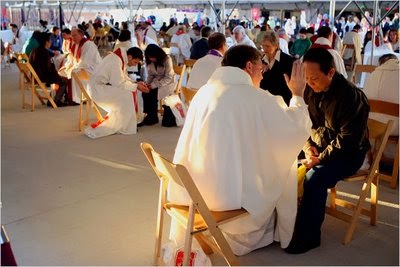 Pope Francis will go down in Church history as the pope who restored the Sacrament of Penance, Confession, to its rightful place in the Church and he will be known as the pope of Divine Mercy more so than Saint John Paul II.

Here is the papal quote of the day, which I translated myself, but not as good as this, in a comment under the ordination Mass:

In his homily at an ordination mass this morning, Pope Francis urged those becoming priests to follow Christ’s example of mercy in the sacrament of confession.

“Never grow tired of being merciful! Please! You have the capacity to forgive as did the Lord, who did not come to condemn, but to forgive! Have mercy, a lot!”

“If you come to have concerns about being too much of a ‘forgiver,’ think of that saintly priest…who went before the tabernacle and said, ‘Lord, forgive me if I have forgiven too much. But you have given me the worst example!’” (The pope said this in the Italian way of showing humor.)

The Holy Father spoke to the men of his sadness at hearing of people who had the experience of being “thrashed” or “yelled at” in the confessional and never returned because they felt that “the doors of the Church were closed in their face!”

Priests should rather follow in the way of Jesus, the good shepherd who acts as the gate to the sheepfold. “The gate of mercy is the wounds of the Lord: if you don’t enter into your ministry through the wounds of Christ, you will not be good shepherds,” he cautioned.

Pope Francis also reminded those seeking ordination to be faithful to the gospel they were taught rather than creating their own ideas.

The first picture of a priest with his fist in the air is hilarious. If my priest had done that to me, I would've been tempted to give him a fist bump, LOL.

And "that saintly priest" the Pope spoke of, is a real priest. The Pope shared that story when he met with the priests of Rome a while ago. :)

Have a good sunday~

"The Holy Father spoke to the men of his sadness at hearing of people who had the experience of being “thrashed” or “yelled at” in the confessional..."

Oh come on, Holy Father, say that to St. Pio of Pietrelcina! (humor)

[Does anyone here know about his confessional "habits"?] ;-)


The trick is that the priest needs to keep alive the connection with contrition and desire to stop sinning. It is sort of like the person who wants to quit smoking and asks you to remind him when he starts to light up. He usually gets resentful. So it depends on how you remind the person.

Speaking of Confession and kneeling, what happens when the altar rail is installed? Is the Bishop still going to discourage kneeling? Is it just to be an expensive decoration? Also, the purpose of the rail being so obvious, will you not encourage more people to avail themselves of this most reverent and proper way to receive? Or is all this just a bad joke?

I always hear this complaint about harsh confessors, but I can't help wondering if this isn't just a fiction used to excuse going to Confession. Surely harsh confessors would also be harsh preachers, and since there are very few of the latter, I find myself doubting the existence of the former.

I guess it depends upon your definition of harsh. I have been lectured briefly before, verbally chastised, and I have been sent to certain Stations of the Cross to kneel and ponder my sins and what happened at that Station. I did not consider any of this harsh, and it felt like real absolution and penance. Of course, I probably would not consider it too harsh if the Priest came out and hit me with a bat…LOL!

why do you always think the Pope is talking to Americans, and the Church in the US? I am sure he knows that in America the problem precisely is Priests who are so afraid of defending the Truth Jesus taught and protected with his own life, that they allow people to sin and go to communion at the same time, and we all know how that is called - false MErcy!

Seriously. My father strapped me a few times when I deserved it. As far as the rail goes, and 'harsh' and pain: today an ancient old lady toddled up to the altar rail on the arm of her son and knelt. The effort was obviously supreme, she was horribly stooped and frail. Makes complainers look pretty silly.

I've never had a "harsh" confessor in my life. I think this is overblown.

I've had some good confessors and some worse ones, but they've all absolved correctly, so whatever.

I have no doubt that there are, in fact, some pretty awful confessors, but really... this would seem to be the extreme minority.

Hmmm, harsh and yelling confessors? I've never heard of such a priest...West or East

And mercy and honesty for the SSPX ?

The inference is not theology or a doctrine. To infer that the dead-saved with ' a ray of the Truth' is visible to us is an intellectual observation.


So in Ad Gentes 7 one can infer that all do not need to enter the Church but only 'those who know' about Jesus and the Church and they are visible on earth.If they were not visible on earth, it would mean that all need faith and baptism for salvation (AG 7).There would be no exceptions. Only God can know who 'knows' about the Church (AG 11,LG 14) and who was in invincible ignorance(LG 16).When they are invisible for us they refer to implicit cases. They are not exceptions to extra ecclesiam nulla salus.

When Cardinal Gerhard Muller was asked about the dogma extra ecclesiam nulla salus , he said 'The Second Vatican Council also said this: Lumen Gentium 14 says: “Whosoever, therefore, knowing that the Catholic Church was made necessary by Christ, would refuse to enter or to remain in it, could not be saved.” 1 He is inferring here that 'whosoever knowing' refers to cases visible to us on earth. So they become explicit exceptions to extra ecclesiam nulla salus. This inference is irrational...


1.The SSPX affirm all texts and documents in Vatican Council II in accord with the traditional and literal interpretation of extra ecclesiam nulla salus.They affirm the dogma on exclusive salvation according to the Church Councils, the popes, saints,Fr. Leonard Feeney and the SSPX General Chapter Statement 2012.2

2.Nostra Aetate 2 (saved with a ray of the Truth) does not contradict extra ecclesiam nulla salus.Nostra Aetate is in agreement with the SSPX traditional position on other religions and salvation.

4.Ad Gentes 11 ( seeds of the Word) does not contradict the dogma on exclusive salvation, the Catechism of Pope Pius X or the Syllabus of Errors.