Two victims of the inverted morality and new fascism in America! CENSORED FOR SPEAKING ABOUT  THEIR RELIGIOUS BELIEFS CONCERNING ABORTION, SEXUALITY AND SAME-SEX MARRIAGE ! 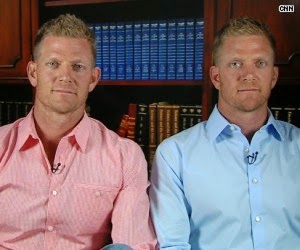 You can listen to a very excellent interview that Gus Lloyd of the Catholic Channel's "Seize the Day" radio program did with the Benham twin brothers, David and Jason of the ill fated HGTV show, "Flip It Forward" by pressing this sentence!

Listening to the interview, one hears two God fearing Evangelical Christians. Morally speaking, these men are on the same page with Catholicism although their "evangelical fortitude" is mystifying to many Catholics who prefer a more introverted and less militant form of Christianity. They are articulate and understand that Vatican II's call to the laity to bring their faith to the world is biblically based.   I don't find them shrill in any way at all and it is a scandal that HGTV's corporate bosses where bullied by the radical homosexual organizations striving to censor men like these two. Fascism is alive and well!

Airing Monday through Friday 7:30am to 10am ET.
Gus Lloyd gets your day started with a prayer and a smile. "Seize the Day" and live in the joy of the Lord! Gus chats with newsmakers, personalities and callers to discuss what's on their minds and in their hearts. Email Seize the Day at seizetheday@thecatholicchannel.org
Posted by Fr. Allan J. McDonald at Wednesday, May 14, 2014