UNFAITHFUL CATHOLICS ARE FINALLY TURNING ON POPE FRANCIS AS THEY WAKE UP AND REALIZE THAT POPE FRANCIS IS ACTUALLY CATHOLIC--SOUNDS FAMILIAR AROUND THESE PARTS, EH? 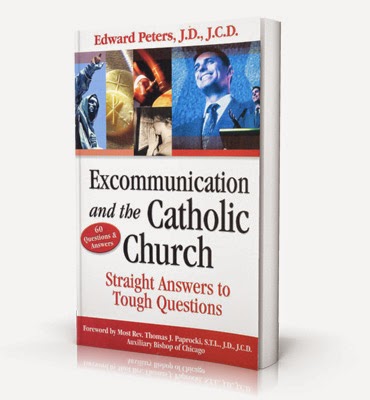 Both Austria and Ireland have associations of priests who dissent from the Church's teachings. Bishops in those two countries have tried heroically to keep them in the fold of the priesthood and Church, but now there appears to be a tipping point and that tipping point is coming from Pope Francis and his orthodoxy. He approved of the excommunication of two dissident Catholics laity in Austria for corrupting the sacraments of the Church and our teachings. Excommunication, especially public excommunication, is a clarion call to those who are excommunicated to repent and return to the full communion of the Church. It is quite pastoral as it has to do with the salvation of those who are excommunicated for taking a path of heterodoxy and division in the Church which go lead them to eternal damnation.


The opinions may differ about the step that Martha and Gert Heizer have taken in celebrating the Eucharist without a priest. It may be seen as a prophetic step that points the way to an overall reform of the Church or it may not be seen that way. The Pastors’ Initiative sees Eucharist and priestly office as belonging together – as long as the Church is able to provide priests to its communities, who share peoples’ lives and share their journey of faith. (My comment: here the priests show their true heterodox colors, and betray a theology that developed in Europe in the early 1970's and long thought to have been put to rest. Pope Francis knows of this silly stuff and is acting in the most juridical way possible sending a message to the entire Church that it will not be tolerated. Pope Francis has judged these heterodox Catholics and by extension these heterodox priests).  But with present developments in the Church fewer and fewer communities have the option of a Eucharistic celebration on Sundays with an ordained priest being present. Martha and Gert Heizer are touching a sore spot: the Eucharist, the mass, the central celebration of our faith and of life as a community, is becoming increasingly rare due to the shortage of priests. For this reason the church reform movements have advocated for a long time that the priesthood should be open to married men and women and that the with the participation of the citizens of the Church new forms of leading the communities should be developed.

The “Ex-Communication” of Martha and Gert Heizer does indeed signal the end of communication in the sense of an open and fair dispute. This way of proceeding is not only completely out of proportion, but it shows the inability of the leadership of our Church to settle differences of opinion and conflicts in accordance with the gospel in a kind and loving way. This is a failure that nobody can be proud of. (My comment: I think all heterodox Catholics use the same manipulation that small children use with their parents when they can't get their way, that somehow their love is called into question. If you take a strong stance, like Pope Francis has in this case, you don't really love and you are not really Christ-like and you really don't understand the Gospel. How many have said this around the world and here in Macon concerning the Mt. de Sales corrective course adjustment in reestablishing Catholic identity as it concerns sexual morality and marriage?)

We appeal to all persons in leadership positions to reverse the Excommunication and to take up instead an honest and fair dialogue with the church reform movements about the future of the Church. (My comment: why does this sound oh, so familiar to me????)

The Pastors’s Initiative
signed by Helmut Schüller, President (He is a dissident priest who was a monsignor but stripped of that title. He heads up other dissident priests in Austria. They may well be excommunicated in the near future and they now know it because of Pope Francis judgements concerning these kinds of Catholics!)
Posted by Fr. Allan J. McDonald at Saturday, May 31, 2014

What I find most galling in this statement, beyond its shear dishonesty, is its complaint about the injustice of an act of excommunication directed against liberals/progressives when they have been informally excommunicating good orthodox Catholics at the local level for the past 40 years. Where was the dialogue when someone wanted to maintain traditional forms of worship and belief? How many countless good men over the years have been removed from the seminary and denied ordination because they did not follow the liberal neo-orthodoxy of the "Spirit of Vatican II"?

If this group would lay aside its emotionalism and look at the facts, they would see that stricter communities have more vocations to the priesthood than lax ones. Their willingness to set aside rules and their watered down Catholicism is perpetuating the problem, not fixing it.

Very interesting read, it is definitely good to know that Pope Francis is willing to do this when it is needed.

"Both Austria and Ireland have associations of priests who dissent from the Church's teachings."

The agenda of the Ass. of U.S. Catholic priests:

These silly associations of priests are irrelevant. The real threats for decades now have been: (a.) conferences and "study weeks" provided by dissidents for clergy, and (b.) seminaries promoting heresy and immorality. Fix the conferences and seminaries that form priests, and Catholic stability will return to the whole Latin Church.

JBS; "Fix the conferences and seminaries that form priests, and Catholic stability will return to the whole Latin Church."

Then it's just a simple matter of having good bishops. Right?

Maybe by around 2030 when bishops from the problem generations have been replaced by ones ordained after the year 2000?

By which time, incidentally, Vatican II--whether good, bad, or indifferent--will be a fading and no longer relevant memory, a council directed to an era long past.

You raise an interesting point. If VCII, like ecumenical councils of the High and Late Medieval period, can best be understood as primarily a pastoral plan for a specific time period, then that would mean a faithful Catholic could give assent to VCII, such as it is, while legitimately recommending an altered approach for a new and changed era.

I believe the four constitutions of VCII were very appropriate for the 20th century, even if they were almost universaly ignored. But, how does one apply these constitutions, read in continuity with the Council of Trent, to the 21st century?

That is an intriguing concept, Henry. It would follow that the more volatile the Age, the sooner the constitutions would fade. We live in Interesting Times so this confusion may pass soon. The problem will be trading for the Devil we don't know.

Father, I read the article, and I don't see the Left "turning on Pope Francis". If anything, this sentacne makes it clear, "This decision is a fatal signal for all who are hoping, together with Pope Francis, for a kind Church that is close to the people.", that they see Pope Francis as "with them", part of the proudly dissident. Your post title is putting the cart before the horse. They have not turned on Francis... they still have "hope and change".

That particular sentence is the type of manipulation so many on the left are making about the Church. They use Pope Francis to advance their agenda when in fact Pope Francis insists that local bishops govern their dioceses and their priests. Pope Francis is already responsible to the excommunication of a couple of priests for similar reasons as the couple above was excommunicated. I don't see excommunication as punitive necessarily since it can be reversed, but Pope Francis has certainly laicizied priests and that can't be reversed. That is as punitive as it gets and it is a very serious judgment against the priest no matter how much they use Pope Francis who said "Who am I to judge?" This is the most judging pope we've had in a very long time!

There is one knit I will pick here at the risk of sounding like a Francis Basher: the issue obviously rests with the local preists and bishop such as the person who penned this letter. Why not DIRECT that fellow to make the correction on penalty of excommunication. That would certainly give Herr und Herren Heretic the chance to change. I also feel like the bad leader needs the biggest boot in the arse.

Pope Francis defies description on being too left or right does not work. Of course the dissidents don't like what he did in the excommunication. They assumed since he was a Latin American Jesuit he would change everything. But while they may be as far as disciple not dogma. This is his second excommunication

Is it my imagination, or has Pope Francis publicly excommunicated more public dissenters in a little over one year than Benedict XVI did in his entire eight year pontificate?