SACRIFICE AND MEAL, NOT EITHER/OR BUT BOTH/AND 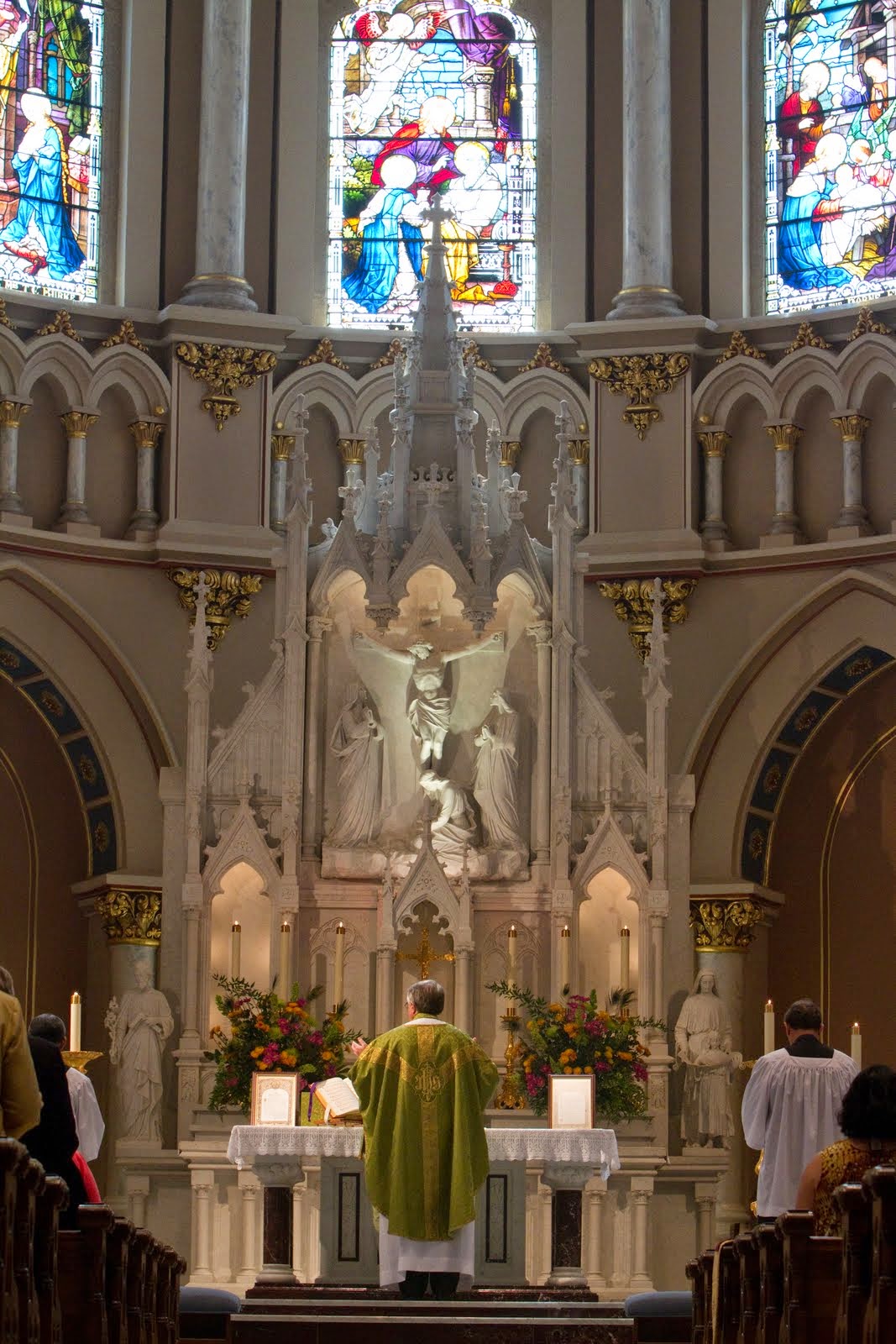 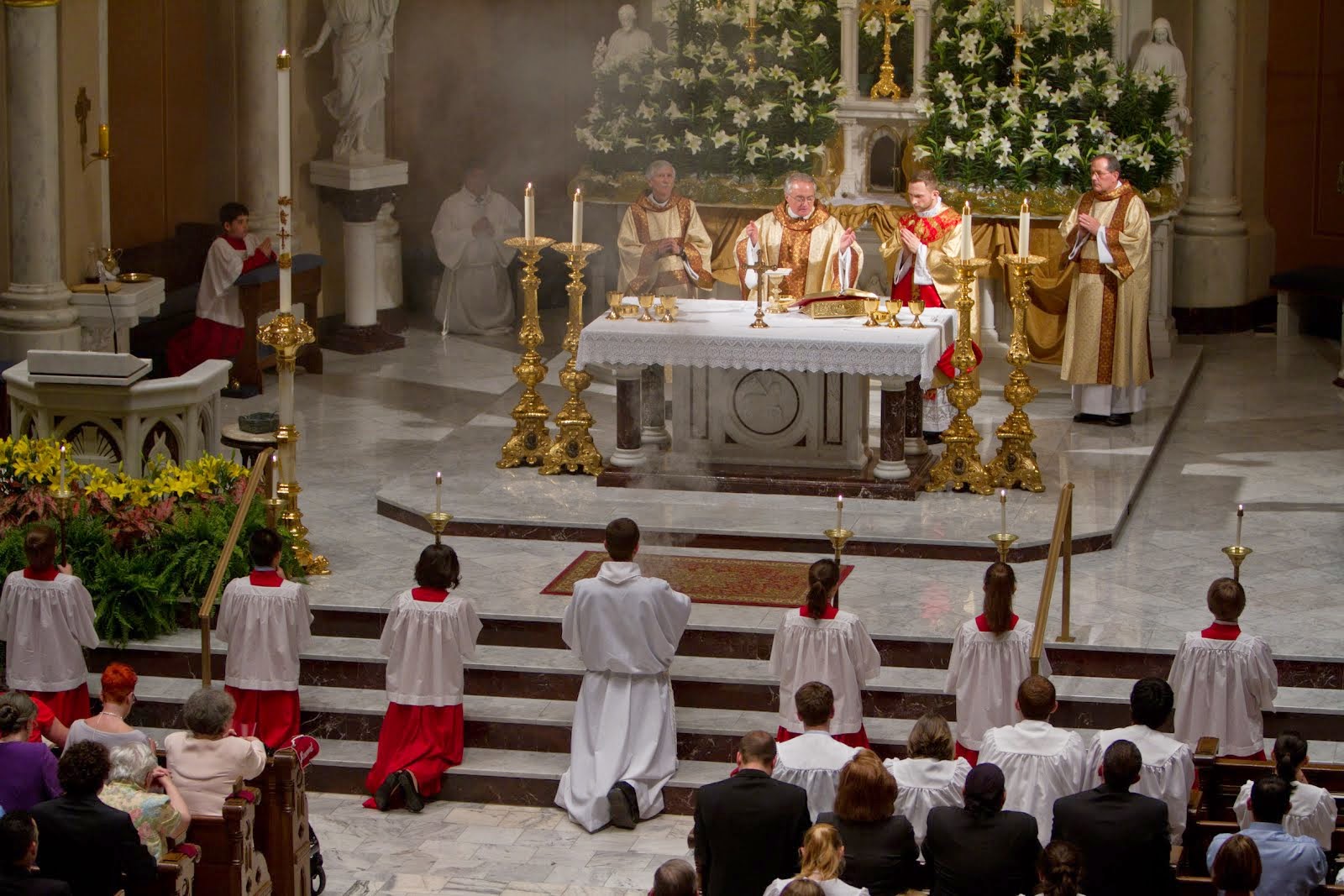 For them, it is absolutely necessary that the bread and wine even prior to the consecration and offering of the Sacred Body and Blood of Christ to the Father, be seen by the congregation and be as close to them as possible. Food and Drink as well as food and drink are what is emphasized.

I happen to disagree with this theology, although it isn't a wrong theology just wrong headed.

In the ad orientem style of the Liturgy of the Eucharist, the bread and wine is not emphasized as much as the Bread and Wine. The elements placed on the altar are normally hidden by the priest who stands in the same direction as most of the congregation.

During the lead-up to the sacrificial offering, the priest only shows the consecrated Bread and Wine at the elevations immediately following the consecrations. Then the Eucharist Prayer formally offers our Lord and His sacrifice to the Father--in an "unbloodly" way.

Following the Great Amen of the Eucharistic Prayer is when the preparation begins for the Sacred Banquet, the meal aspect of the Holy Sacrifice. This is the Rite of Holy Communion. At the precise moment following the Agnus Dei, the priest turns with Chalice and Host towards the congregation and exclaims, "Behold the Lamb of God...Ecce Agnus Dei..." which initiates the meal aspect of the Holy Sacrifice. Then the priest completes the Sacrifice by consuming the Body and Blood of our Lord and He must consume the Host and drink the Precious Blood. He must do both; it is not an option based upon either being completely Christ, both must be received.

The laity then who are in a state of grace are invited to the Banquet properly dressed in the sanctifying grace of forgiveness of sins. Today and under expanded norms allowing the laity to receive both elements and approved by the Holy See, they are able to eat and drink as the Scriptures make explicit during the institution of the Mass on Holy Thursday and in what Jesus says to all in the Gospel of John's "Bread of Life" discourse.

The ad orientem position of the priest makes clearer the two aspect of the Holy Sacrifice that are intimately bound together in a unity.
Posted by Fr. Allan J. McDonald at Thursday, May 15, 2014

Well said. The "Lord's Supper" aspect of the Holy Sacrifice is the Rite of Communion, not the whole Mass. The Altar is first and foremost the Cross, and secondarily the Cenacle table.

Picture #1: all about Christ and Him crucified for us..
Picture #2: all about the priest literally glowing in the light
focused on him...

I highly recommend the book, "The Hidden Manna:
A Theology of The Eucharist," by James T. O'Connor
from Ignatius Press. Every literate Catholic should read it.

"The ad orientem position of the priest makes clearer the two aspect of the Holy Sacrifice that are intimately bound together in a unity."

## It also has an eschatological reference. The priest faces East because that is the traditional compass-point from which the "sign of the Son of Man" (St. Matthew 24.30) was expected to appear, when He came again to judge the nations. It was natural for the "sign" in that passage to identified with the Cross.

All of which makes the "eastward position", facing the altar containing relics of the Saints (itself a sign of Christ, the Rock of the Church, in Whom His Saints are present) beautifully apt.

The "revised" Missal is desperately threadbare by comparison. It is too intellectual, not adequately human. Words are all very well, but the signs - in the broafdest sense - in which the traditional Liturgies are so rich, have been stripped in the "revised" Mass.

There seems to have be an unspoken(?) assumption that the numerous signs in the pre-1965 Missal are fussy accretions, that "got in the way" of the proper & devout celebration of Mass. They are not, are not meant to, and need not - any more than the physicality of praying the Rosary "gets in the way" of praying it. The signs are used because we are not disembodied intellects, nor are we angels, but men: being who must perforce pray to God as body-soul unities, if we are to pray at all. The Mass is not something man has created, but a Saving Act of God into which we are permitted, even commanded, to enter; which is possible only if it can be re-presented - which is what Jesus commanded. It is IOW a re-enactment by men of an Act by God: IOW, a sacred (& sacramental) drama. But drama involves actors, props, actions & gestures that show intentions, that sort of thing. They make up a coherent drama in which there is a place & function for everyone, each of whom must "play his part". The "revised" Missal does not respect this many-sided character of the Mass, but pays little attention to some of its aspects. This is a structural flaw - rather than a lack of detail that can be made good by the organic growth of the Mass. The Mass was a living, organic, reality - in its place, Catholics of the Roman Rite have been given something pre-fabricated and lifeless, that needs to be made lively by "gimmicks".

It was a terrible blunder of JP2 to decide that the altar need no longer contain relics; just as it is very bad that several altars (as they are meant to be) are tables of wood or glass, even if they are nothing worse. Ugliness in its materials is almost a fifth mark of the Conciliar Church.

In the West, because of the various Eucharistic heresies, has more of an emphasis on the sacrifice. The East did not have those heresies, as such, there's less of a formal definition, and you see more of the Mystical Banquet aspect.

The problem in using the theology of the East is that while the substance of the Faith is the same, it doesn't quite fit with the theology of the West as such we should avoid using Byzantine theology to describe what happens in the west...the use of table, gifts, and other Byzantine terms has unintentionally undermined things in the West.

AngryCat makes some important points. It would be interesting to know if dissatisfaction with the liturgy of the Roman Rite before 1962 was widespread or confined to the small clique of intellectuals (mostly clerics) associated with the Liturgical Movement. I was scarcely into my teens when the 'reforms' began to be imposed, but the only complaints I heard from my parents' generation concerned not the liturgy but the somewhat saccharine pietism of certain popular devotions, with sentimental Victorian hymns sung far too slowly.

In the years that followed, we were constantly being told by the Vatican, the bishops and the Catholic press that people were overjoyed with the new vernacular liturgy with its 'active participation' - it was what they had always been yearning for, although they were not clever enough to realize it, and had to be shown the way by their intellectual superiors.

There are historical parallels. As Cranmer moved from orthodoxy to heterodoxy his criticisms of the Sarum Use of the Roman Rite were similar to those advanced by the 20th century reformers. The accession of the Protestant boy-king Edward VI allowed him to impose his liturgical agenda, just as the election of Paul VI gave Bugnini and his acolytes the green light to proceed. And don't forget that the pope took a keen interest in the work of the Consilium and made frequent interventions, as Bugnini himself testified.

Cranmer was well aware that the Mass was enormously popular in England (and even if he hadn't been, the Prayer Book rebellion of 1549 would have reminded him). Protestantism had no deep roots. The 1549 Prayer Book was an interim rite and was superseded by the 1552 Book which with some alterations became the 1662 BCP. However, modern historians believe that had Edward VI lived Cranmer would have moved the schismatic and heretical English Church beyond the Prayer Book to a more extreme Continental form of Protestantism.

Bugnini also believed his and Paul VI's Missal would last a mere twenty years and that the idea of a standard Latin liturgy with approved translations would give way to locally generated texts. ICEL 1973's 'dynamic equivalence' did this to a certain extent and the rejected 1998 Sacramentary took it a stage further. This revolution has been halted for now, even partly reversed, but there is no guarantee that it might not be re-started sometime in the future. Fortunately there is a fall-back position since the pre-Conciliar liturgical books (including, crucially, the Roman Ritual) remain in force and in use.

I wonder where AngryCat got the impression that St John Paul The Great decided that there no longer need be relics in the altar? I have read the following:
"The General Instruction of the Roman Missal, No. 302, contains the following statement: "The practice of placing relics of Saints, even those not Martyrs, under the altar to be dedicated is fittingly retained. Care should be taken, however, to ensure the authenticity of such relics."

This statement summarizes the more detailed treatment of this question found in other documents such as the Roman Pontifical, Dedication of a Church and an Altar, and in the Ceremonial of Bishops.

No. 866 of this latter book indicates the basic norms for relics:

"The tradition in the Roman liturgy of placing relics of martyrs or other saints beneath the altar should be preserved, if possible. But the following should be noted:

"a. such relics should be of a size sufficient for them to be recognized as parts of human bodies; hence excessively small relics of one or more saints must not be placed beneath the altar;

"b. the greatest care must be taken to determine whether the relics in question are authentic; it is better for an altar to be dedicated without relics than to have relics of doubtful authenticity placed beneath it;

I have also read that relics were placed under the altar rather than imbedded in the altar so they could be taken away in times of persecution.

Good point, Joe Potillor. When they say "Eucharistic Banquet", they mean the Heavenly Wedding Feast of the Lamb, while when we say it, we mean a prayerful block party!

It is a small ceremony, but one which, I think, captures this sense.

In the E.F. at the offertory the host is placed on the corporal - a sacrifice placed on the Altar - and then having been consecrated and offered in sacrifice, the patten is slipped under it, and thus the body of Christ is now a banquet on which we can feast.

In the O.F. the consecration takes place on the patten - I wonder whether we have lost something in this seemingly small change.

Moderate - The host on the paten is as much "placed on the altar" as it is when "placed on the corporal." In both cases there are other things between the host and the altar.

Also, there is the matter of the small hosts that are never placed on the corporal, but are consecrated in a ciborium or a deep paten or some other container. Are these hosts not a part of the true sacrifice? One cannot say that the large host, placed on the corporal or the paten, is the one that is sacrificed while the other are not.