IS THE LCWR LEADERSHIP LIKE THE CHARACTERS ON THE COMEDY "THE BIG BANG THEORY?" 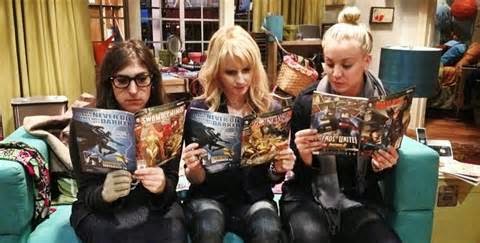 In answer to my question in the above headline, yes and no. The LCWR is far from funny and completely sad and they are real characters as opposed to the fictional ones on "The Big Bang Theory" who are completely funny and sad in a pleasant sort of way.

The following is from the National Catholic Register written on February 18 of this year on some of the heresies that the LCWR's leadership either actively promotes or endorses even in a tacit way. It gives you some insight into the gnostic heresy of the LCWR's active endorsement of Conscious Evolution. I would dare say that Ann Carey in her article below is clairvoyant or the Vatican reads her stuff and listens to her sanity! (Read what I have highlighted in red in the last sentence of the article below!)I'd suggest giving Ann Carey a leadership role in the Vatican since Pope Francis wants more women who are of sound mind and theology to have a greater role in the Church!


Women Religious and the New Cosmology

New-Age spirituality is often thought of as a fad from the 1960s and 1970s that went out of vogue long ago. However, among some Catholics, including some members of religious orders, New-Age spirituality still is being promulgated — and its proponents are becoming more overtly critical of Catholic doctrine.

New-Age proponents blend aspects of ancient and Eastern spiritualities with the Christian tradition. A common claim is that the "Age of Pisces" — the Christian Age — ended in the last half of the 20th century, and a new "Age of Aquarius" is ushering in 2,000 years of human enlightenment, increased and evolving human consciousness and a universal love for all humanity as well as the planet.
This feel-good, diffuse spirituality allows for no confirmed doctrines, responsibilities or limits and has been denounced by the Catholic Church as well as many Christian denominations.

In 2003, the Pontifical Councils for Culture and Interreligious Dialogue issued the instruction "Jesus Christ, the Bearer of the Water of Life: A Christian Reflection on the ‘New Age,’" calling New-Age spirituality "heterodox," distorting God’s word and replacing it with purely human words.

In spite of this clear instruction, a few New-Age concepts still are promoted vigorously in some Catholic circles. One of these concepts, called "the new cosmology," is being used to characterize Catholic doctrine as flawed because it allegedly is based on outmoded science. Variations of the new cosmology challenge belief in settled tenets of the Catholic faith, including the very nature of the Trinitarian God and the role of Jesus as Redeemer.

New cosmology also dismisses hierarchal order as well as so-called "dualisms" (defined as absolute truths). It holds that God, as a sort of "Earth Spirit," permeates every bit of matter and is part of the evolving universe, a theory called panentheism.

As Michael Morwood explains in his book It’s Time: Challenges to the Doctrine of the Faith (self-published under Kelmor Publishing, 2013): "The thesis of this book is that much of Catholic doctrine, specifically defined dogma about God, Jesus and Mary, being safeguarded and promoted by the CDF [Congregation for the Doctrine of the Faith] on behalf of the Roman Catholic Church, has outlived its use-by date. … There are undeniable implications for and challenges to traditional doctrine when the notion of God as a heavenly deity is replaced by an understanding that the word ‘God’ points to a Mystery that permeates everything that exists" (pp. 3-4).

According to Morwood’s website, he resigned from the priesthood and his religious order after the Congregation for the Doctrine of the Faith and the hierarchy in his native Australia silenced him because of errors in two of his earlier books. Yet Morwood’s website shows that he speaks regularly at retreat houses in this country that are sponsored by Catholic sisters, and his book seems to be circulating within some religious orders.

Many of these aspects of New-Age spirituality that challenge Catholic doctrine were refuted by the Committee on Doctrine of the U.S. Conference of Catholic Bishops in a March 2011 statement evaluating the book Quest for the Living God: Mapping Frontiers in the Theology of God (Continuum, 2007) by Sister of St. Joseph Elizabeth Johnson.

Some of the errors identified by the bishops included elements of the new cosmology, such as the author’s view on panentheism, which they said "undermines God’s transcendence, in that God’s manner of existence, as Creator, would no longer differ in kind, but only in degree, from that of all else that exists."

Yet, in spite of such concerns and warnings, the new cosmology remains a mainstream interest among some Catholic laity and religious, and this is not a rare or hidden phenomenon. For example, the 2012 documentary film about women religious, Band of Sisters, includes an interview with Immaculate Heart of Mary Sister Nancy Sylvester promoting the new cosmology.

The new cosmology also was cited as one of the problems found by the CDF doctrinal assessment of the Leadership Conference of Women Religious (LCWR).

Archbishop Leonard Blair of Hartford, Conn., who, as bishop of Toledo, Ohio, had conducted the assessment, explained in an open letter published in the June 8, 2012, Toledo diocesan paper: "LCWR speakers also explore themes like global spirituality, the new cosmology, earth-justice and eco-feminism in ways that are frequently ambiguous, dubious or even erroneous with respect to Christian faith."

Nevertheless, just two months after that letter, the LCWR annual assembly in August welcomed as its keynote speaker Barbara Marx Hubbard, a proponent of the new cosmology.

In 2013, Franciscan Sister Ilia Delio likewise gave a keynote on the new cosmology at the LCWR assembly. DVDs were made of both keynotes and sold by the LCWR.

Among the more startling concepts proposed by Sister Ilia in her keynote, "Religious Life on the Edge of the Universe," was: "There is no cosmos without God, and no God without cosmos." This contention, of course, is in direct conflict with Catholic teaching. The Catechism of the Catholic Church explains that God creates all things from nothing, including the cosmos, and he is not dependent on his creation.

Still, the winter 2014 issue of the LCWR Occasional Papers is dedicated to the new cosmology, with several of the authors referencing both Sister Ilia and Barbara Marx Hubbard.
It is time for the new cosmology to be retired, along with other worn-out fads from the 1960s and 1970s. Surely such New-Age theories, based on flawed logic and misinterpretation of science, pale in comparison to the rich deposit of the faith in sacred Scripture and Tradition entrusted to the teaching office of the Catholic Church.

Pope Francis even alluded to the failure of such theories in a June 2013 homily on the Gospel reading about Jesus teaching his disciples to pray the Our Father, as reported by the Catholic Herald: "You must pray to the Father," the Pope said, not to a "cosmic god," a "polytheistic model that comes from a rather light culture."
Will 2014 be the year that the Holy Father’s message is heard and accepted by the new cosmologists who claim that they are also Catholic?
Ann Carey is the author of
Sisters in Crisis: The Tragic Unraveling of
Women’s Religious Communities
and Sisters in Crisis Revisited:
From Unraveling to Reform and Renewal

Since a Catholic priest originated the actual Big Bang Theory, I would say a situation comedy named in its honor should be at least as Catholic as the LCWR.

This is not new. It is Socinianism, Process Philosophy, Charles Hartshorne, Whitehead, etc. Gobbledygook and pure nonsense. Roll another joint, darlin', and hand me my copy of Jopnathan Livingston Seagull.

Also such things as the Urantia Foundation and Carlos Castaneda.

One cannot cease to wonder at the prodigality of human creativity and imagination.