POPE FRANCIS HOMILY TODAY SEEMS TO BE SPEAKING TO FAITHFUL CATHOLICS IN MACON! 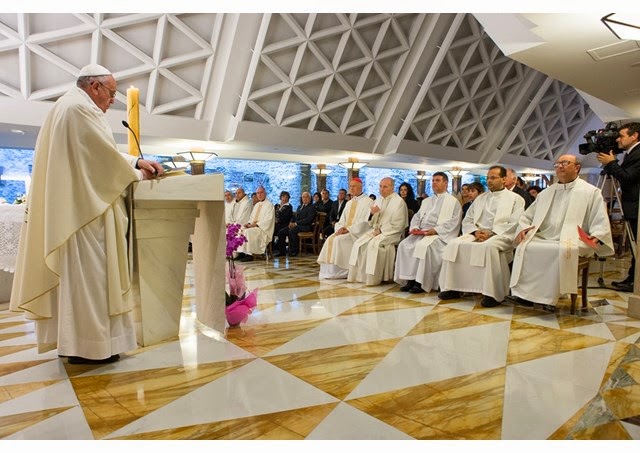 I report; you decide. Is Pope Francis speaking about picking up one's cross and following Jesus even if the world says no, do it our way? Did he read Macon's newspaper this morning and its worldly take on religious events?

Pope Francis based his homily [on Friday morning May 30th] on the observation that St. Paul "was very brave", "because he had strength in the Lord”.   Of course, he noted, sometimes even the Apostle to the Gentiles was afraid. "It happens to all of us in life, to have some ‘fear’ he added.  So much so, that sometime one wonder’s whether "it would be better to keep a lower profile, to not be a little less Christian and seek a compromise with the world".

However, Paul knew that “neither the Jews, nor the Gentiles" liked what he did, but this didn’t stop him and in the end he endured hardship and persecution. The Pope said that this should make us think about our fears.   Even Jesus in Gethsemane felt fear and anguish. And in his farewell speech, to his disciples clearly says that "the world will rejoice" for their suffering, as was the case with the first martyrs in the Coliseum.

"But - he continued - there is another sadness: the sadness that comes to all of us when we take the wrong road". When , "to put it simply", "we try to buy happiness, joy, [the happiness and joy] of the world, of sin.  In the end there is a void within us, there is sadness". And this, he reiterated , "is the sadness of  the wrong sort of happiness". Christian joy, "is a joy in hope, which comes".

Excellent quote from the Pope.

May God bless you, Father, and the faithful Catholics of Macon.