ANOTHER JET-SETTING INTERVIEW BY THE POPE 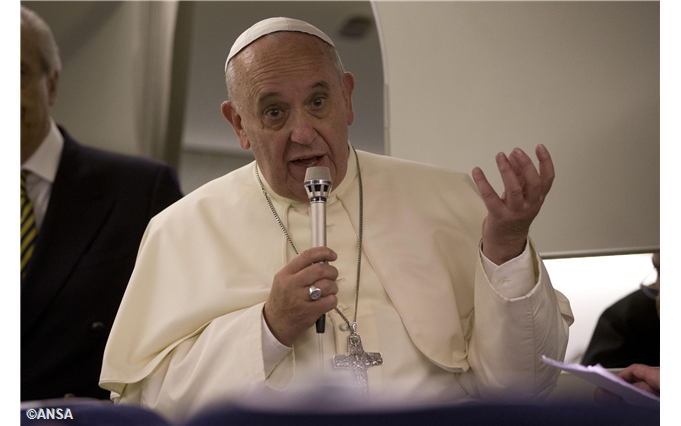 (Vatican Radio) Despite the grueling schedule of his three day pilgrimage to the Holy Land, on Monday evening Pope Francis held an hour long in-flight question and answer session with the journalists who had accompanied him.  The Pope responded to their questions on issues that ranged from the Churches’ efforts in combatting the sexual abuse of minors by clergy, to the reform of the Curia. The Pope addressed questions that have arisen ahead of October’s Synod on the family, regarding the situation of divorced and remarried Catholics, he spoke of future papal travels and dwelt the modern day reality of Christian martyrs for the faith.

Responding to a question on the Churches handling of the abuse crisis, Pope Francis stated that there will be no preferential treatment when it comes to child abuse. That three bishops are currently under investigation for and one has been convicted with punishment pending.  Such abuse is a betrayal of the Lord’s body, he said.  He then announced that next week he will hold a two day meeting with survivors of abuse and celebrate mass with them at his residence in Casa Santa Marta.

Responding to a question on the issue of communion for divorced and remarried Catholics, which has arisen ahead of next October’s Synod on the Family, Pope Francis lamented that the entire Synod should be boiled down to this one issue.  He noted the real issue is the crisis that the family is undergoing today with a drop in the number of young people choosing to marry.

However, the Pope did add that the procedure of preparation for marriage and annulments of marriage needed further reflection. He also concluded that divorced Catholics must not be treated as if they had been excommunicated.

He also answered a question on priestly celibacy, noting that the Catholic Church has married priests in the Eastern rites, that celibacy is not a dogma of faith but a rule of life that he appreciate a great deal and believes is a gift for the Church.

Regarding the reform of the Curia, Pope Francis laughingly confessed that he himself is perhaps the greatest obstacle to it.  The Pope revealed that the organization will be made lighter, by merging dicasteries.

He also revealed that there are two Asian trips planned: one to South Korea and then next January, a trip to Sri Lanka and the Philippines.

Finally, answering a question as to whether he too – like Pope-emeritus Benedict XVI – will choose to resign from the papacy, Pope Francis stated that his predecessor had “opened the door” to such a possibility, but that he  will do what the Lord tells him to do.

My Comments: Catholics who are divorced but remain unmarried have no censure against them. They may receive the Sacraments of the Church. Those who are in sacramental, i.e. lawful, marriage in the eyes of the Church, but obtain a civil divorce for legal purposes, but then marry again outside the Church, are not excommunicated, but a censure is placed against them--they may not receive the Sacraments of the Church except in a life/death emergency. This is an "interdict" of sorts and as with excommunication a clarion call to rectify the situation that has brought about the censure and to be once again fully reconciled with the Church and thus with Christ since the two cannot be separated as some heterodox Catholics are wont to do.

Also, as I have written time and time again, the synod on the family isn't going to issue heretical statements about marriage. But it will look at the annulment procedures, and this is where I am clairvoyant, it will look at both the internal and external forum and clarify both and add grounds for annulment. It will clarify the canonical process, streamline it especially in countries where there may not be adequate tribunals in diocesan offices and encourage lay Catholics to use this process and not make it up as they go (such as receiving Holy Communion on one's own authority because one doesn't believe in the annulment process--a form of the heresy of gnosticism).
Posted by Fr. Allan J. McDonald at Tuesday, May 27, 2014

What you neglected to mention was the statement by Francis that he was "unhappy by men with in the Church who concentrated on one thing that Kasper said (communion for those living in adultery). That's most likely a shot at Cardinal Burke. But I'm unhappy with a pope who doesn't seem to have a problem with allowing sacrilege.

The treatment of the Pope's visit to the Middle East by the BBC shows that even the liberal media recognize that in diplomatic terms the Holy See is a major player.

The Pope has to know what he says is on a microscope...

I will play FrAJM for a bit: the key to consent is full, or adequate knowledge. Considering the abominable state of Catechesis at the hands of our clergy I think it is possible many marriages could be considered invalid based on the corrupt knowledge the couples have and had of marriage as a sacrament. That point of view may come from the synod.

The Pope says Mahmoud Abbas is a "man of peace."

Can we get a vote for Hitler?